Kenya's Hellen Syombua on Tuesday morning bowed out of the Tokyo 2020 Olympics after she failed to qualify for the semi-finals of the women’s 400m at the Japan National Stadium.

Running from lane eight in heat five, a powerful push on the final stretch saw Syombua cross in a time of 52.70 to finish fifth, behind Irish Phil Healy who clocked 51.98. 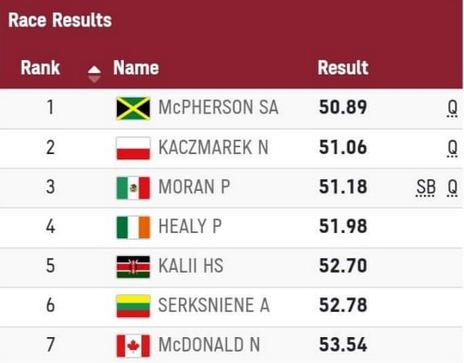 Natalia Kaczmarek of Poland was second at 51.06 with Mexico’s Paola Moran third at 51.18.

Thank you for making us proud

Is there any doubt that Kipchoge is now the Greatest Of All Time?

While in the US, Waithera won the NCAA Division 1 Women's Indoor Championship (400 metres) in 1984, the same year that she set a Kenyan national record.

Before Syombua stormed to 51.09 on June 22, 2019 in Nairobi, Waithera’s record had only been threatened by Elizabeth Muthuku.

However, Muthuku's time was never recognised. Before that, no other Kenyan woman had ever run a faster time than the 51.56 set by Waithera in 1984, until Syombua slashed 47 macro seconds off it.

Personal best: She is the national record holder with a time of 51.09 seconds.

Kenya's Cheruiyot advances to 1,500m semis in quest for gold World champion Timothy Cheruiyot of Kenya, a late addition to the Olympic team after init