Ben Jipcho, the man who sacrificed his gold medal ambitions in 1500m by playing the rabbit for Kipchoge Keino at the 1972 Olympics, is dead.

According to one of his sons, the 77-year-old passed away at 3:08 am on Friday at the Moi Teaching and Referral Hospital, Eldoret, where he has been receiving treatment. 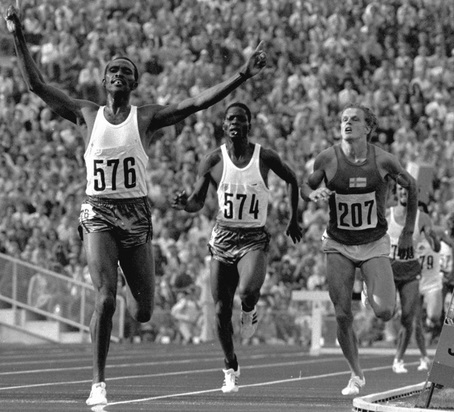 Jipcho rose to prominence at the 1968 Olympic Games in Mexico,  when he played the rabbit as Kipkeino beat American great James Ronald "Jim" Ryun in the 1,500m final.

Jipcho, who hailed from Mt Elgon, was one of the foremost ‘rabbits’ – a tactical term in athletics in which a team often sacrifices a runner for sake of the team.

Lanky and powerful, Jipcho pulled Kip through a blistering 56-second first 400m in Estadio Olímpico Universitario during the 1968 Olympics leaving Jim Ryun gasping for breath, a devastating blow the American would not recover from.

He also won a gold medal in 5000 m and 3000 m steeplechase, and bronze in 1500m at the 1974 Commonwealth Games in Christchurch, New Zealand. Tributes have been pouring in from across the country following the death.
Reacting to the sad news, Sports Cabinet Secretary Amina Mohamed tweeted;

It is with profound sadness that I’ve learnt of the passing of legendary athlete #BenJipcho this morning. #HeroJipcho will be celebrated as one of ????????’s most accomplished athletes whose excellence put ???????? on the global sporting map as early as 1968 at the Mexico City Olympic Games. pic.twitter.com/NwH1nOwGQZ — AMB.(Dr.) Amina C. Mohamed (@AMB_A_Mohammed) July 24, 2020

Athletics great Kipchoge Keino also paid tribute to Jipcho saying he was gutted by the news of his demise.

“Jipcho is a part of me. All my success was down to his competitiveness. We complemented each other and you could see his career also blossomed because of our partnership,” Kipchoge said.

“It is unfortunate he has left us. His place in the history of world athletics and Kenya is assured. May he rest in peace.”

“We struck an unbreakable bond after I brought him from Maseno and took him to Kiganjo for training. The togetherness became the bedrock of our success and indeed for Kenya as we put our country on the world map,” Kipchoge told Standard Sports.

“The Mexico Olympics will remain etched my mind for the rest of my life for the part Jipcho played as we struck gold when I beat Jim Ryun in1500m,” Kipchoge said.

“Jipcho was selfless, he paced the race for me and we finished Ryun. That was the greatest moment of patriotism. He could also have won, but he felt I had the better chance to win gold for Kenya, which did against a formidable American challenger at the time,” he said.

The athletics great said he noticed Jipcho’s talent and took him from Maseno to Kiganjo where they honed their talent.

“I trained him and soon he quit teaching to join Kenya Prisons where his athletics talent blossomed. Thereafter, together, we started recruiting talent – Jipcho took many athletes to Kenya Prisons while I took others to the Kenya Police where I was serving,” Kipchoge said.

“It is unfortunate he has left us. His place in the history of world athletics and Kenya is assured. May he rest in peace,” Kipchoge said.

The National Olympic Committee President, also an athletics great Paul Tergat, said he was profoundly shocked by the news of Jipcho’s passing away while describing him as “a fearless warrior of his time.”

“It is tragic news, a sad day for sporting world,” Tergat said.

“On behalf of my family and the National Olympic Committee of Kenya, we pray for his family at this difficult time that they may get the strength to deal with this tragic news,” Tergat said.

Describing him as a pioneer of Kenya’s athletics tradition alongside other greats, Tergat said the country had lost an icon, “a true son of Kenya.”

“Off the track he was a brilliant and intelligent man, very engaging and you couldn’t ignore him because of his charisma,” he said.

“Together with Kipchoge Keino, Amos Biwott, Ben Kogo--- these men set the bar so high that the younger generation has a responsibility to maintain and also take it to another level,”

“Jipcho overcame so many hurdles to emerge from the Sabaot people of Mt Elgon. Besides putting his people in the collective psyche of the Kenyan nation, he inspired generations of athletes including ourselves,” Tergat said.

“It pains me that after a strong foundation that Jipcho and his peers laid, there is a generation of athletes who are soiling the name of this country by way of violating anti-doping rules.

“It is disrespect of the highest order for the pioneers of athletics such as Kipchoge, Jipcho and so many others that athletes are found to have violated the whereabouts rules,”

“How can that be in this modern-day, when you see them tweeting, Facebooking and being online for 24hours then they miss tests? Come on, we cannot feign ignorance and want the world to believe us,” Tergat said.

“We must honour the work done by our athletics greats such as Jipcho, some of the athletes who ran barefoot, by running clean,” he said.