Viv Bolts to victory: Thanks to blessings from Usain St Leo, says Cheruiyot 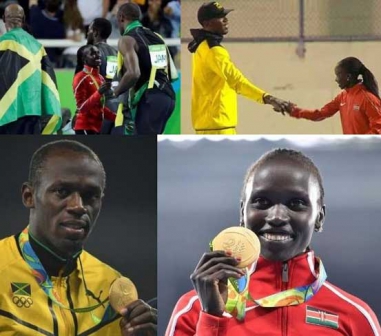 “Bolt is my friend and we met at the call room when he was preparing for the relays while I was coming to the track to compete and he told me go and run well and wished me all the best,” an elated Cheruiyot said after winning the 5,000m race.

She said they share the management team, PACE Management of Ricky Simm, and Bolt always wishes her well before a race and she was over the moon that his blessings worked and she won the the gold medal.

She also said she was dedicating the win to her family, her husband and her son Allan and all Kenyans who supported her while she was looking for the gold medal.

“When the bell sounded I could not believe that it was me Vivian going to win that gold medal. I still can’t believe that I have beaten Ayana. Thanks to everyone who have supported me in this journey,” Cheruiyot said.

“Hellen (Obiri) had told me that we should not fear Ayana since she can be beaten like any other person. And when I saw that I had overtaken her and she did not react and I realised that Hellen was following me for silver, I was very happy.”

Cheruiyot said before overtaking Ayana with two laps to go, she was very cautious as she did not want to react that fast as she was not sure what Ayana would do.

She said she was planning on running half marathon in Newcastle next month, but that does not mean she was quitting the track just yet.

“After the half marathon, I will try and run the London Marathon, but I will be back to defend my world titles at the World Championships in London,” she said.

She also advised athletes who want to take a break and bring up babies that they should not fear as they will come back strong just like Obiri and herself.

Obiri said she still cannot believe she won silver at the Olympics after stepping up from the 1,500m race.

“We said that there were no men in that race. We knew we are all girls and if it meant dying on that track, we were ready for that.

“We kept speaking with Vivian when we realised that Ayana was getting tired and with two laps to go, I realised we were going to win it and finally we have proved that Ayana is beatable,” Obiri said.

Wanjiru clocked 1:37:49 and declared she was happy to have completed the race which was held under very difficult conditions.