At a sleepy and dusty village in Kitui County, a group of farmers have successfully kicked poverty out of their homesteads by keeping Togenberg breed of goats, which are famed for their milk production and good prices in the market.

Mr Munuve Mutemi, a member of the group, is the association’s chairman. He says so far, they have 1,000 members, 600 of them being women. The association has slightly over 2,000 goats, which have improved the livelihoods of the members.

“We started in 2005 organised by Farm Africa which identified poor people in the community and donated the goats. Since then, we have never looked back,” says Mutemi.

Each group has a ‘buck station’ and ‘breeding station’. The ‘buck station’ is like the factory of the group. Here, a pure gigantic Togenberg goat, is kept purposely to mount female goats. It feeds strictly under zero grazing and is only unleashed when a female goat is brought for mating.

“The he goat is used to cross breed indigenous goats of both group members and non-members. It is also used to upgrade the crosses so that we get an almost pure Togenberg breed,” explains Mutemi.

Through cross breeding, the farmers can now get between three to four litres of milk per day per goat compared to half a litre produced by the indigenous goats. The farmers sell the milk at between Sh80 and 100 per litre in schools, homesteads and hotels.

However, the farmers fetch good returns from selling the cross breeds.

Mr Mutemi, who doubles up as the group’s veterinary officer, says they aim at second generation cross breeds with 75 per cent genetic traits of the hybrid and 25 per cent of the indigenous. This is to ensure the animals can withstand the harsh climatic conditions in the county and are resistant to diseases.

To avoid inbreeding, Mutemi says they do ‘buck movement’ whereby the he goat is transferred to another group after one and a half years. “This prevents kids being born with disabilities or being of poor health,” he says.

The group’s identify a ‘buck keeper’ where the he goat is kept. At Nzeluni farmers group, Esther Syengo is the proud ‘buck keeper.’ Her home is a beehive of activity as members bring their female goats which are on heat to be mounted.

When Smart Harvest visited her homestead, we found the mother of three feeding the giant goat, which was declared a ‘champion’ in the just concluded Nairobi International Trade Fair. Last year, the four-year-old goat nicknamed Mohamed because of its bushy hair was declared ‘overall champion’ at the same event and the keeper was awarded a cash prize.

Obviously, the goat brings much joy to Mrs Syengo, who this year became the envy of many farmers after she shook hands with President Uhuru Kenyatta for keeping the champion. Syengo says Mohamed can service six female goats in a day and at four years, he is now a proud father of about 2,000 kids.

“Goats are mostly on heat when it is hot as compared to cold months,” she offers. Whenever he spots a female goat, Mohamed gets overly aroused and becomes restless, aware that his services are needed.

For a goat to mate with Mohamed, members pay Sh30 while non-members pay Sh50. Ten per cent of this amount goes to the group’s account while the keeper retains 90 per cent to cater for drugs and feeds.

A ‘buck keeper’ should be an active member of the group and one who is sociable and acceptable by others, because members would be badging at her homestead frequently seeking services of the he goat.

“I became a buck keeper in 2005. Since then I have kept four he goats all of whom won at the show,” Syengo says. “I keep clean records on who brought which goat, when and when it was collected.”

Over time, she has been able to cross breed her indigenous goats, selling the kids on a need basis. This has enabled her to educate her children effortlessly. “My last born is now in Form Four and I have never struggled to pay school fees. If I sell only two kids, I am able to settle school fees and remain with a balance,” she enthuses.

With surplus milk production, Syengo established two canteens at the village where she sells tea and chapatis.  Another feather on her cap was when the wife of the former United Nations Secretary General Kofi Annan visited her homestead to catch a glimpse of another ‘champion’ she had reared.

The ‘breeding station’ is equally an important segment of goat rearing. It has only four pure Togenberg goats, one of them being a he goat.

According to Munuve, the kids born here are given to members, others sold and a few used to establish ‘buck stations’ or replace old ones. A pure Togenberg he goat of seven months is sold at Sh28, 000.

Mr Mutemi says they plan a dairy milk plant and coolers. “We want to eliminate poverty fully from among our members,” Mutemi, who keeps two pure hybrid goats and a couple of cross breeds, says.

To register as a member, Mutemi says one pays between Sh700 to Sh1, 000 and are thoroughly vetted using respective group’s bylaws.

Mutemi says should a member be in need of a loan, his or her group acts as the guarantor. The loans are payable within one year at 12 per cent interest rates.

“The society is able to market the groups’ products as well as the goats,” adds Mutemi.

However, being in an arid and semi-arid region, the groups are faced with constant droughts. This affects the animals’ feeding and is cause to various diseases.

There is also no proper market for milk and their animals.

Defying the odds: Goat rearing in the most unlikely place

Defying the odds: Goat rearing in the most unlikely place

By James Omoro and Eric Abuga | 10 minutes ago

By Mireri Junior and Winfrey Owino | 17 minutes ago 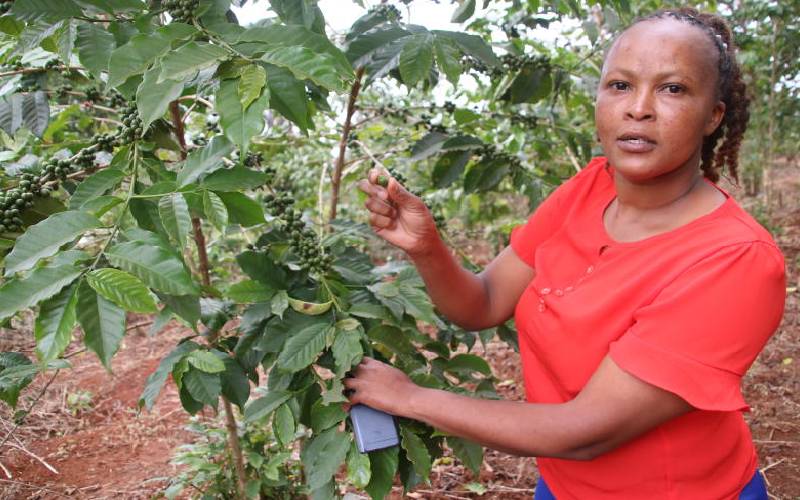