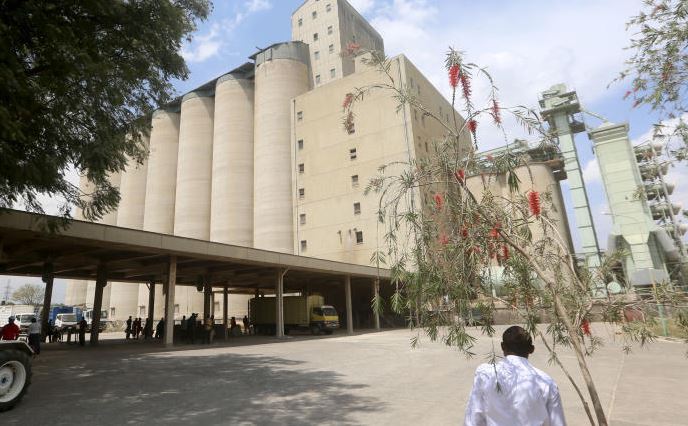 Controversy has erupted over the destruction of 54,000 bags of maize from the National Cereals and Produce Board (NCPB) silos in Nakuru (above), which are said to be unfit for human consumption.

Speaking to Saturday Standard on the telephone, Wekesa said the maize being destroyed was assessed by a multi-agency team, which came up with specific rules to guide the process.

“The maize was to be sold through public procurement to any willing buyer for use as raw material for energy, for example to tea and cement factories, at a fee determined by the tendering team,” he said.

The recommendations on how the produce was to be disposed was arrived at two years ago by a team that brought together representatives from SFR, the Ministry of Health and NCPB.

At least 124,000 bags of maize, which were stored in NCPB silos, were to be destroyed countrywide.

The circular seen by Saturday Standard said the cement factory in Salgaa was directed to help in destroying the maize.

A senior staff at the county government of Nakuru said an officer from the Public Health department from Nairobi was to supervise the destruction. The letter directed Nakuru officials to offer the officer support in executing his duty.

But yesterday, neither the official from Nairobi nor members of the multi-agency team were present at the factory. The team was meant to guarantee proper disposal and prevent the toxic maize from being sneaked out and sold to the public.

None of the factory managers agreed to speak to our team or allow them to take pictures of the maize stack. However, a manager at the factory said they did not buy the maize from the cereal stores.

“How will you buy maize that is not safe for consumption? The maize was given to us for free,” said the source.

At the factory, he said maize was to be mixed with coal, and placed into kiln used to generate heat energy for cement production.

Wekesa wondered why the officials involved did not follow the guidelines laid down by the multi-agency team.

“The maize was to be sold through proper procurement process, and if there is any amount destroyed, then it is contrary to the recommendations. This is corruption which continues being reported at NCPB,” said Dr Wekesa.

Wekesa said the toxic maize had been stored at NCPB silos for two years before it was recommended for destruction. The maize became toxic due to lack of proper storage at NCPB stores. He said some silos at the NCPB stores are leaking.

“NCPB should explain why the maize got spoilt,” he said.

He said SFR should know who is selling the produce and who was awarded the tender.

“The maize should be sold and not given out free. Energy is bought. When trees are sold for energy, are they given free to farmers?” Wekesa posed.

He admitted there is shortage of maize.

At least Sh10 billion has been allocated for importation of maize this year. The money is expected to buy between 300 and 400 million bags. The Sh10 billion was generated from sale of 4 million bags last year. SFR sold two million bags at Sh2,300 per bag and another two 2 million at Sh2,700 each.

A source at the factory said an official from the Public Health department, who was expected to oversee destruction of the maize, did not turn up.

This was out of a sample of 3.9 million bags, which were being held in the NCPB’s stores.

“The 69,000 bags were unfit for human and animal consumption. The maize was seized and isolated and kept in various depots awaiting orders on its destruction through incineration,” Maiyo said.

The statement added: “The contaminated maize is currently being taken from various stores under close supervision by Public Health and the Ministry of Interior for destruction at a cement factory in Nakuru.”