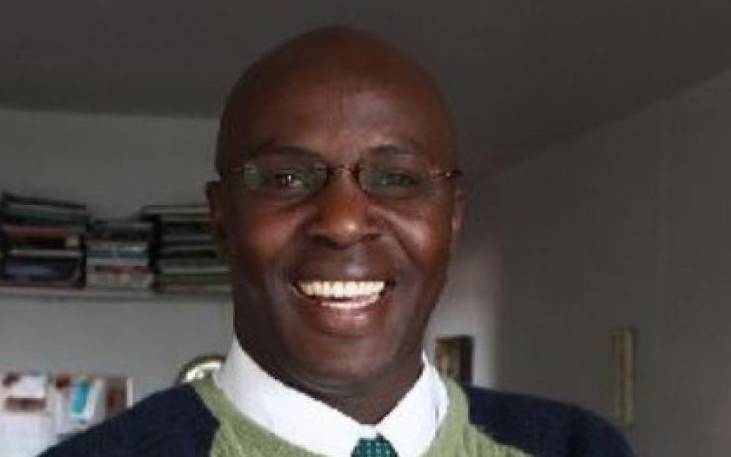 Renowned writer and journalist Ken Waliaula Walibora (above) has been laid to rest.

The burial at his Huruma village, Cherangany Constituency in Trans-Nzoia County, was however attended by only 15 people in line with the government directives to contain the spread of coronavirus.

His wife Ann Chebet and his two children Sheila Zawadi and Katila Samba, who live in the USA, were absent owing to the coronavirus pandemic that has grounded airlines.

Nevertheless, other members of the community followed the ceremony from a distance, standing by the fence and others on the roadsides in solidarity with their fallen son from the hills of Cherangany.

It was not a good day. Perhaps, the opposite of his bestselling novel ‘Siku Njema’ (Fine Day)

Speeches were short and precise as the family called for the speedy investigation into the cause of Walibora’s death, asking the agencies involved to get to the bottom of the incident.

“We want the police to speed up the investigations and tell us what really happened to our brother. Who stabbed him? Where was he running from? We need answers, “said Patrick Lumumba, the family spokesperson.

Although Walibora was knocked down by a matatu on Landhies Road in Nairobi, an autopsy revealed he was also stabbed.

Already, the Directorate of Criminal Investigations has launched an inquiry into the cause of death. The police are following a dispute angle with a publisher to his death. 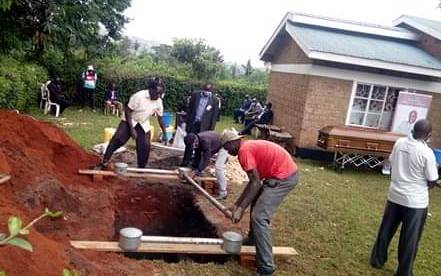 Many eulogised him as a man of the people whose outstanding academic and prolific journalistic skills impacted many.

“He was a committed family man who worked hard to provide for his family. He also left a mark in the academic world. He will always be in our hearts,” said Kibabii University's Vice-Chancellor Odeo Ipara.

Among the scholars present were Prof Ken Inyani Simala Executive secretary East Africa Kiswahili Commission, Dr Mansol Kendago the National Chairman CHAKITA and Dr Sheilah Wandera, a  Kiswahili lecturer in Laikipia University, among others who praised Walibora for his work.

At 2:30 PM, the cortege made its way into the compound. For the last time this time round. Earlier on, some youths had been busy preparing the graveyard.

Guests, who included close family members and a few neighbours, escorted the renowned novelist, writer, and journalist to the grave.

Dull faces and hearts heavy with grief around the grave sang and prayed for the departed soul. They thanked God for the 56 years Walibora lived on earth.

They wept silently eyes red and puffy. The arrow of death had struck right at the heart of the community.

There was a heavy police presence, to make sure the Ministry of Health guidelines were adhered to the letter.

Trans-Nzoia County commissioner, Samson Ojwang had previously issued an order to the organisers of the event, to make sure all went on smoothly. 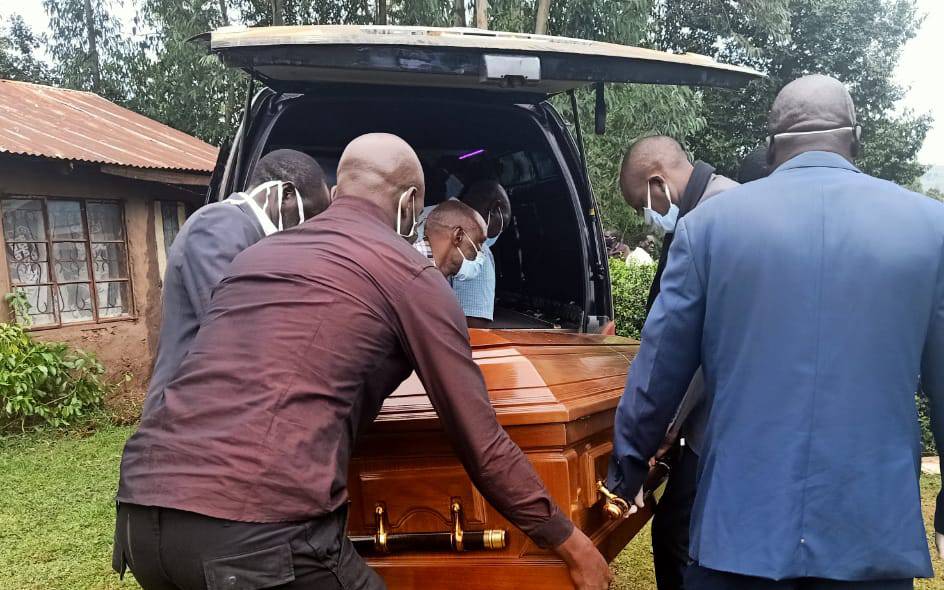 “A crowd will not be allowed at the burial. Even the number of journalists will be restricted at the venue to ensure we don’t violate the restriction,” ordered Mr Ojwang.

Dr Walibora’s stepmother had also given details on the number of members who would attend the event. She, however, expressed her disappointments that most of the members would not attend due to Covid-19.

“We have selected some close relatives, friends and neighbours to be part of the burial. It is sad that the coronavirus situation will lock out many from paying their last respect to Ken,” she explained.

Dr Walibora had 40 book titles to his name among other accolades. Some of his works include Siku Njema, which was a secondary set book between 1997 and 2003. Other popular titles include Kidagaa kimemwozea, and Ndoto ya Almasi.

Dr Walibora was reported missing on Friday, April 10, only for his body to be found at a mortuary in Kenyatta National Hospital.

A long-time friend, who requested anonymity, told Standard Digital that Walibora was driven to Kenyatta Hospital in a Nairobi County ambulance and police drove to the scene where some street children, who had taken his cellphone, produced his ID.

“He had some identification documents and a car key. His family identified the body but they are waiting for the mother to come,” Central Police boss Mark Wanjala said.

The driver who fled the scene after knocking him was later found hiding in Nairobi’s Buru Buru estate.

On April 19, a team of detectives from the homicide unit took over investigations into his death.

This was after an autopsy showed he had a deep cut between his thumb and index finger which was not caused by the motor vehicle accident. He had also lost two of his teeth and had a blood clot in his head.

Chief Government pathologist Dr Johansen Oduor said the wound in his hand was not consistent with a road accident.

“He had a cracked jaw on his right side, his right hand was broken and also he had a clot on his right side of the head, and he had lost two teeth. All these are not common with a motor vehicle accident,” says Dr Oduor.

The detectives extracted CCTV footage of his movements from Lavington to Kijabe Street at about 9.30 am where he parked his car on Friday morning. He then walked from Kijabe Street towards downtown.

Family members told police that he was going to look for a lorry to help transport building materials to his rural home.

Witnesses at Muthurwa market said they saw him run across Landhies Road while being chased by a group believed to be thugs.

“He crossed the first lane running with a group of street children pursuing him. But when he crossed the second lane, he was hit by a speeding matatu. We did not know it was Walibora,” said a witness.

He was employed at the Nation Media Group as Kiswahili news anchor after which he joined the University of Wisconsin, USA, as an assistant professor, African languages.

Later, in recognition for his contribution to the development of Kiswahili, The Aga Khan appointed him as the Nation Media Group Head of Kiswahili, a position he served until he joined Riara University's School of Diplomacy.

In an interview with Daily Nation in 2015, Walibora credited his creativity to his mother in his autobiography, Nasikia Sauti ya Mama, a detail that would make him one of the most famous Kenyan authors in later years.

Ruto puts up a brave show at Bomas