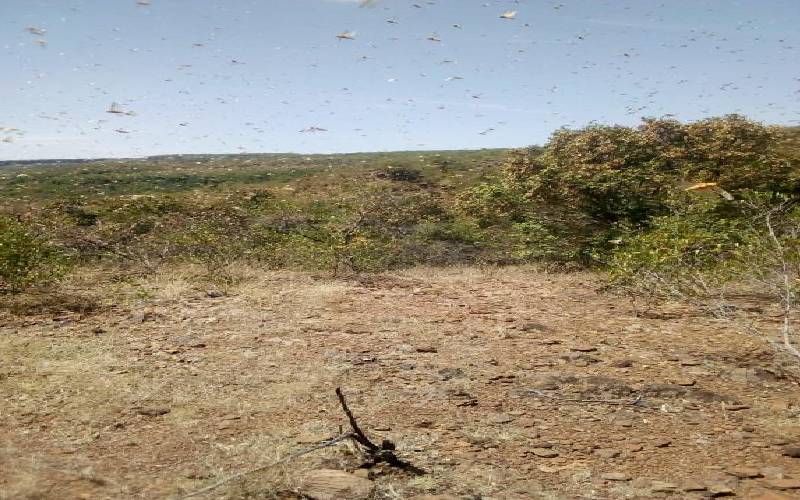 Swarms of the invasive desert locusts have been spotted in parts of Tiaty, Baringo County.

On Monday, the locusts descended on Kamurio and Akoret villages, destroying vegetation in the area predominately occupied by pastoralists.

“Most locals here, being pastoralists, depend on vegetation for their livestock. Sadly, if we do not control them, they might cause more havoc and make our stock lack what to feed on,” said the MCA.

County commissioner Henry Wafula said the insects were spotted on Monday morning, but the magnitude of their invasion had not been fully established.

Where bandits’ bullets have left children with scars, crutches

Wafula said a team had been dispatched to areas where the insects had been spotted for monitoring purposes, and that it would present a comprehensive report for action.

He asked locals not to fear, saying there was a helicopter on standby, which would be used to spray infested areas.

“Intervention measures of controlling spread of the insect are already in place, and we shall act immediately after receiving a report from officers on monitory assignment,” said the county commissioner.

So far, desert locusts have infested Samburu and Laikipia in the Rift Valley region.

Other counties affected are Garissa, Isiolo, Wajir, Marsabit and Mandera.

The desert locusts feed on shrubs, crops and pasture in farms, what might result in food shortages if quick action is not taken to address the infestation.

After his appointment last week, Agriculture Cabinet Secretary Peter Munya said the government was committed to containing the locust to avert food insecurity.

He reiterated, amid fears from residents of affected areas, that there was adequate Fenitrothione chemicals to spray the insects.

The CS admitted that use of ineffective chemicals had hampered control measures.

Elsewhere in Kajiado County, the Department of Agriculture has reported the emergence of a destructive pest known as the variegated grass hopper.

The pests have been spotted in Kajiado East, Kajiado West and Kajiado Central sub-counties and are already wreaking havoc on crops and pasture.

Kajiado Governor Joseph ole Lenku has ordered that teams from his administration address the invasion.

“Apprehensive of the possible destruction of vegetation in the county by this pest, I have directed that mitigation plans be immediately commenced,” said Mr Lenku.

He said that threats of the desert locust is real and the county government, on the advice of pest experts, has begun the process mitigating the pests’ effects.

“These pests are a threat to our food security and must be managed in a manner that eradicates their negative impact on our farms and grasslands,” said the county boss. [Mercy Kahenda, Julius Chepkwony and Peterson Githaiga]

Woman missing for over one week found dead in her house
;
Feedback