It was expected that President Kenyatta’s name would feature in the presidential running mates debate between Martha Karua and Rigathi Gachagua because of strained relations with his deputy William Ruto.

UDA presidential running mate Gachagua had Uhuru’s name on his lips, blaming him for instigating investigations on him over allegations of corruption. The Mathira MP spent significant time accusing the president of allegedly fanning corruption through what he termed “state capture.”

He claimed President Kenyatta used his position to advance family interests, directing independent institutions and public officials to settle political scores and allegedly shielding those close to him from investigation.

“He was lenient because the people involved in corruption are close to him,” Gachagua said of Uhuru’s remarks that he had been ‘soft’ on corrupt individuals. Gahcagua further claimed that the war on corruption was personalised.

Gachagua’s offensive on the president was, seemingly, part of a strategy that the UDA has employed, which also involves piling the president’s burden on Azimio.

National Assembly Majority Leader Amos Kimunya said Uhuru was not a subject in the debate and there was no point in bringing his name into the discussions. Kumunya said the moderators allowed Gachagua so much time to malign the president without allowing him to defend himself.  “There is no way you can blame President Kenyatta and spare his deputy because it was a presidency, so Gachagua cherry picked for political expediency in the debate,” he said.

Ruto, a deputy president for nine years in the Uhuru regime, has claimed credit for the Jubilee government’s successes, which he said happened in the first term.

But he has consistently disowned the failures that include mega corruption scandals that rocked Jubilee’s first term, such as the Eurobond, National Youth Services and Arror and Kimwarer dam scandals.

Political analyst Javas Bigambo argues the DP and Gachagua have a case for denying culpability for Jubilee’s failures, even as he says they cannot divorce themselves fully.

“If Uhuru is in the mud, Ruto too is in the mud... But structurally and operationally, the DP is still in government but he is not politically,” he said.

Gachagua would pepper most of his responses to the moderators’ questions by suggesting that Raila and Karua were part of the government and that they are Uhuru’s puppets.

As she dismissed the claims, Karua said the DP was in fact in government, attended a recent Cabinet meeting, and Gachagua, too, was a Jubilee MP.

She would also dismiss claims that an Azimio government would be a proxy, saying that Uhuru would play a “peripheral role” owing to his Jubilee party’s position in the coalition party.

“I have been vocal in upholding the rule of law and reminded President Kenyatta that he cannot serve beyond his term, a position he holds at this moment – that he is going home,” Karua said. 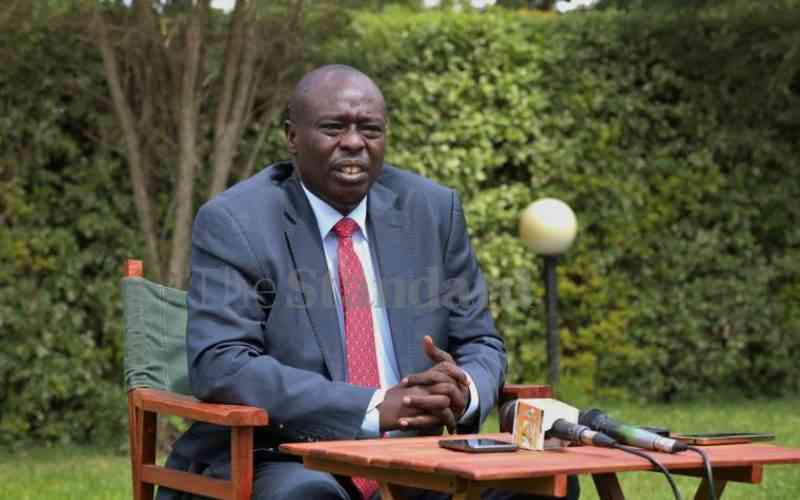 Premium Unbowed Gachagua sets sights on the prize
To Gachagua, Uhuru's failure to back his deputy was betrayal of a gentleman’s agreement that Ruto would succeed his boss after serving for 10 years.
Politics
By Ndungu Gachane
2 months ago
.

Ex-President Uhuru to skip Ethiopia-Tigray peace talks
Africa
By Patrick Vidija and Mwangi Maina
10 mins ago
How well do you know the trending news stories this week?
Quizzes
By Clay Muganda and Reina Kimeu
40 mins ago
Premium First things you must do to save life when bitten by rabid dog
Livestock
By Dr Paul Kang’ethe
44 mins ago
Police, fans clash outside Argentine soccer match; 1 dead
Football
By Associated Press
1 hr ago
.

By Clay Muganda and Reina Kimeu 40 mins ago
How well do you know the trending news stories this week?