By Ndungu Gachane | 4mos ago

Should things go according to UDA's plan in the August 9 General Election, then Mathira MP Geoffrey Rigathi Gachagua will become the country's second most powerful man.

The fifth son of former Mau Mau freedom fighters from Hiriga village in Mathira constituency, Nyeri County, Gachagua served for more than 30 years as a civil servant, resigning in 2006 to concentrate on family business.

In later years, the political bug would come calling, thrusting him into the ring for the Mathira parliamentary seat in 2017. That journey that would five years later culminate in his being named UDA presidential candidate William Ruto's running mate.

The holder of a Bachelor of Arts (Political Science and Literature) degree from the University of Nairobi, Gachagua joined the provincial administration. Two years after his employment, he was recruited as a District Officer Cadet. A few years later, Gachagua became a personal assistant to Secretary to the Cabinet and Head of Civil Service Philip Mbithi at Harambee House, Nairobi.

As a provincial administrator, he underwent paramilitary training at the Administration Police Institute and an Advanced Public Administration Course at the Kenya School of Government.

Working under Prof Mbithi saw the youthful Gachagua earn the trust of senior government officials to an extent of writing speeches for the President that would then be proofread by Mbithi.

"Political power is good, I remember the pool of professors who worked for former President Daniel Moi," Gachagua said in a past interview with The Standard.

Gachagua would later be handed a transfer letter to the Provincial Administration when Mbithi was dropped but after pleading with Moi, he was deployed to Laikipia, Kakamega and Limuru.

Gachagua experience working in different areas and his understanding of the workings of government was perhaps one of the reasons considered by Ruto when picking him as his running mate.

But his naming as UDA presidential running mate has come with its share of challenges dredging up the past, which according to some of Gachagua's critics should have locked him out of the position.

There have been incidents during his tenure as a DO in Limuru, for instance when anti-riot police officers, at the height of the clamour for multi-partysim, stopped a Ford Asili delegation from touring Limuru led by former Butere MP Martin Shikuku and area MP George Nyanja.

Old files on where he served as District Officer in Molo have resurfaced, with videos of people claiming to be maimed during his tenure making the rounds.

But a bullish Gachagua denied ever working in Molo. "Let them go and peruse the notice boards bearing the officers who have ever worked in the Molo office. I have never worked there," Gachagua said.

In a past interview with Inooro TV, Gachagua defended whatever action he may have taken while he served as DO maintaining that "I was working under government and I was a Yes Sir man and I can't carry the blame. Even Uhuru Kenyatta and Mwai Kibaki worked under Moi but they did not carry the burden of any misdeed," he said.

Gachagua has remained unbowed and believes his toughness in the provincial administration prompted his secondment in 2002 to the then Kanu presidential candidate Uhuru Kenyatta as his PA until 2006 when he resigned to go into his business.

He points to his loyalty to those he works with and uses the 2002 election to justify his word. At a time when the opposition wave was sweeping across the country, he and his family went against the tide and supported Uhuru for President when Kibaki was also vying.

Kibaki would under the National Rainbow Coalition (NARC) succeed Moi when he beat Uhuru Kenyatta in the poll.

It is the same loyalty, he maintains, that propelled him to support Ruto and go against his one-time boss Kenyatta.

To Gachagua, Uhuru's failure to back his deputy was a betrayal of a gentleman’s agreement that Ruto would succeed his boss after serving for 10 years. And due to his firm stand and support for Ruto, Gachagua claims, he became a target of the State.

The first term Mathira MP is battling charges at the anti-corruption court with the Assets Recovery Agency seeking to recover up to Sh200m said to have been acquired under unclear circumstances.

His nomination as Ruto's running mate did not come easy amid reports that most Mt Kenya leaders had favoured Tharaka Nithi Senator Kithure Kindiki for the job.

Gachagua's remarks since his nomination have also brought him under criticism.

During the burial of his brother attended by the Deputy President, his remarks that if elected to Presidency, they would open the gate of Sagana State Lodge so that people can eat rice and slaughter 35 bulls were interpreted to mean he had no interests of the region at heart.

"I'm focused I'm not bothered by the cosmetic criticism and my remarks have always been received well," he says. 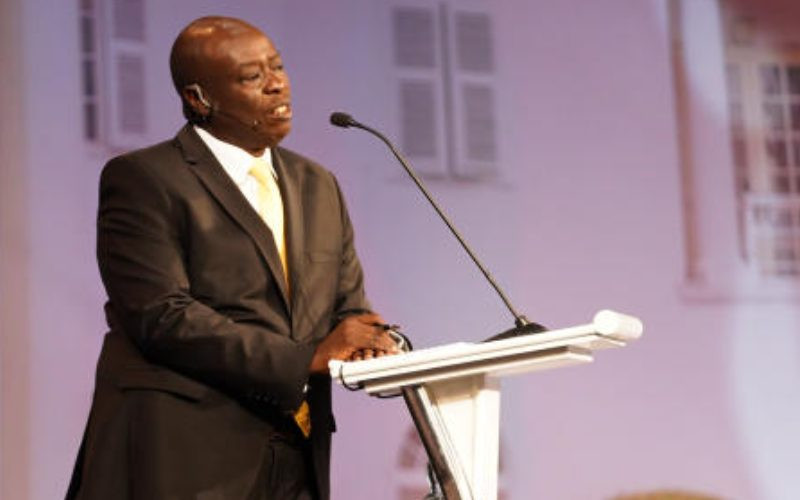 Mathira MP Rigathi Gachagua throws jabs at President
Gachagua’s offensive on the president was, seemingly, part of a strategy that the UDA has employed, which also involves piling the president’s burden on Azimio.
Politics
By Brian Otieno
4 months ago
.