By Jacob Ngetich and Edwin Nyarangi | 3mos ago

Deputy President William Ruto has promised to invest at least Sh500 billion in the financial years 2023-2027 in the agriculture sector and the small and medium enterprises.

Ruto said the money will be raised from budget reorganisation and restructuring so that the country can be more pre-production oriented, reduce huge infrastructural financing and create jobs.

During his manifesto launch at the Moi Sports Centre Kasarani, Nairobi, yesterday, Ruto said that the expenditure policies will also be reorganised to cut wastage and promote value for money. He promised the introduction of zero-based budgeting to ensure justification of all expenditure items in the budget.

He said this would insulate the Agriculture sector from low-value and State captured spending programmes, while the public-private partnerships will be accelerated to lessen the burden on the budget, especially in value addition and agro-processing.

“Agriculture is the largest sector of the economy, contributing half of Kenya’s GDP, a quarter directly and another quarter indirectly. Two-thirds of Kenyans derive all or part of their incomes from agriculture,’’ said Ruto.

The deputy president said agriculture remains the foundation of the economy and his government is committed to tackle all the challenges faced by farmers.

The manifesto talked of deployment of modern agricultural risk management instruments that ensure farming is profitable and income is predictable through a well-defined Guaranteed Minimum Returns (GMR) Scheme.

Ruto noted that the key challenges that will confront the new administration post-Covid-19 include an unemployment rate that is estimated at over 50 per cent and rising energy and food prices that are now beyond the reach of many Kenyans; and about half of Kenyans now living below the poverty line (2019 estimate) worsened by the pandemic.

The DP said the bottom-up economic model was a bold step in transforming the economy, to achieve durable growth and empowerment of the people at the bottom of the pyramid - the “hustlers.”

He explained that trickle-down economics does not work because the “free market” is not free, or fair, but it was rigged for the privileged, captured and monopolised by cartels and rewards capital more than labour, big business more than small ones, and incumbents more than start-ups.

"Trickle-down economic model has failed because personal interests override the public interest where selective interest in policy and legislation supersedes the common good and it is based on an assumption that the market is properly governed and regulated. But most often, the market is captured by cartels driving it to monopolistic and duopolistic tendencies," said Ruto.

He described the bottom-up economic model, as a process where citizen participation is at the core of policies, strategies, programmes and projects.

The DP noted that in a properly functioning environment, the market and supply forces are supposed to be working perfectly where the government is expected to be an even-handed referee and there is the equitable provision of public goods and deliberate promotion and efforts in some sectoral areas.

"Market failure that leads to monopolistic and duopolistic tendencies brings about unnecessary barriers such as over regulations, prohibitive levies and fees, and criminalization of some sectors through biased legislations – like counterfeits," he said.

Others in the same category he noted included 10 million informal sector workers, categorised by Kenya National Bureau of Statistics (KNBS) as “unlicensed”, including mama mbogas, boda boda riders, hawkers, mkokoteni pushers, and many others whose livelihoods are often criminalised, and 2.5 million subsistence farm households.

"These groups are being swelled by smallholder farmers and small business owners who are bearing the brunt of predation by cartels like coffee farmers and Nyamakima traders whose imported consignments were impounded and burned in the name of protecting the domestic industry.

He said that bottom-up economic dialogue in the 47 counties, exposed the sufferings of Kenyans as a result of the high cost of food, unemployment, especially among the youth and the high cost of health services.

Ruto noted that agriculture offers the quickest payback period for investments and increasing production only requires addressing the cost, quality and access of inputs (animal feeds, seeds, fertilizers, pesticides etc), and providing farmers with the working capital to buy an adequate supply of the inputs.

He explained that the high cost of living can only be resolved by raising agricultural productivity which will increase farmers' earnings per acre and an excess product in the market will lead to an immediate impact on the pricing to the consumer.

The DP said this would transform 2 million, poor farmers, from food-deficit to surplus producers through input finance and intensive agricultural extension support, with a target minimum productivity revenues per acre

"This will raise productivity of key-value food chains (maize 8 -15 bags/acre, dairy 2.5kg- 7.5kg per cow/day, beef carcass weight from 110kg - 150kg) and reduce dependence on basic food imports by 30 per cent through Government-supported programs in cereal, oil crops and the pulses," he pledged.

He also proposed to establish MSME Business Development Centre anchored to vocational training facilities in every ward, and industrial park and business incubation centres in every TVET institution.

Ruto noted that in the financial year 2022/23 - 2026/27 he will allocate Sh250 billion directly to support a revolving hustler fund and business development services for the registered SMEs.

"We will commit Sh50 billion a year to provide MSMEs with not only reliable access but also an affordable source of finance through Saccos, and other forms of aggregations," he said.

This he said had made more than 60 per cent of urban Kenyans live in slums and other low-quality housing without adequate sanitation, undermining their dignity and exposing them to health hazards.

"Kenya Kwanza housing commitment is to turn the housing deficit into an economic opportunity.  Next to agriculture, we see housing production as the sector that will create employment for over 100,000 young Kenyans that are graduating from TVETs every year directly in the construction sector," he said.

In the health sector, the DP promised to ensure accessibly and quality service delivery.

"The most recent assessment shows that our total health expenditure stands at Sh550 billion a year, financed by the government (63 per cent), households’ “out of pocket” (27 per cent), and the balance of 10 per cent through insurance schemes," he said.

He said through wide-ranging consultations with the public and key stakeholders, Kenya Kwanza had come up with recommendations that would see implementation of Afya Bora Mashinani - The Kenya Kwanza “Bottom-up” Approach to Health Services.

The DP assured that he was committed to a Universal Health Coverage (UHC) system based on three pillars of fully publicly financed primary healthcare, a universal seamless health insurance system, and national fund for chronic and catastrophic illness and injury costs not covered (or with very restrictive cover) by insurance.

Other critical areas of commitment in structuring a successful Afya Bora Mashinani he said will be a primary healthcare-based approach that will give priority to preventative and promotive services mashinani.

Kenya Kwanza government also promises to enhance health services through the establishment of level 6 hospitals in six new sites to ease the pressure on the existing facilities. These are Kakamega, Embu, Mombasa, Bomet, Garissa, and Machakos. Ruto pledged to work with counties to train sufficient community health workers and ensure regular monthly payments.

On the ICT & Creative economy, he pledged to increase and enhance broadband connectivity across the country through the construction of 100,000km of fiber optic connectivity network to accelerate the development of Konza Technopolis

The economic transformation of rural economy through digitization via investing in the digital economy by rolling out 100,000km of fibre to counties, villages, schools, and over 24,000 businesses and homes expected to speed up innovation and entrepreneurship.

Ruto promised to complete all roads under construction and prioritise the upgrading and maintenance of rural access roads and improvement of infrastructure in urban informal settlements.

He pledged to construct under the Public-Private-Partnership (PPP) the critical national and regional trunk roads including the Nairobi-Nakuru- Mau Summit, Malindi-Kilifi-Mombasa-Lunga Lunga and initiate the construction of the 700km target along the Isiolo-Kula, Mawe-Modogashe-Samatar-Wajir-Kutulo-Elwak-Ramu corridor under the Northern Kenya Transport Improvement Project (NETIP).

This he said will be made possible through the use of Sh200 billion in the current Medium Term Economic Fund, PPP, and secularization of the road levy.

Ruto pledged to meet the constitutional right to water by 2027 by completing ongoing water projects, but also shift focus from large dams to household/community water projects, with an emphasis on harvesting and recycling.

In the manufacturing sector, Ruto pledged to build leather industry clusters in Athi River, Narok, Isiolo and Wajir and secure linkages with and technical support from markets (Italy) and use TVETs and technical universities to build local capacity to tap into the potential Sh120 billion ($1b) industry and could create 100,000 jobs.

On education, Ruto promised to pay for in-service teacher training initiated by the government, bridge the current teacher shortage gap of 116,000 within two financial years, and introduce a Special Service Tariff for all learning institutions for basic utilities to facilitate lower prices for goods and services such as electricity and food.

He promised to review the current exam-based system of academic progression, which has excluded millions of learners based on basic education exit exams, by implementing alternative entry criteria.

They pledged to establish a National Skill & Funding Council that amalgamates Helb, TVET and University Funding Board and increase funding to bridge the current 45 per cent gap and have fully equipped TVETs in the remaining 52 constituencies within the first two years;

Ruto said his administration will increase funding to research and development institutions from the current 0.8 per cent to 2per cent of GDP in accordance with the Science and Technology Innovation and the bottom-up economic agenda.

He pledged to double funds allocated to the school feeding programme to raise the number of beneficiaries from two million to four million; and to provide conditional grants to county governments to raise the numbers to 8 million.

On the gender issue, Ruto promised provide financial and capacity-building support for women through the Hustler Fund for women-led co-operative societies, chamas, merry-go-rounds and table banking initiatives and protect them from predatory interest rates charged by unscrupulous money lenders.

He promised the realisation of the two-thirds gender rule in elective and appointive positions in the public sector, within 12 months following election including 50 per cent Cabinet positions for women and increase the number of personnel at gender desks at police stations as well as increase funding for the Anti-Female Genital Mutilation (FGM) Board and fully implement the Anti-FGM law.

The DP pledged to complete and consolidate the implementation of the Constitution, by strengthening constitutionalism, entrenching the rule of law, improving access to justice, and enhancing respect for human rights.

"The Kenya Kwanza Alliance commits to completing the full implementation of the Constitution of Kenya 2010 and to promote the United Nations Sustainable Development Goal number 16, on peace, justice and strong institutions," he said.

The DP pledged to end extra-judicial killings, and establish the Coroner General’s Office as per the National Coroner’s Service Act of 2017 and also stop the illegal Evictions and Demolitions of Property.

In the security sector, Ruto promises to review and consider the improvement of remuneration and terms of service for all officers. 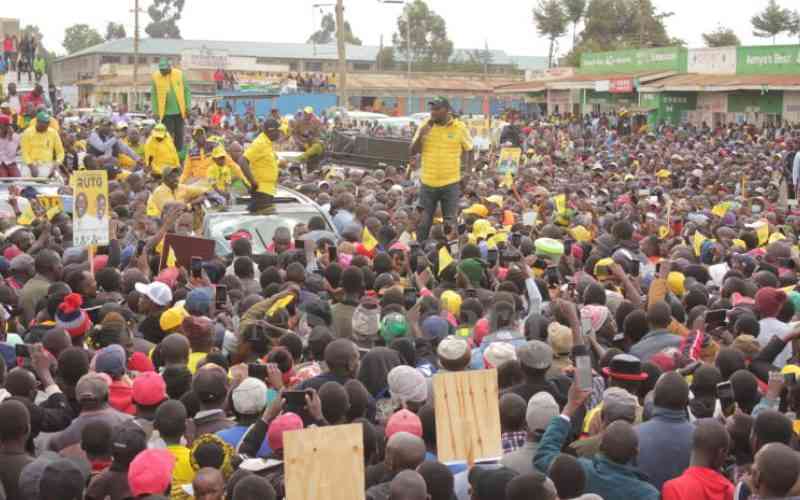 Ruto turns to his home turf in State House race
DP Ruto used both the national language and the local dialect to sink his political message to thousands of his UDA supporters .
Politics
By Mate Tongola
2 months ago 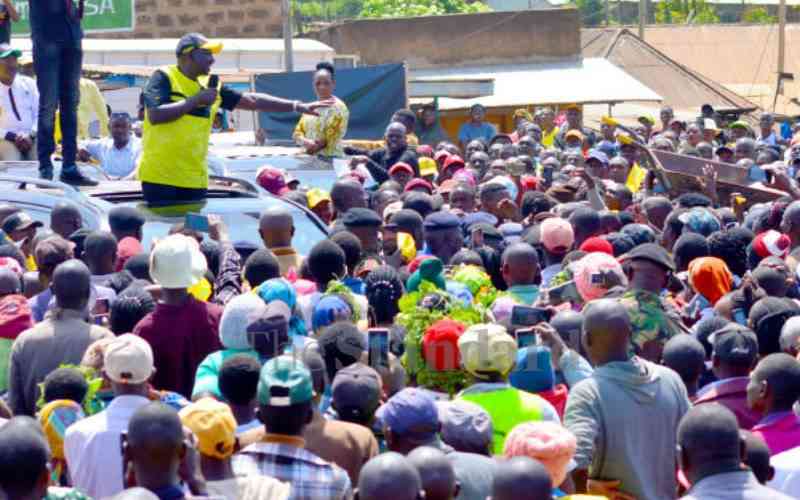 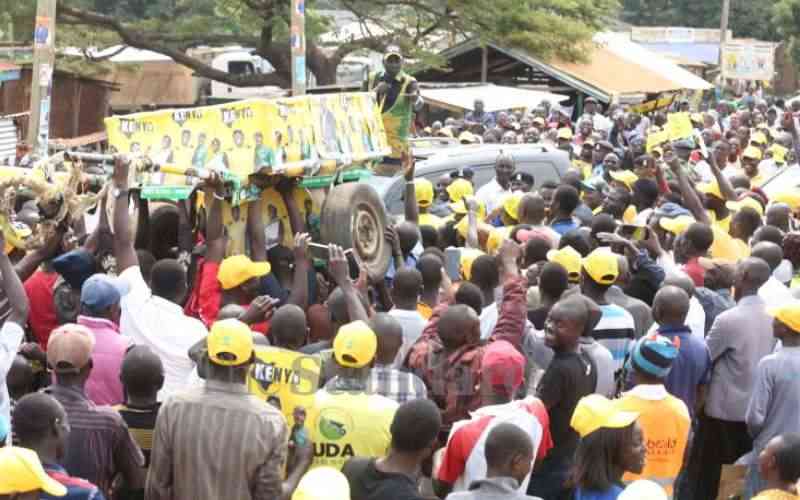