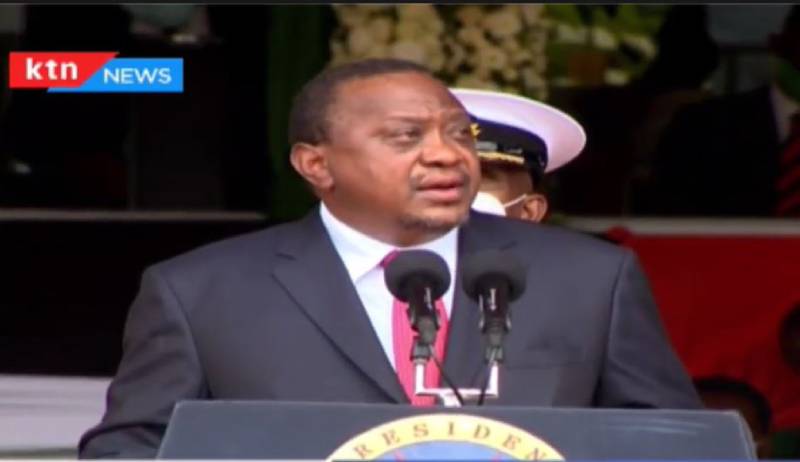 According to the Head of State, the Constitution was constructed to serve Kenyans but not to enslave them. Uhuru then elaborated that the law had not provided remedies to some of the issues affecting the country, especially during the election period. A case in point, he said, was the ‘winner-takes-it-all’ principle.

“Yes, the 2010 Constitution gave us some remedies but did it resolve or entrench the zero-sum game, in which the winner takes it all and the loser goes home with nothing. Are we still in the zero-sum constitutional dispensation that created conflict since the advent of multi-party politics in 1992?” he posed.

With this, the President said countrymen and women, should ponder about the remedies to the problems which he said cannot be realised through the electoral process but only through a constitutional process.

“It would, indeed, be a tragedy if, come subsequent elections, we will not have resolved this dilemma,” he said, adding, that we must not shy away from taking bold decisions the way our founding fathers did.

He trashed claims that there was a ploy to use the Building Bridges Initiative (BBI) to change laws and create positions for a certain group of leaders.

“…we should not give my suggestion the parochial interpretation of creating positions for individuals. I am only urging for a constitutional consensus that accommodates all communities in an election,” he said.

Uhuru urged the country to commit to thinking three benefits which he said could be realised through the constitutional amendments. They include political inclusion, equity in the distribution of opportunities, resources and the contestations, and violence that happens every electoral cycle.

His sentiments come at a time when the country has been thrown into a political mode in recent weeks; which has been attributed to the Building Bridges Initiative (BBI), and the dynasty versus hustler politics.

Raila Odinga, who has drummed support for the BBI said the BBI reggae was still on despite being derailed by the Covid-19 pandemic.

“We must change direction, we must look at our Country and see what we can do to move forward, BBI will help us do that,” he said.

Deputy President William Ruto on the other hand, said the country needs to have a robust conversation on the same, the sentiments were echoed by President Uhuru.

“The former Prime Minister has told us about reggae, which is fine. But I guess we will have robust national conservation that will bring everyone on board,” Ruto said.

The 57th Mashujaa Day celebrations went into high gear on Tuesday at Gusii Stadium amid tight security and disregard of Covid-19 protocols. No social distancing was observed and many could be seen with their face masks down below their noses or their chins.

The President hailed medical workers in the fight against the Covid-19 pandemic, some of which had passed on.

“In particular, I want to give a special mention to our departed health workers such as; Dr Doreen Lugaliki of Nairobi South Hospital, Clifford Mburia of Kitengela Medical Centre, Moses Ringera of the University of Nairobi Health Services and Marian Awuor of Rachuonyo Hospital, among others. Their memory will forever be engraved in our hearts. These brave souls paid the ultimate price,” he said.

The county was to host Madaraka Day celebrations at Gusii Stadium but this was cancelled over the coronavirus pandemic.

The celebrations were instead held at State House, Nairobi, with just a few people present.

Masks on as Kenyans attend Mashujaa Day in numbers.

Mudavadi: ICT ministry, CA have conspired to rig Raila in

Kuria seems to know what he says at rallies is controversial