Race to fill Uhuru shoes in Mt Kenya kicks off 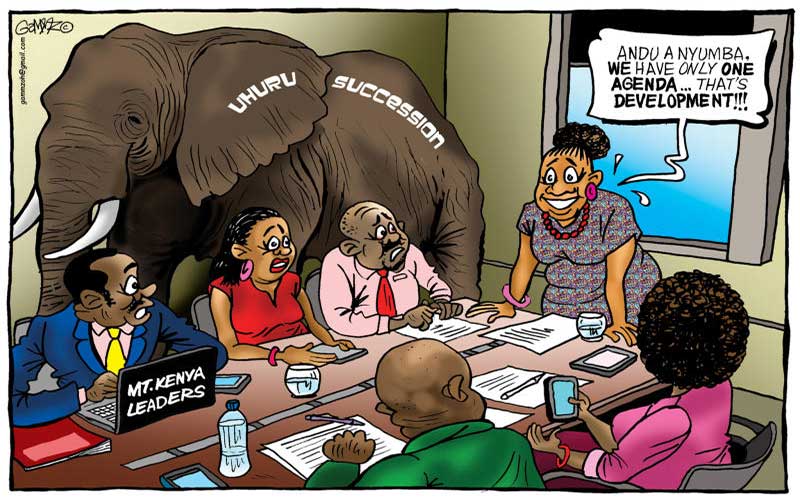 Key Mount Kenya leaders are positioning themselves to succeed President Uhuru Kenyatta as the region’s political kingpin with the head of State is set to retire in 2022.

The cast of hopefuls are reportedly strategising on how they will use the anticipated Building Bridges Initiative (BBI) referendum to build a rich profile.

Among those who have come out openly is former Gatanga MP Peter Kenneth who continues to meet region’s grassroots leaders mostly behind closed doors. Health CS Mutahi Kagwe is equally milking the privilege of his office to establish a foothold on the vote rich region and last weekend he represented Uhuru in the Akorino church annual meeting.

Kagwe has, of course, taken full advantage of the Covid-19 briefings to create a national posture.

His Agriculture and Livestock counterpart Peter Munya on the other hand has been making extensive visits in the area to champion what is at the heart of majority voters: tea industry reforms.

The lobbying has taken him to Murang’a, Kirinyaga and Nyeri where he has bagged support from the Democratic Party (DP) members.

Munya has also been combing his Meru backyard almost every weekend since the president sent the Cabinet on recess and has so far addressed rallies in Meru and neighbouring Tharaka Nithi.

There is also former CS Mwangi Kiunjuri who is believed to be keen to build liaisons in Murang’a and Kiambu counties.

Former Naivasha MP John Mututho who has been vocal on the the issues affecting the region and has been involved in unity talks among the Mt Kenya leaders is also seen as a potential Uhuru replacement, but it is Kenneth who is arguably most visible.

On Friday, he met elders and spiritual leaders of the Kikuyu community at their shrine near Narumoru Township in Nyeri. The elders said they only endorsed the former Assistant Minister as the Agikuyu cultural ambassador, but some observers read politics.

“Kenneth has won wide approval from national peers and his people of Mt Kenya have in the last few months clearly indicated he is far ahead of the competion,” said Linford Mutembei who chairs the Mt Kenya Youth Caucus. Mutembei said Kenneth’s main advantage over rivals was that he enjoyed confidence of national leaders such as the president, former Prime Minister Raila Odinga, Baringo Senator Gideon Moi and Amani Nation Congress leader Musalia Mudavadi.

But his critics argue that he may not be able to command the region support as he bears the tag of “spoiler” having stood against President Kenyatta in 2013. “I think Kenneth needs to work hard to change his political image altogether. He has always disappeared from the political scene only to re-emerge at the last minute,” said Geoffrey Wahome, a resident of Nyeri.

Vocal Nyeri MCA Kiruga Thuku, however, thought it was foolhardy for the region to purport to look for a kingpin yet Uhuru was still in charge.

“We should support President Uhuru until his last day in office then we can talk about his replacement. Anyone arrogating himself such a position may be shocked,” said Thuku. Few weeks ago, Kenneth was also endorsed by the Murang’a Council of Eminent Persons, the elders group that comprises of such figures as former Equity Bank chairman Peter Munga, Royal Media Services owner SK Macharia and chaired by real estate developer and Kenyatta 1 era Permanent Secretary Joe Kibe.

The council which was meeting at a hotel in Kiambu with all but three of Murang’a county’s nine MPs is said to have agreed to back his bid for a national position.

A virus that reverses deafness