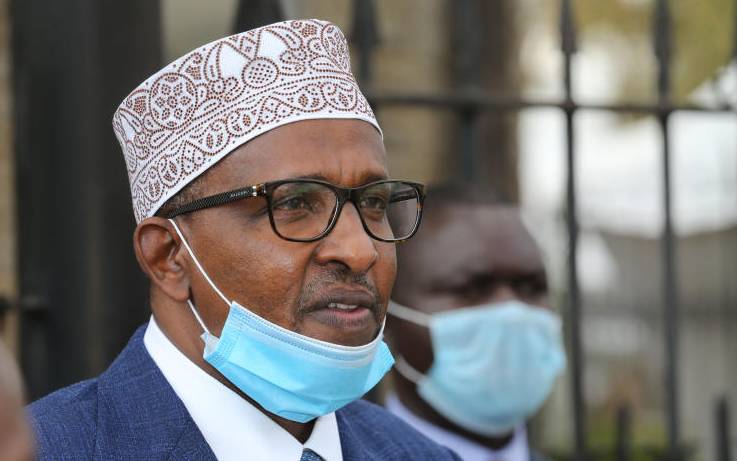 The removal of Garissa Township MP Aden Duale as Majority Leader this morning in a Jubilee Parliamentary Group chaired by President Uhuru Kenyatta on Monday morning at the Kenyatta Intercontinental Convention Centre was bound to create aftershocks and a slugfest.

Kimunya posted a thanksgiving note on  Twitter accepting the appointment while praising his predecessor’s track record.

But besides his delight were reactions and counter-reactions as Kenyans took to social media to express their views on the Jubilee purge. Under #AdenDuale and #AmosKimunya, friends and foes of the two politicians recalled their performances.

The most notable part of was the evoking of “Kimunya Must Go” parliamentary contribution by former Kakamega Senator Boni Khalwale.

Those opposed to the appointment of Mr Kimunya cited his past when he was faulted in the controversial sale of hotel Grand Regency while serving as Finance minister.

A user known as Char-lee Oddie posted: “With the ouster Aden Duale, it is official, the TNA wing of Jubilee is firmly in charge of Jubilee Party. Boni Khalwale where are you? Amos Kimunya is back as the Majority Leader!! Oscar Sudi, Moses Kuria be prepared!!”

This sentiment was shared by Kiharu MP Ndindi Nyoro who claimed that Kimunya failed the integrity required to serve in the position.

He posted “… But because it's the dynasties way or the highway, sasa Kimunya ni msafi kama pamba. The direction Uhuru & Raila are taking this country is very worrying. We're African & Africa is our Business!”

Eldas MP Adan Keynan, who replaced Kimunya as the Secretary of the Jubilee Parliamentary Group was also not spared as he was reminded of his past sins by activist Boniface Mwangi.

“Adan Keynan pushed for a bill that proposed; 1. Journalists deemed to have “scandalised” Parliament will be fined Sh500,000 or jailed for 2 years 2. A citizen, who protests against the actions of MPs & utters words that the MPs consider libellous, risks being fined and jailed,” Mwangi posted.

Duale’s friends and foes also aired their views on the ouster. Former Deputy Speaker Farah Maalim, Duale’s political rival, was one of the few leaders who congratulated Kimunya.

Mr Maalim dropped a subtle dig by claiming that the office had lost its efficacy during the 8 years Duale occupied it.

As for Ainabkoi MP William Chepkut, Duale’s ouster was good news which avenged the past tribulation he suffered under Duale’s leadership.

Chepkut: “Aden Duale with other Jubilee mandarins in 2017 during Jubilee primaries in Munyaka compromised my win and awarded the ticket to Chepkonga. Today he has been ousted as Majority leader, truly time is an equalizer!”

Duale was defended by Nandi Senator Samson Cheragei who claimed that the changes were malicious.

By Nicholas Mburu | 7 hours ago

By Benard Lusigi | 7 hours ago