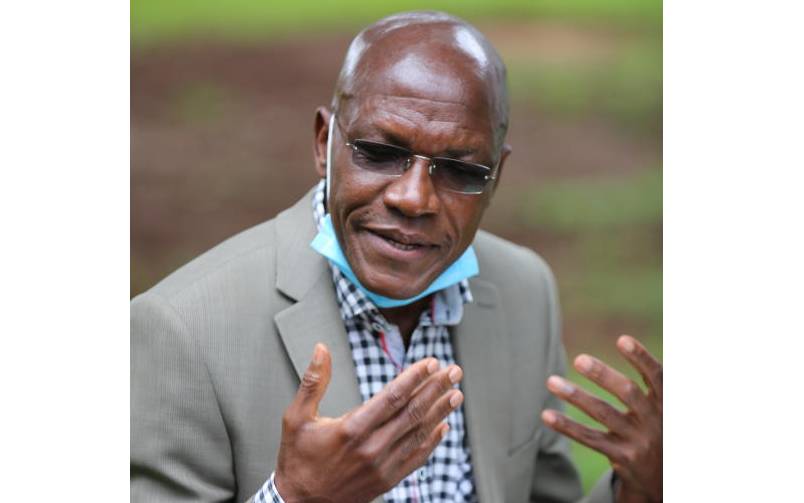 Former Kakamega Senator Boni Khalwale (pictured) was on Sunday forced to scamper for safety after police officers found him addressing a group of people despite an existing Covid-19 directive banning public gatherings.

Khalwale had organised a public meeting at Muranda Primary School in Shinyalu Sub County yesterday where he was criticising Governor Wycliffe Oparanya’s administration over its failure to cushion the electorate from hunger and starvation during the Covid-19 pandemic.

The former legislator was also accusing the Central Organisation of Trade Unions (Cotu) boss Francis Atwoli of being used by ODM leader Raila Odinga to scuttle the presidential ambitions of Musalia Mudavadi and the attempted ouster of Moses Wetang’ula as Ford Kenya party leader.

Police officers arrived at the school unexpectedly and Khalwale on sensing danger, vanished into a nearby maize plantation as the security officers chased after him.

The police officers did not spare journalists from different media houses who were covering the event by engaging them in running battles. They threatened to confiscate their cameras but remained firm and opted to disperse them with tear gas canisters.

“It’s a pity for Devolution Cabinet Secretary Eugene Wamalwa and Governor Oparanya to cheat us that they were bringing food to our people. They gave Shinyalu people facemasks instead of food,” said Khalwale in his earlier remarks.

According to Khalwale, it was unfair for Wamalwa and Oparanya to flag off the distribution of relief food at the Kakamega airstrip and then take it to Navakholo to flood victims.

“If the food was meant for Navakholo people, there was no need of flagging it at the airstrip; they would have gone there direct. You cannot give facemasks to people who are hungry and take food elsewhere,” said Khalwale.

Khalwale further castigated Cotu boss Mr Atwoli for holding a meeting with Luhya leaders at his home in Kajiado, saying it was aimed at creating divisions in the community for the benefits of his cronies in government.

“If it was a meeting for Luhya leaders, how come Mudavadi, Wetang’ula and I (Khalwale) were not invited? It is after the meeting that they attempt to dethrone Wetang’ula as the Ford Kenya party leader and hurling insults at Mudavadi began. Our community is not for auction again,” said Khalwale.

He dismissed Wamalwa and Oparanya as the community’s political kingpins and that Atwoli does not have authority to appoint leaders for the region, saying the two (Oparanya and Wamalwa) do not have the blessings of the Mulembe nation

On Thursday, Wamalwa and Oparanya flagged off food relief, which was for distribution to the over 4,000 flood victims who were displaced by flash floods after River Nzoia broke its banks.

Locals from Shinyalu Sub County gathered at the airstrip after word went around the food was for them but after it dawned to them that the food was food the flood victims, they started chanting anti-Oparanya-Wamalwa slogans.

This is despite being issued with facemasks and hand sanitisers.