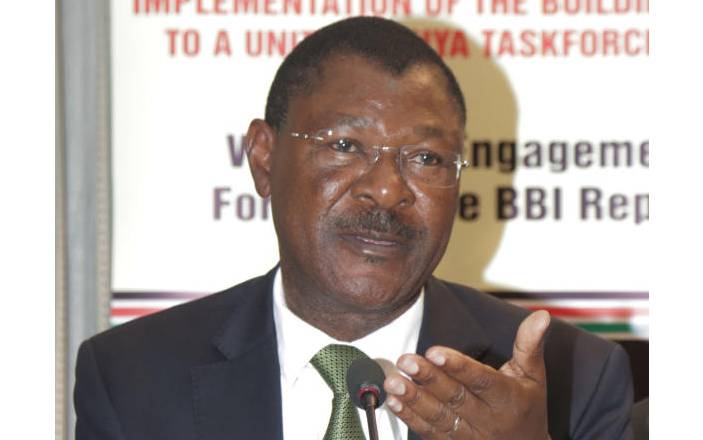 A fresh row is simmering within the National Super Alliance (NASA) over planned ejection of affiliate party members from parliamentary committee positions.

Ford-Kenya, one of the parties that form NASA, has vowed to challenge any decision to de-whip its members from House committees as announced by the National Assembly Minority Leader Junet Mohammed.

In an interview on Sulwe FM, a local Luhya vernacular Radio Station yesterday, Ford-Kenya party leader Moses Wetang’ula said the outfit would go to court should architects of the planned ouster of Kiminini MP Chris Wamalwa from the position of the Deputy Minority Leader execute their plan.

“It is not a privilege to be in a parliamentary committee leadership position. We have met as Ford-Kenya, Amani National Congress (ANC) and Wiper to deliberate on this matter, and we shall move to court if they make the changes,” said Wetang’ula.

The Bungoma Senator (above) took issue with the Orange Democratic Movement (ODM) which he claims to be behind the House ouster plot, accusing the Raila Odinga-led party of behaving as if it was “Alpha and Omega.”

Wetang’ula insisted that NASA’s agreement between affiliate parties remained binding even to ODM. “We cannot collapse NASA casually because there are assets and liabilities we ought to agree on. NASA cannot be killed until the end of its term, but accountability must be upheld,” he said.

He claimed ODM had refused to share part of the political parties’ cash it received with other coalition members. Wetang’ula hinted at the possibility of Ford-Kenya and ANC entering a new coalition in the run-up to 2022 polls, saying his party would not back Deputy President William Ruto.

“We cannot support Ruto, who is also interested in the top seat,” he said.

Spike in cases in Kibra and Langata linked to lack of social distancing and heavy use of public transport.

By Josphat Thiongo, Nairobi, and Jane Mugambi | 6 hours ago

By Patrick Beja and Willis Oketch | 6 hours ago