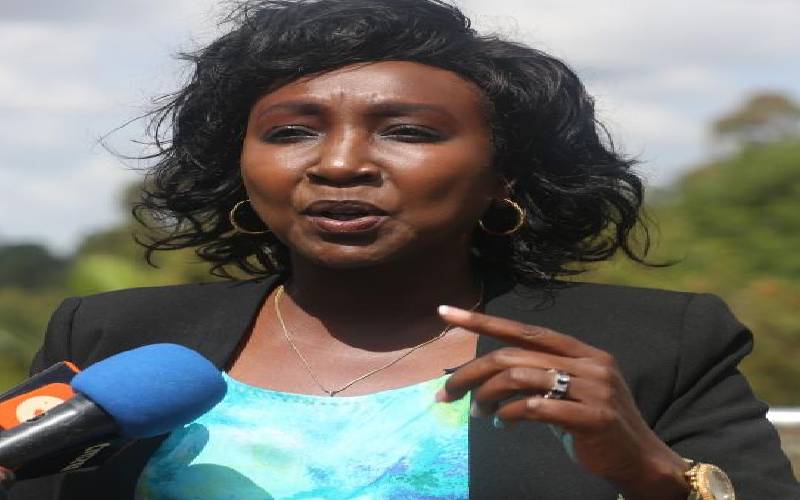 Uasin Gishu Woman Rep Gladys Shollei has hit out at President Uhuru Kenyatta for engineering a coup in the ruling Jubilee Party against his deputy William Ruto.

Shollei who spoke on Friday during an interview on Spice FM, said the fight against the DP has been engineered by his own boss for political reasons.

Shollei (pictured), a close ally of DP Ruto condemned the ongoing Jubilee purge targeting perceived DP Ruto allies, saying it has been orchestrated by those who are out to frustrate and elbow Ruto out of government.

She told Uhuru to know that he is not only fighting him (DP) but also his supporters, who are the people who made him the president.

“Let him know that when he fights the DP, he is fighting us on the ground, we the voters,” she said.

Shollei dared those who have declared war on the DP and his allies to bring it on saying they will not leave without a fight.

“They want to kick us out? Let them do it, but we will not leave the party without a fight,” said the County MP.

She said the process through which Elegeyo Marakwet Senator Kipchumba Murkomen and his Nakuru counterpart Susan Kihika were removed from the Senate Majority Leader and Majority Whip positions respectively and the planned ouster of Deputy Speaker Kithure Kindiki are illegal and will remain so even if they are effected.

“We know they are to take the positions, but we will not keep quiet, we will make sure the whole world knows that the purge was illegal,” she said.

The newly elected Majority Whip in the Senate Irungu Kangata tabled a motion to eject senate deputy speaker Kithure Kindiki over what he termed as disloyalty President Uhuru.

“The party has lost confidence in the Deputy Speaker hence the planned removal for skipping the State House PG meeting,” said Kangata.

Senate special sitting to vote on the Kindiki motion is slated for today at 2:30 pm.

Other Ruto allies who could face the knife as the Tangatanga and Kieleweke wings of Jubilee take on each other include Nandi Senator Samson Cherargey who chairs the Senate Legal Affairs committee, his Laikipia counterpart John Kinyua in charge of  Devolution and Mandera Senator Mohamed who heads the critical Finance Committee of the Senate.

Do not allow any visitors — Kagwe tells parents of newborns

I was misquoted on Nyanza presidency remarks – Junet Mohamed
;
Feedback