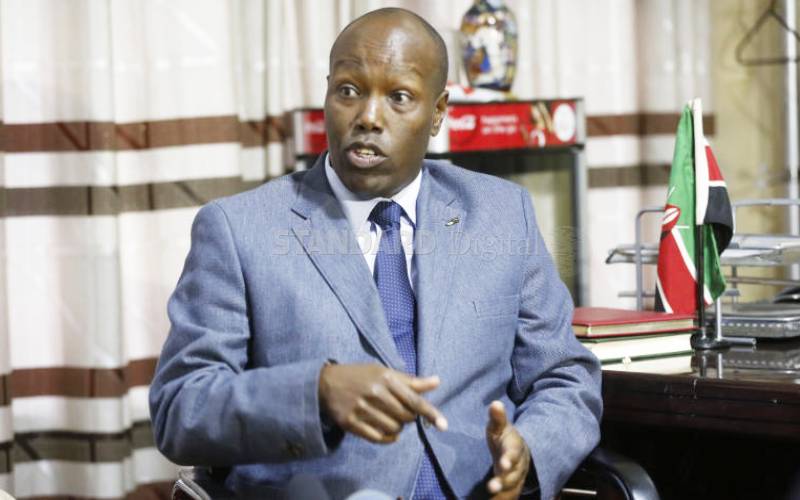 The Nakuru Building Bridges Initiative (BBI) rally has been postponed.
In a statement on Friday, Nakuru Governor Lee Kinyanjui (pictured) said the new date will be announced later.
"This decision has been made in consultation with Governors from the Rift Valley and the National BBI secretariat."
The move follows the report by the Ministry of Health of a confirmed COVID-19 case in the country and a directive issued by the Health CS and National Security Council on public gatherings.
Public institutions and commercial enterprises that serve high populations were ordered to set up preventive measures to avoid further spread.
"We also wish to call for caution in the management of information relating to the disease," Kinyanjui added.
He  said more effort must be invested in prevention and treatment preparations as opposed to mass panic and fear mongering.
Nakuru county government has put in place measures to handle any case of the disease, the governor said.
An isolation ward and trained medical personnel with full protective gear are on standby.
The county has two emergency numbers that the public can use in case of a suspected case. The numbers are 0724 320 853  and 0722 337 018.
Postponing the Nakuru BBI rally comes as some MPs in South Rift snubbed two consultative meetings on it.

The legislators, joined by some ward representatives, snubbed the meetings in Kericho and Bomet counties on Monday and Tuesday respectively.

The meeting attended by Governor Paul Chepkwony and his deputy Susan Kikwai went on despite the low turnout.

Meanwhile, Ford Kenya party leader Moses Wetang’ula called upon BBI Chairman Yusuf Haji and his team to put roadblocks to any politician trying to introduce retrogressive politics during the rallies.

He noted that it was saddening and disappointing to see BBI being turned into a contest of who can be the most eloquent orator in the public rallies instead of addressing the noble views that can improve the lives of wananchi.

"Kenyans do not want BBI to be a contest between who will be cheered more and clapped better than who in the rallies after attacking others but want the report that will help the country move forward’ he said.

The Ford Kenya leader urged Haji and his team to ensure that BBI is not used as an instrument of dividing Kenyans but maintain its purpose and goal of uniting Kenyans by building bridges to a united country.