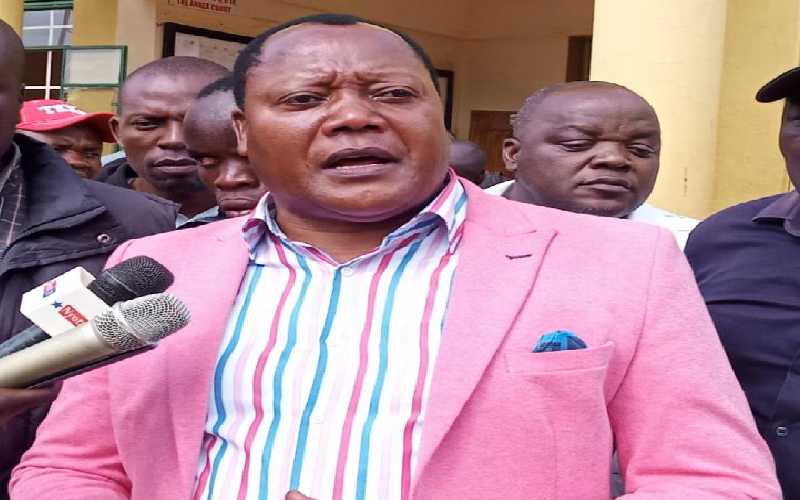 Speaking at Narok Stadium during the Building Bridges Initiative (BBI) rally, Wanjala claimed that gender issues will undermine the very democracy that Kenyans are yearning for.

“Even in marriages, people are not forced to live together running as county is not like running a marriage,” he said.

He urged Kenyans to protect and guard their freedom of choice saying in democracy, people are allowed to make their choices without being directed.

Wanjala said during a recent trip in Germany, on gender issues in the company of others were cautioned against forcing things down people’s throats without proper consultation

“We went on benchmarking on legislation affairs on gender issues and those whites told to be careful with issues like these,” he said.

Women leaders have backed the proposal to have a 50-50 representation in all positions both elective and appointive to cure gender imbalance.

This week, Kiambu Governor James Nyoro nominated Joyce Wanjiku Ngugi as his deputy in the spirit of BBI and handshake.

Bomet Governor Hilary Barchok is one of the governors who went against the expectation of many by picking County Speaker David Rotich as his deputy despite intense lobbying from women leaders led by Kitui Governor Charity Ngilu and her Kirinyaga counterpart Anne Waiguru.

During his swearing-in to take over from the late Governor Joyce Laboso, leaders including the Council of Governors had appealed to Dr Barchok to appoint a woman to the position in honour of the late Laboso.

The country has only two female governors Ngilu and Waiguru following the demise Laboso.

James Komen, a small scale livestock farmer, said he is worried his livestock may lack food.