Fake arms deal: Ruto says life in danger over breach of security in his office 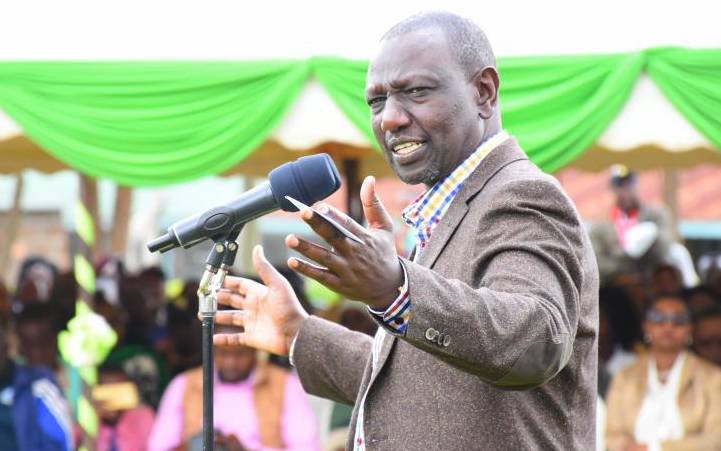 Deputy President William Ruto (pictured) has taken the fake arms deal war to Interior Cabinet Secretary Fred Matiang’i by demanding disclosure of immigration status of the two foreigners at the centre of the scandal.

Ruto wants investigations to establish the identity of the foreigners, their immigration status as well as their mission in the country and at his Harambee Annex office on February 13.

The DP also disowned his ally former Sports Cabinet Secretary Richard Echesa, who was arrested following the visit to Ruto’s office with the arms dealers. He told Inspector General of Police Hillary Mutyambai he considered the entry into his office a breach of security.

“This is a matter of grave concern to the security of the deputy president and other users of Harambee House Annex,” read a letter by the DP’s Chief of Staff Ken Osinde dated February 18 addressed to the police chief.

Osinde indicated he had been directed to write to the police chief by the DP.

A second letter dated February 19 to the IG said: “It is also critical that the investigations be extended to the immigration department to provide information on the type of visa issued to the alleged foreigners who were working with alleged criminals in our country.”

Yesterday, Matiang’i and Director of Immigration Services Alex Muteshi refused to comment on the matter, saying it is under active investigation.

The first letter refers to “a Mr Richard Echesa and some strangers” entry into the DP’s waiting room at Harambee Annex second floor where they purportedly signed a “contract” that is now subject of a court case.

The two arms dealers identified as Egyptian Mustafa Mamdough Amer Lofty and American Kozlowski Stanley Bruno complained that Echesa and his associated attempted to defraud them by purporting they could influence award of a Sh39 billion tender for supply of military hardware.

The DP wants the two arms dealers barred from leaving the country until the investigations are complete.

It also came as detectives from the Directorate of Criminal Investigations questioned six staff at the DP’s office yesterday over the incident. They included five police officers and a receptionist who were on duty.

They explained their role in ushering Echesa and his group into office. Officials of a company that received Sh11.5 million said to be consultancy fee for arranging the fake arms deal were also questioned and one detained.

In his letters, the DP seems to be suggesting the areas police should pursue in their investigations.

In his February 18 letter, Ruto said the investigations should establish how many people accessed the waiting room and which security officers facilitated the same.

According to him, an official statement is required to explain the foreigners presence in the country and particularly at his office on February 13.

“Foreign Affairs should facilitate information on these foreigners and the profile of the companies they purport to represent,” the letter stated.

“Who are the other Kenyan individuals with these foreigners and Mr Echesa and what is their criminal records,” it added.

The DP asked for forensic investigations on Eco advance Technology LLC, which was to supply the arms to the military and the representatives in Kenya and their nature of business they carry out.

In the second letter dated yesterday, Ruto told the IG that any officer in his (DP’s) office who will be found culpable should be charged as soon as possible. He told the IG to urgently take the necessary action and keep his office informed.

Police said they are in their second phase of the investigations targeting the office of the DP.

The officers investigating the incident also visited Jomo Kenyatta International Airport and a hotel in Karen where they obtained CCTV footage of meetings between the gun dealers and their hosts.

Police have also handed over to the Communications Authority of Kenya two walkie talkies for analysis that were recovered from Echesa’s car when he was arrested. The detectives also visited the Department of Defence Headquarters where the two dealers had claimed they visited last month.

The dealers had told police they visited DOD using the Lenana Road gate next to the Russian embassy in Nairobi.