Will Tanga Tanga be allowed access at Mombasa BBI rally?

He attended a delegate meeting at Wildwaters, Mombasa, on Friday ahead of the meeting at Mama Ngina grounds today.

On speculation that there may be political clashes between ODM and Tanga Tanga supporters, Chonga warned that there is no need for a few parties to feel that the BBI is against them.

"The BBI is a product of the Handshake meant to create unity," he said.

Chonga added that those linking the BBI to the 2022 General Election are only after their selfish interests.

As the intrigues went on in Mombasa, a section of Western leaders allied to Deputy President William Ruto held a rally at Nabongo grounds in Mumias.

The meeting started with the leaders making stopover at Nzoia Sugar Company where they assessed the factory before heading to Mumias Sugar Company for the same exercise.

The meeting (pictured below) was rescheduled after the police canceled the first attempt to hold it on January 18. 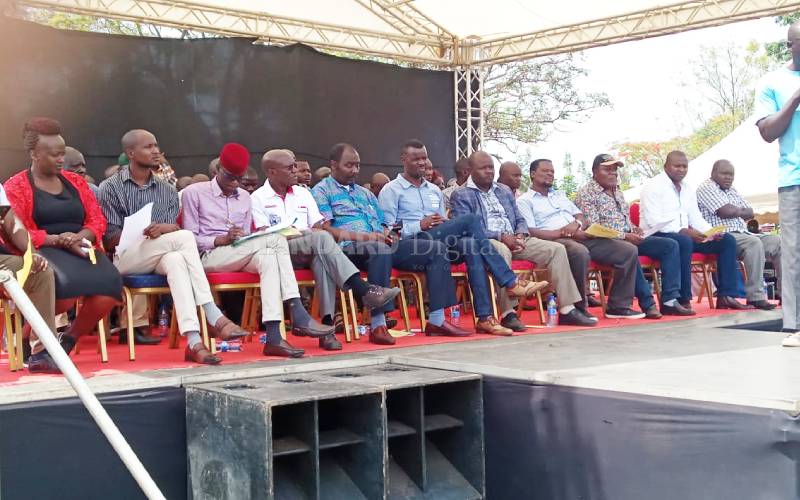 Rabai legislator Kamote Mwamkale agreed with Chonga, saying BBI is meant to uplift the lives of every Kenyan and regions, including the Coast.

"There can never be unity if other areas are left behind," he said.

Omar Mwinyi of Changamwe reiterated that the BBI whirlwind cannot be ignored and so the Tanga Tanga team is welcome to support the initiative.

Mvita MP Abdulswamad Shariff Nassir denied that there are plans to disrupt the Mama Ngina rally.

He said BBI is about inclusivity, therefore, even those who felt left out initially can join the bandwagon and drum up support for the initiative.

However, Saboti MP Caleb Amisi was not as open-minded as his counterparts.

He said before the Tanga Tanga team is allowed in, it should be made to apologise for accusing those supporting it of misleading the country.

"They should apologise for saying BBI is about ODM leader Raila Odinga ascending to power."

Amisi added that the Tanga Tanga team led by Deputy President William Ruto is free to host its own rallies.

The MP questioned why Tanga Tanga members would castigate the BBI then suddenly want to support it.

He says the team should be locked out to avoid chaos as their "intentions are not genuine".

Amisi criticised the faction's sudden interest in supporting the initiative, further adding that they want to make BBI what it is not.

Although they did not attend the Kisii and Kakamega rallies, they say they will attend future meetings.

"After consultations as leaders... we will participate and, where necessary, take charge of these public rallies...," Murkomen said.

The gold meeting series will be held in four continents - Africa, Asia, Europe and North America.

By Renson Mnyamwezi | 13 minutes ago

Why Raila, Ruto hardliners have rolled back their fiery tongues
;
Feedback