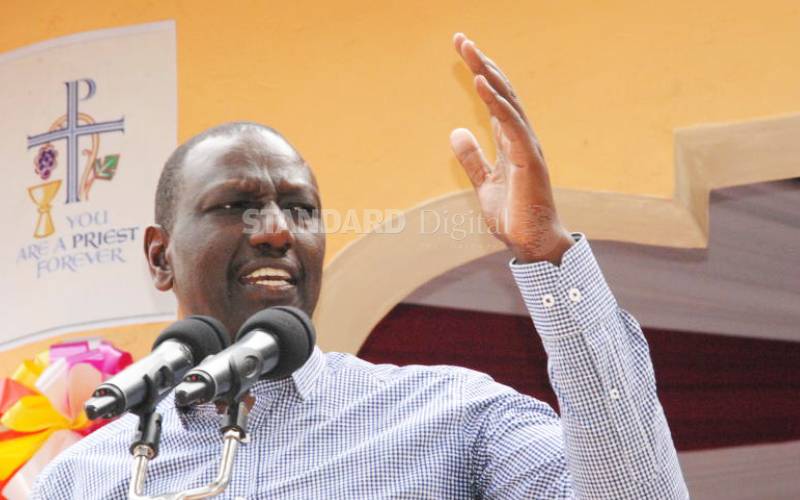 While it is obvious the UhuRuto union is tottering on the brink of total collapse, Deputy President William Ruto (pictured) has once again come out to term media reports of the rift as 'paid-for propaganda nonsense'.

In a tweet on Saturday morning, the once vibrant principal assistant to the head of state, who was always seen by the President’s side, played down questions raised on his apparent absence in nearly all presidential excursions these days.

The latest occurrence was on Thursday, when the DP was a no-show at State House, Mombasa, when President Uhuru Kenyatta met security chiefs.

Sources indicated Ruto was at the Coast but missed the meeting between Uhuru and 24 governors.

But in his tweet Ruto denied it, saying " I was in the office the whole day never in Mombasa."

Kenyans should ignore this choreographed, paid-for propaganda nonsense. I was in the office the whole day never in Mombasa. pic.twitter.com/YlP7KYBFmm

A week ago, Ruto was locked out of his official residence in Mombasa, which is just metres away from State House. This came days after he was denied clearance to fly straight to Mombasa from Botswana to meet the President.

The UhuRuto rift has sucked in Ruto's footsoldiers who are facing heat that range from being denied access to presidential functions to getting sacked or demoted.

In his latest Cabinet reshuffle, whose announcement was made in the absence of the DP, Uhuru sacked Agriculture CS Mwangi Kiunjuri who is considered a Ruto sympathiser.

Going by the challenges experienced in the docket during Kiunjuri's tenure, one would say his sacking was expected; however, being Ruto's strong supporter may have inked the pen.

On Tuesday, Tangatanga politicians were denied access to an Uhuru event in Nakuru, yet another perk of being pro-Ruto.

Kihika tweeted, "I am utterly shocked. Why would I be barred from a function being graced by my President at my home county?"

Despite these telling occurrences Ruto insists his road to the presidency in 2022 is clear.

The rift in Jubilee started widening after the March 9, 2018 Handshake, when Uhuru signed a deal with Opposition leader Raila Odinga.

Following the unity deal and the developing Jubilee cracks, new tendrils begun to sprout where politicians opposed to the bromance started running their campaigns under the euphemism tangatanga while those who support it called themselves Kieleweke.

It is unclear whether Ruto's woes are strengthening his political muscle or hurting his 2022 ambitions. What is clear though is that the DP's popularity in parts of the Mt Kenya region has been growing.

Reports also indicate that his plan for 2022 seems to be on course, the only thorn in his flesh may be calls for a referendum that have emanated from BBI, which he claims has been hijacked by ODM to craft its 2022 political line up.

Bring it on, President Uhuru challenged on Kisumu wife joke