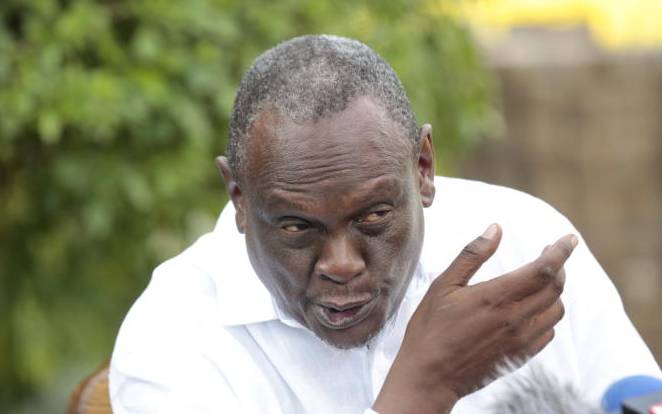 If envisaged constitutional reforms are implemented to create the post of prime minister ahead of the 2022 elections, Mr Murathe said there was nothing stopping Mr Kenyatta from taking up the position.

The premier post, he said, would be an available option if Uhuru remained Jubilee’s party leader, and the party secured a majority in Parliament after the polls.

Murathe told the rival Jubilee team allied to the DP that they could only stop Uhuru from becoming prime minister if they toppled him from the party leader position in the March polls.

The tough-talking Uhuru ally argued that if Jubilee retained a majority in Parliament after the 2022 elections and Uhuru was still party leader – with the assumption being that he would also be an MP by then – then he could become prime minister, going by the Building Bridges Initiative (BBI) proposals.

“I challenged them (DP’s camp) to declare if they will be challenging the president for the party leader’s position since nothing stops him from continuing as party leader,” said Murathe.

“Uhuru has not said that he wants to be PM, but nothing stops him from continuing to lead the party. And if the party wins and he is the party leader, then he can be (prime minister). Remember, the president will ask the leader of the party with the majority to form the government.”

Murathe has in the past made sensational remarks touching on the president and has not been reprimanded for it. In January last year, he launched a blistering attack on Dr Ruto, alleging that he was not suitable to succeed Uhuru.

He then announced his resignation as Jubilee vice-chairperson, saying he could not sit in the same National Executive Council with someone he was determined to block from ascending to the presidency.

And in the lead up to the 2017 presidential election, Murathe made a case for Uhuru’s re-election, saying Kenyans would see a ruthless side to the president in the second term that would see him wage a vigorous war on corruption.

Yesterday, Murathe dared those opposed to the idea of the president becoming prime minister to campaign against the BBI proposals.

“There will be those who will support the proposals and those against. The people will decide in a referendum. They can campaign against the BBI proposals. If they win, they will have their way. That’s what democracy is all about,” he said.

Murathe made the remarks in response to Ruto’s recent claims that Uhuru was being pushed by “political cartels and con men” to cling to power after completing his two terms in 2022.

On Tuesday in Nyeri, the DP said Jubilee had no plans to change the Constitution to remove the two-term limit for the president, an apparent response to Murathe and Central Organisation of Trade Unions (Cotu) boss Francis Atwoli who have insisted Uhuru would still be in power after 2022.

“For clarity, the party has no scheme or plan to change the Constitution with the intent to take Kenya back to the dark days, to have leadership concentrated in one corner of this country,” Ruto said.

But Murathe yesterday questioned why Ruto and his allies were uncomfortable with Uhuru serving in the capacity of prime minister.

He argued it would be discriminatory to block Uhuru but allow Ruto to run for the presidency.

“If the deputy president, who has served two terms in the presidency, is eligible to run for president, why can’t the president run for prime minister in the new political dispensation? Why would the law discriminate against one and not the other?” Murathe asked.

Ruto has, however, avoided a direct confrontation with the president and speaks glowingly about his boss.

Even in his remarks in Mathira on Tuesday, he stressed that Uhuru was a democrat who would not want his image tainted by selfish changes to the Constitution to extend his hold on power.

Yesterday, MPs allied to the deputy president dismissed Murathe as a “non-entity” who should not purport to speak for the president and the ruling party.

MPs Alice Wahome (Kandara), Didmus Barasa (Kimilili), John Waluke (Sirisia) and Cornelly Serem (Aldai) instead told Uhuru to come out and pronounce himself on the claims that he plans to cling to power.

The war of words comes on the backdrop of a looming face-off pitting MPs allied to Uhuru against those in Ruto’s camp in the battle to take charge of Jubilee ahead of its anticipated March party polls.

The DP’s allies have vowed to take control of the ruling party by electing officials loyal to Ruto and kicking out the current interim team, which they accuse of working against his bid for State House.

But Murathe claimed that Ruto and his team cannot be trusted to unite the country as proposed under the BBI.

“I also believe that the agenda for uniting the country, inclusion and guaranteed prosperity cannot be left in the hands of some of these pretenders to the throne,” he charged.

Yesterday, Ms Wahome, who triggered heated political exchange after describing Uhuru as a “threat to democracy” last week, said Murathe was not a member of the ruling party and should desist from speaking on its behalf.

“If he (Uhuru) wants to become prime minister, let him come out and say it. When someone who does not hold any party position talks on behalf of the president then it points to a problem somewhere,” he said.

The Aldai MP added that they have no problem with the idea as long as Uhuru calls for a Parliamentary Group (PG) meeting and shares his plans with Jubilee members.

Mr Baraza agreed, saying: “If he wants the position, let him convene a PG and ask for our support and we will make that decision based on merit. Even if he wants to continue as the party leader, he will have to compete against others interested in the seat.”