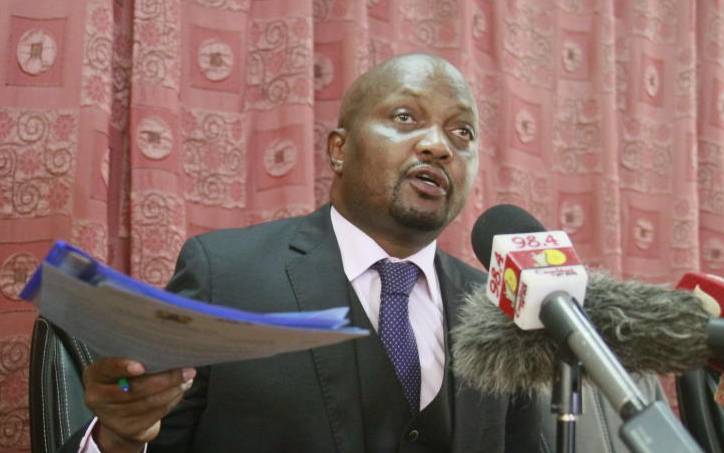 The push and pull between political factions pushing for a referendum and those against it on the implementation of the BBI report escalated into possible friction between Members of Parliament and the National Assembly Speaker Justin Muturi. This has been made public after Gatundu South Member of Parliament Moses Kuria (pictured) lashed at Speaker Muturi for declaring his support for a referendum instead of a parliamentary process to implement the proposals in the report. Kuria even issued a threat of beginning a process to kick out Mr Muturi.

“Why Justin Muturi would allow himself to be bribed with a tilapia meal by John Mbadi in Migori to rule out a parliamentary route for BBI is a mystery for me. Today I will start collecting signatures to impeach him,” he posted on his social media page on Monday. Mr Muturi, while addressing residents of Uriri Constituency on Sunday ruled out a possibility of settling on a parliamentary process to implement the report citing lack of proper mechanism to table the report. The Speaker had accompanied some MPs to Uriri for a fundraiser. Among those who attended the event included Minority Leader of the National Assembly John Mbadi, Migori Senator Ochillo Ayacko, Senator Okong’o Omogeni, Mark Nyamita (Uriri), Tim Wanyonyi (Westlands), and Maisori Kitayama (Kuria East). The route to implementation of the Building Bridges Initiative report has split politicians into two groups. A section of Jubilee leaders, Kieleweke, and ODM leaders have come out in support of the referendum arguing that the people must be involved in the implementation of the report.

Those angling for a referendum vote argue that Parliament may end up doctoring the document until it loses meaning. "Parliament is likely to move many amendments and change the proposed laws several times that we may not finally recognise what was in the original document," said former Tigania East MP Mathew Adams Karauri. While addressing a gathering at Ojijo Oteko Secondary School in Karachuonyo on Saturday, Mbadi also alleged that Parliament was too divided to implement the report. “Our Parliament is divided into MPs allied to Kieleweke and Tangatanga factions and this will lead to mishandling of the BBI report,” said Mbadi who was accompanied by Lake Basin Development Authority Chairman Odoyo Owidi. Tangatanga, a group allied to Deputy President William Ruto, on the other hand, has maintained that the parliamentary process is enough to roll-out the implementation of the recommendations of the report.

SEE ALSO: Bill seeks to give local firms the edge in State contracts

For instance, yesterday, a group of Tangatanga legislators drawn from the Central region camped at Lari Constituency where they re-iterated their support for the parliamentary process. The MPs vowed to oppose any push for a referendum on grounds that it would polarise the country through early campaigns and drain taxpayers ’money. They included Rigathi Gachagua (Mathira), Alice Wahome (Kandara), Kimani Ichung'wa (Kikuyu), Kwenya Thuku (Kinangop), Jonah Mburu (Lari) and Jude Njomo (Kiambu). The report released to the public by President Uhuru Kenyatta on November 26, 2019, at the Bomas of Kenya. The BBI report proposes to change the current executive structure. Such include the re-introduction of the prime minister post, the leader of the official opposition, minister of state and cabinet ministers among many more.