Tragedy for Kenya as MPs turn to Executive lapdogs 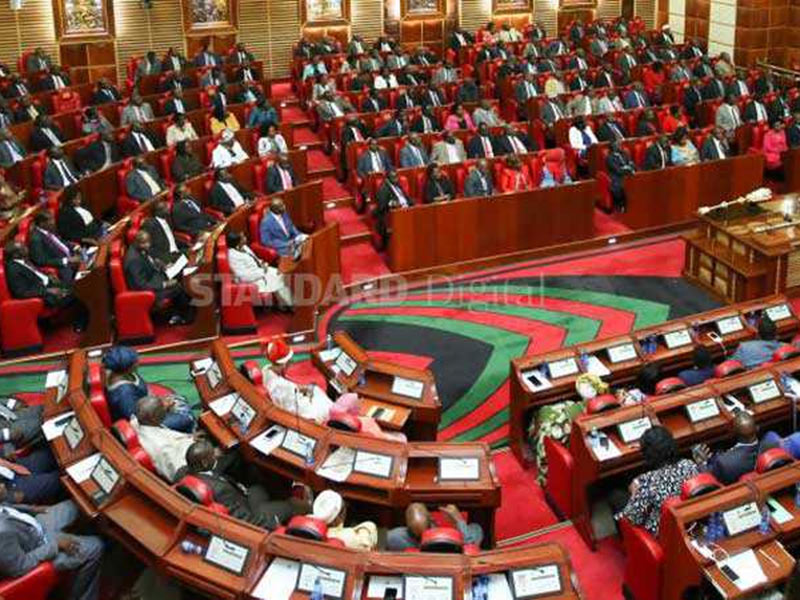 The removal of the cap on lending rates by MPs this week is the latest indicator of how much the 12th Parliament has progressively abdicated its role of protecting public interests to let the Executive have its way.

On Tuesday, MPs absented themselves from the House during voting on the proposal by President Uhuru Kenyatta, only to turn around and claim they had not been given adequate time to lobby. In an afternoon session characterised by shouting, the House failed to raise at least 233 MPs required to overturn the President's decision, with only 161 legislators present when the Division bell rang for the House to take a vote.

As a result of the development, Kenyans face the likelihood of expensive loans.

It was just the latest in a series of instances where the House has let the President have his way, effectively turning Parliament into cheerleaders for the Executive.

In September last year, MPs failed to overturn a memorandum proposing an 8 per cent fuel levy fee, after the House failed to raise a quorum. This has seen Kenyans pay more for fuel products.

In July, MPs allowed a proposal by the President to have the Kenya National Shipping Line (KNSL) and a Swiss firm jointly run the second container terminal in Mombasa.

Article 115 of the Constitution allows the President to refer a Bill back to Parliament for reconsideration. To overturn a presidential memorandum requires 233 MPs, which is two-thirds of the 349 members. It is these numbers that MPs have consistently failed to raise when voting on such memoranda.

The trend of MPs mysteriously disappearing during voting was laid bare yesterday after Speaker Justin Muturi confirmed that 270 members logged into the chamber, but during voting on the interest rate caps, only 161 were present. Some of those who were not in the House to vote later turned up to lead a walkout during yesterday's morning session, forcing the Speaker to chastise them for their hypocrisy.

“If members come here and walk out, it is wrong. It is dishonest. Some of those even complaining were not seen in the chamber. If you think that you make your laws in television stations, you can only blame yourselves,” said Mr Muturi.

The Speaker has in the past protested the “technical appearance” by legislators, who only sign in so the record indicates they were present so they earn the sitting allowance, but later sneak out of the chambers even when key debates and votes are lined up.

In April, Speaker Justin Muturi cautioned MPs against getting cosy with 'witnesses' during committee sittings with Cabinet secretaries. Some Cabinet secretaries and governors get away with lecturing the MPs without a word from the chair.

At the time, Muturi protested against MPs attending meetings as “friends of the committee” to show solidarity with their cronies being investigated.

“Don’t be a friend of the committee merely because a person from your village is appearing,” he said.

National Assembly Majority Leader Aden Duale added: “There is common misconduct of members hugging and having hearty engagements with witnesses before and after sessions. The seriousness of the matters being discussed in committees must be seen in the manner that members treat and engage the witnesses.”

It even got the attention of Minority Leader John Mbadi, who told colleagues that when they get into committees, they are supposed to safeguard the interests of the House, not “rent-seeking”.

“State officers must conduct themselves in a manner that avoids conflict of interest or demeans their offices,” said Mr Mbadi.

Muturi yet again faulted the MPs following Tuesday's failure to marshall the needed 233 members to vote on the President's memorandum on loan interest rates. He accused the MPs of frustrating House business for two sittings, protesting the President’s veto powers, saying the records showed they had numbers to defeat the Head of State's proposals.

During the vote on the 8 per cent fuel levy, MPs failed to raise the numbers. On the morning of the vote, MPs were reported to have been lobbied by Uhuru and ODM leader Raila Odinga to support the rise. To ensure the matter went through on a technicality, they absconded the vote, denying the House the requisite numbers to overturn the memorandum. Some could be seen chatting in the lobby, while others were taking tea at the MPs' cafeteria.

During the vote on the shipping line takeover, the same scenario was replicated as MPs ignored protests from their Coast region counterparts that the takeover would result in the collapse of Mombasa port’s Terminal One and loss of revenue for the Kenya Ports Authority. The proposal for the takeover had been introduced by the Executive through the Statute Law (Miscellaneous Amendment) Bill, 2019.

MPs have also been in the spotlight over their role in rubber-stamping presidential nominees to key positions in Cabinet and constitutional commissions, even where the public has sent memorandum contesting the suitability of nominees.

Kiambu MP Jude Njomo whose proposal to cap interest rates was repealed, and his Mvita counterpart Abdulswamad Shariff Nassir, who led the opposition to the shipping line takeover, blamed individual MPs for not turning up in the House to vote when it mattered most.

“The law allows the President to ‘usurp’ the role of Parliament. It is upon every member to be in the House during voting. It is inexplicable how MPs failed to turn up to vote,” said Mr Nassir.

According to Elgeyo Marakwet East MP Kangogo Bowen, the problem lies in the fact that the leadership of House committees "was appointed by State House" and that Parliament has bent to the whims of the country’s political and commercial forces.

“Parliament has no independence. It has become an extension of the Executive. The problem is we have chairs and vice-chairs that were selected from State House. They are under firm instructions to support anything that comes from the house on the hill,” said Mr Bowen.

“What Parliament transacts is not the common man’s interests but those of the big men. We have become Uhuru’s playground,” said the MP.

Minority leader Mbadi also said although the President is allowed in law to return Bills to Parliament, it is the frequency with which he has been doing it that is worrying. He said such presidential veto should be exercised with caution. He, however, said individual MPs have a responsibility to turn up in the House to vote.

“The presidential veto is not unique to Kenya. However, the veto needs to be exercised with caution. It should not be the order of the day. There is too much of the presidential memorandum. Instead of highlighting a few issues, his memos have been too detailed. He needs to exercise caution,” said Mbadi.

“If this continues, it has the potential of progressively usurping the role of Parliament because getting two-thirds majority is not an easy thing.”

“Kenyans are getting worried with the extent to which the Executive is interfering with Parliament. Presidential memorandums should be used sparingly."

The Standard has learnt of a Bill in the pipeline to put the burden of raising the two-thirds majority on the President. This will cure a situation where MPs are required to raise the numbers to overturn the Executive memorandum.

It's happening and we are there: An action-by-action account of the Kibra by-election as it unfolds

By Ndung’u Gachane and Jane Mugambi | 1 day ago