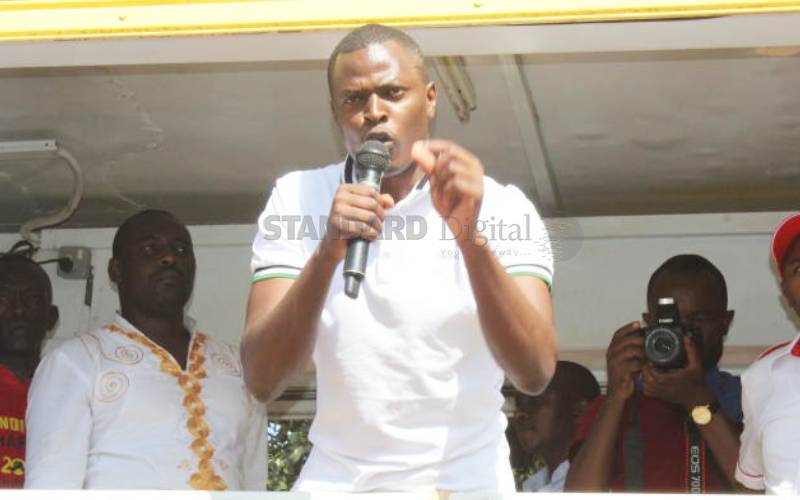 He went to RMS's Inooro TV for a show that was to end at 9pm.

A few minutes to midnight, he is said to have sneaked out.

The Kiharu lawmaker was accused of assaulting a police officer and resisting arrest.

They said they will spend the night at RMS and in the morning accompany Nyoro to any police station he will be summoned to.

The service at the Catholic church in Murang'a was disrupted after the two clashed over protocol.

The two legislators traded accusations as they differed over who should invite the present leaders to address the congregation.

The exchange was a replay of the supremacy battle between the Kieleweke and Tangatanga political factions.

Mr Kamanda had been asked to introduce parliamentarians and other invited leaders. But Mr Nyoro, who arrived later accompanied by his supporters, insisted that politicians from Nairobi would not be allowed to preside over a function in his constituency.

Officers from Murang'a police station intervened to calm the situation that almost turned physical, as the leaders and their supporters faced off.

Father John Kibuuru, who was presiding over the service, condemned the incident.

Mike Sonko: "The habit of jobless youth being used to create chaos during elections needs to stop"

Drama as Murkomen is heckled at BBI Report is released

Central Kenya hard it by violent politics in Church

The upgrade, as detailed in a circular dated September 13, 2012, came with an improvement in the salaries of all staff.

Raila receives defectors from Mandera, promises to work with them
;
Feedback