Reports suggest Raila Odinga is emerging as the favourite presidential candidate for the Opposition alliance, with Kalonzo Musyoka as his running mate.

Multiple sources told The Standard yesterday that the National Super Alliance (NASA) Co-ordinating Committee (NCC) had voted 8-3 for a Raila-Kalonzo ticket, retaining the pair who unsuccessfully ran against Uhuru Kenyatta and William Ruto in 2013.

Mr Wetang’ula, the Ford-Kenya boss and Senate minority leader, has been earmarked for the key position of National Assembly Speaker.

The committee has had a two-month marathon culminating in a final report whose contents are expected to be shared with the four NASA principals.

The committee’s decision made on Tuesday night was informed by proposals from a team of experts tasked with conducting a Strengths, Weaknesses, Opportunities and Threats (SWOT) analysis of the four principals before settling on the most suitable candidate.

“This was an agreed position. All of us agreed with what we were given and there is no fear that one of the parties will disown what we have come up with,” said a source within the co-ordinating committee.

The committee’s recommendation, however, is not final as the report will be submitted to the four principals, who will make the ultimate call.

It is not yet clear when the NASA line-up will be made public, but according to credible reports, it could be as early as the weekend.

However, there is a possibility the four principals could go on a retreat to create a common ground before announcing the final decision to the party’s rank and file.

But it is unclear at what point or what informed the reported proposal given that earlier sources within the technical committee had suggested that the team had settled on a Mudavadi-Kalonzo ticket.

The team, according to a draft seen by The Standard, had said a Mudavadi-Kalonzo ticket was formidable, but only if Raila backed one of them and rallied his supporters to vote for him.

According to the draft titled ‘Crunching Numbers 2017 and Finding a Relevant NASA Candidate’, the technical committee had drawn up five scenarios in which Raila wins as Mudavadi emerges number two.

The Standard confirmed that Mr Nyenze did not attend the final meeting at which the decision to crown Raila was reached.

“We are not sure if he absconded the meeting or he had other commitments. We wanted him to raise his objections but he did not turn up, so we assume he is in agreement with our decision,” said another source.

Using the latest mass voter registration figures, the team projected that NASA could bank on 8.2 million votes to Jubilee’s 7.9 million, but cited the margin of 257,197 votes as too low.

The team identified nine counties as swing areas with a total of 3.7 million votes.

Other considerations were specific dominant party perception, recent ‘likely to win’ perceptions on NASA leaders and impact of recent defections.

He should also be able to turn counties into NASA strongholds and not arouse strong incentives to steal the vote.

Kalonzo at number three would increase turn-out in seven counties: Makueni, Machakos, Kilifi, Taita Taveta, Kwale, Kitui and Mombasa. He was projected to get 3,074,322 of the total votes.

Wetang’ula was projected to have seven counties, namely Vihiga, Kakamega, Busia, Bungoma, Trans Nzoia, Mombasa and Turkana. He will get 3,047,100 votes.

On who will depress votes by 40 per cent, Raila led in seven counties, followed by Mudavadi in nine, Kalonzo in 12 and Wetang’ula in 15.

In scenario three, Raila was tipped to infiltrate nine Jubilee counties and get 40 per cent; Kericho, Bomet, Meru, Tharaka Nithi, Nakuru, Uasin Gishu, Laikipia, Isiolo and West Pokot were cited as areas he could secure 3,525,438 votes.

Raila, the team felt, can also turn Jubilee strongholds into battlegrounds and get 50 per cent and win in swing counties by 60 per cent.

He is followed by Mudavadi and Kalonzo. Wetang’ula’s contribution in the above two scenarios is unknown. 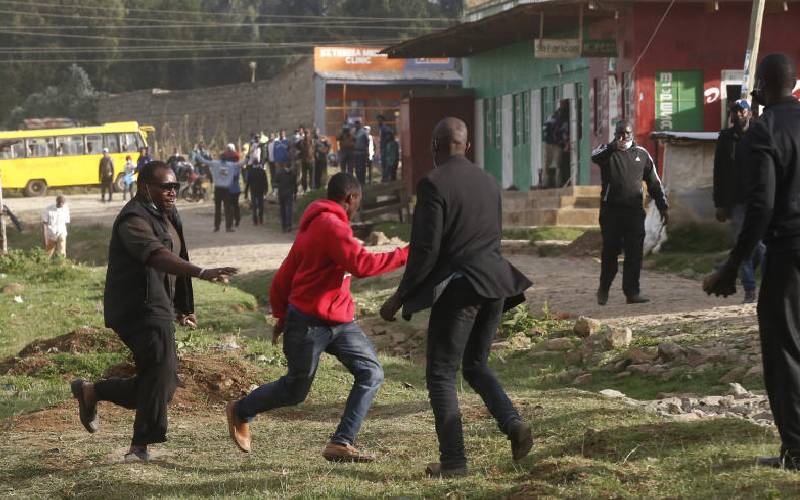 By Patrick Vidija | 16 hours ago