Signs that President William Ruto will be brutally efficient

By Kipruto Steve David | 4mos ago

George RR Martin’s writes in his novel 'A Song of Ice and Fire': "When you play the game of thrones, you win or you die. There is no middle ground".

President William Ruto can harshly be described in political sense as a cut-throat. The president's ruthlessness was displayed in the penultimate week to the elections.

In a series of political rallies in Nandi Hills Constituency, Kesses Constituency, Moiben Constituency and Baringo County, Dr Ruto called for the ouster of the renegade legislators. The aftermath saw Alfred Keter of Nandi Hills, Mishra Kiprop of Kesses, Silas Tirop of Moiben and Gideon Moi of Baringo decimated.

Dr Ruto could not leave the Mois alone. As the nation was being treated to the now famous ‘hot air’ spectacle at the Supreme Court, Ruto sent the then deputy president-elect Rigathi Gachagua, Baringo Senator-elect William Cheptumo and an entourage of the just-elected UDA legislators to a bloody hunt and onslaught of another of the Moi sons-Raymond Kipruto Moi- in Rongai Constituency. Raymond was eaten alive by UDA’s Paul Chebaror alias ‘Mamba’.

No sooner had the sword passed than the axe fell. At the inauguration dais, DP Rigathi Gachagua assumed his tough campaign tone. He narrated to the world the mistreatment and embarrassment that his family went through at the hands of state agents, ostensibly under orders of the Interior CS. Safe to say he has not forgotten and would not forgive.

Likewise, the president issued three far-reaching executive orders effectively countermanding his predecessor’s. These were appointment of six Court of Appeal judges, reverting port operations to Mombasa and appointing the Inspector General as the Chief Accounting Officer of the National Police Service. The decision by the president to disband subsidy programmes has been viewed as a tactical economical arsenal against Uhuru’s business associates.

Political pundits are foreshadowing a political purge akin to what Democrats are doing to Donald Trump and his close allies. Recently, New York Attorney General Leticia James filed civil fraud lawsuit against the former US president. On August 8, FBI executed a search warrant at Mar-a-Lago, the residence of  Trump in Palm Beach, Florida where classified documents were recovered.

The other day in a televised interview with Sean Hannity aired by Fox, Trump termed the investigations as Democratic Party’s politically instigated purge and witch-hunt meant to derail his 2024 “Save America” presidential bid.

Will Ruto let bygones be bygones or will he initiate a methodological purge within the confines of law and be as ruthless as President Joe Biden and Democratic Party?

To answer this, majority of pundits have observed that Uhuru’s continued role as the Chairman of the Azimio One Coalition Governing Council will put him in direct rebellion risking Ruto’s axe. Like his American counterpart, Trump’s decision to run again in 2024 has made him a target of the Democratic establishment.

A quieter retirement would signify surrender. However, the president has built a reputation of enemy total destruction.

If the Democrats’ purge on Republicans is anything to go by, Uhuru and his close allies must watch their back and prepare for legal battle. As George RR Martin’s writes in the novel A Game of Thrones, winter (troubled times) is coming!

-Mr Kipruto is an advocate of the High Court of Kenya. [email protected] 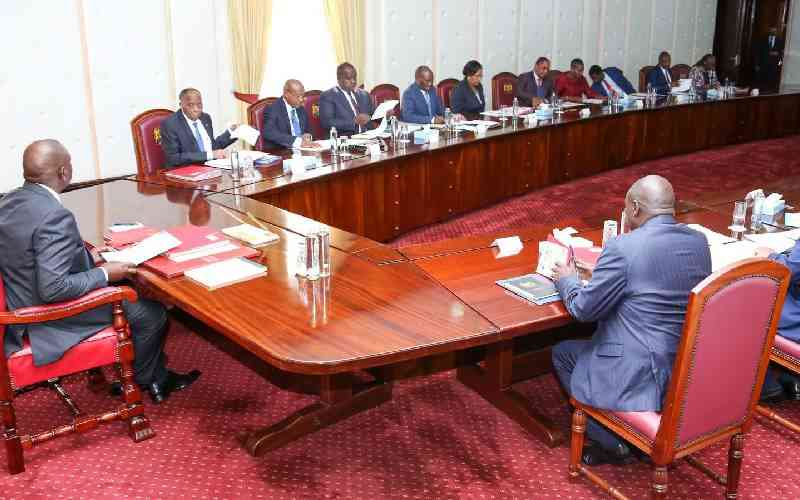 Premium Inside Ruto's last meeting with the Uhuru Cabinet at State House
National
By Jacob Ng’etich
4 months ago
.