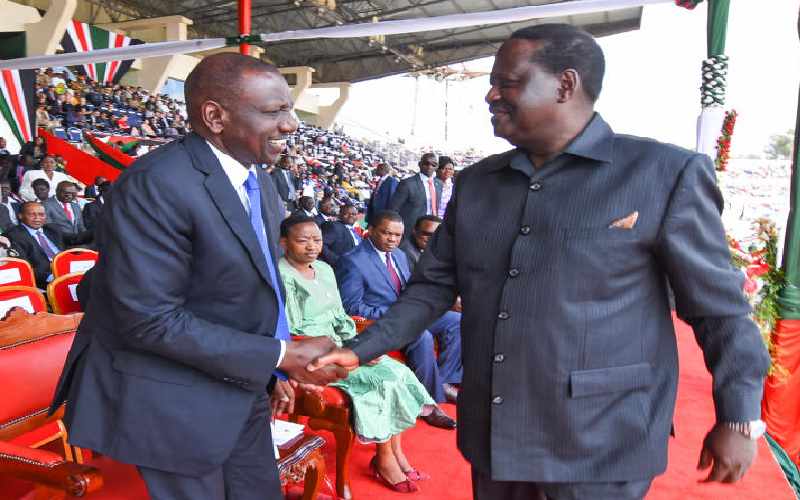 In the social sciences, framing comprises a set of concepts and theoretical perspectives on how individuals, groups and societies organise, construct, and communicate about reality. In other words, people build a series of mental filters through biological and cultural influences. They then use these filters to make sense of the world. The choices they then make are influenced by their creation and/or adoption of a frame.

Frames select some aspects of a perceived reality and make them more salient in such a way as to promote a particular problem definition, causal interpretation, moral evaluation, and/or treatment recommendation for the item described. But, just how strong is the impact of framing? Recent studies show that in some contexts it might have an even stronger effect on our reasoning than our own political views.

For quite a while now, a running theme of public commentary on Kenyan politics has been to fret over its persistent and escalating partisanship. Yet despite Kenyans’ reputation for friendliness and their professed fondness for compromise and moderation, the reality of Kenyan politics can often make you wonder if Carl von Clausewitz had it wrong when he called war “the continuation of politics by other means.”

Turn on your TV news, read the dailies, click on a news website’s comment thread, or bring up a political issue on social media and you are liable to feel that, in truth, it is the other way round.

In positioning himself for the 2022 presidential election, Deputy President William Ruto has escalated the partisanship bar a notch higher. He has symbolically elected to frame his presidential bid as one between ‘hustlers’ and ‘dynasties’ – between struggling Kenyans of low birth and the alliance of wealthy families that has monopolised political competition in Kenya for two generations.

In so doing, Dr Ruto seeks to portray himself as the purveyor of justice and the champion of the poor and downtrodden, much to the chagrin of President Uhuru Kenyatta and former Prime Minister Raila Odinga and their acolytes.

Indeed, the 2022 presidential contest has taken on the attributes of an election with potentially devastating consequences for the loser. This leads to a number of questions: Is the deepening animosity between Hustlers and Dynasties or Kieleweke and Tangatanga based on genuine differences over policy and ideology or is it a form of tribal warfare rooted in an atavistic us-versus-them mentality?

Is Kenyan political conflict relatively content-free — emotionally motivated electoral competition — or is it primarily a war of ideas, a matter of feuding visions both of what Kenya is and what it should become?

Here I reach an interesting, if somewhat surreal, question. What if, to some significant extent, the increase in partisanship is not really about anything? The dispute over the nature and origins of partisanship is a major issue within contemporary academic political discourse, with enormous practical consequences.

The framing of the 2022 contest has so much inflamed passions that political polarisation in Kenya is at an all-time high, and the conflict has moved beyond disagreements about matters of policy. It is clear that members of different political divides hold strongly unfavourable views of their opponents. This is polarisation rooted in social identity, and it is growing. It is tapping into a powerful and dangerous current of anger and resentment of “us-vs-them”

The growing gulf across ethnic, demographic, regional and social lines, which have attended the hustler-dynasty narrative, have generated group identifications that have changed the way people think and feel about themselves and their opponents.

Even when they can agree on policy outcomes, they tend to view one another with distrust and to work for group victory over all else. We saw this play out in the revenue division as well as the two-third gender rule debates. The same narrative is at the centre of the Building Bridges Initiative as well as the current debate on rotational presidency suggested by the President and acquiesced to by Raila, not to mention the Nairobi City County gubernatorial elections or lack thereof.

This debate has both strategic and substantive consequences. If the different political persuasions are split mainly because of differences over policy, the chances of achieving a compromise and overcoming gridlock are higher than if the two sides believe that their values, their freedom, their right to express themselves, their very identity, are all at stake.

It is easier to bend on principle than to give up a piece of yourself. Group victory is a powerful prize and Kenyan partisans have increasingly seen that as more important than the practical matter of governing the nation.

Our partisan politicians today are prone to stereotype, prejudice, and emotional volatility. Rather than simply disagreeing over policy outcomes, they are increasingly blind to our commonalities, seeing each other only as two teams fighting for a trophy.

This blinkered approach can only lead us down the warpath. As we gear up to the 2022 electioneering, we must close the political divide because we know, to put our future first, we must put our differences aside. Stop the drums of war.

Dr Wanjawa teaches in the School of Humanities and Social Sciences, Pwani University