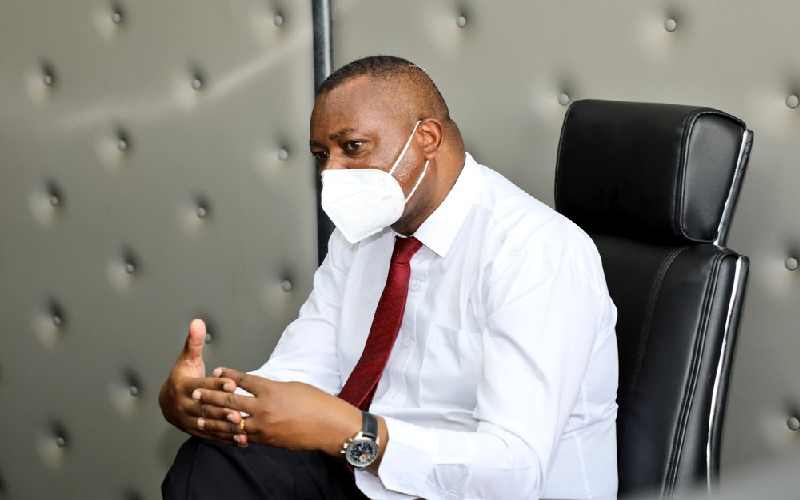 There are media reports of simmering inter-agency ‘wrangles’ between Director of Public Prosecutions (DPP) Noordin Haji and Directorate of Criminal Investigations (DCI) boss George Kinoti (pictured). Observers contend that unless the differences are resolved amicably and quickly, the fight against corruption may be stalled.

In reality, however, the inter-agency turbulence between the DPP and DCI, is nothing more than a gap in understanding of the functional distinctiveness between the two offices.

The DPP is an independent constitutional office holder with the power to direct the Inspector General of the National Police Service to investigate any allegation of criminal conduct.

Further, the NPS Act expressly mandates the DPP to direct the DCI to investigate any alleged offence. There is thus an established vertical relationship requiring the DCI to receive and execute directives issued by the DPP.

In terms of enforcement of penal laws, the DCI has an investigative mandate conferred to it by statute. It can initiate investigation and recommend prosecution.

That mandate is, by law, subject to the direction of the DPP. Section 35 of the NPS Act places the DCI under the direct control of the DPP in terms of receiving and executing directions of the DPP to investigate alleged offences.

In contradistinction, Article 157(6) of the Constitution is deliberate that the decision to charge is an exclusive mandate of the DPP. This is part of the constitutional design to safeguard the independence of the Office of the Director of Public Prosecutions from external influence or interference.

In terms of the fight against corruption, the law establishes a sophisticated and special legal regime with new institutions, over and above the procedures established in the Criminal Procedure Code Cap 75 Laws of Kenya. This is hardly surprising.

Corruption is a special offence under criminal law, requiring specialised anti-corruption institutions and greater inter-agency collaboration if the fight against corruption is to be effective and meaningful.

A robust, independent and functional anti-corruption framework comprising an anti-corruption agency clothed with fine statutory investigative powers, a distinct and separate prosecutorial office with the exclusive power to institute and undertake criminal proceedings, and a brave and bold specialised anti-corruption court to convict and punish corrupt officials is a sine qua non for the fight against corruption.

Article 79 of the Constitution ordains Ethics and Anti-Corruption Commission (EACC) as an independent anti-graft agency with special powers to investigate corruption and economic crimes. Section 35 of the Anti-Corruption and Economic Crimes Act (ACECA) requires EACC to prepare and forward the investigation report to the DPP for perusal and approval of decision to charge.

Under Article 157(10) of the Constitution, the decision to charge must be weighed against the evidential test, and the public interest test.

The DPP must be satisfied there is sufficient evidence to provide a realistic prospect of conviction, while also taking into consideration the greater public interest of mounting such prosecution. In 2016, the Chief Justice launched the specialised Anti-Corruption and Economic Crimes Division of the Judiciary to hear corruption cases.

A historical inquiry into Kenya’s anti-corruption laws and its institutions is traceable to the United Nations Convention Against Corruption (UNCAC) which ordained the creation of specialised institutions and agencies to combat corruption. Article 36 of UNCAC requires state parties to establish independent anti-corruption agencies fully funded and well equipped with the technical and legal expertise to conduct corruption related investigations.

The historical justification for a more robust response to combating corruption was the corrosive and destructive effects of the vice in societies.

Corruption undermines democracy and the rule of law, leads to violations of human rights and has the potential to undermine the security and stability of the nation.

The quest for a comprehensive response to the problem of corruption is what led to the creation of new and specialised agencies.

EACC is specially ordained by the constitution and mandated by ACECA to investigate corruption-related offences. In order to preserve the dichotomy of functions, ACECA requires EACC to forward the investigation report to the DPP for perusal and final approval of the decision to charge.

Looking at the constitutional and statutory arrangement of functions, it may be argued that it was a false start for the DPP to refer corruption-related investigations to the DCI, without requiring the DCI to collaborate with the EACC as anticipated by the law. But it is outright illegal and unconstitutional for the DCI to decide for itself to arrogate powers that the constitution and the law has assigned to the EACC.

Stick to its lane

This is nothing short of subverting the constitution and antagonising the DPP.

It cannot be argued that DCI does not understand that the scope of its mandate. Within the interpretive principle, verbis legis non est recedendum (without departure from the express words of the law), the textual reading of Article 157(6) is clear that power to institute and undertake criminal charges is the mandate of DPP.

The functional distinctiveness between the DCI and the DPP has now been settled by the High Court. Justice GV Odunga had an opportunity to make judicial pronouncement in Petition No.19 of 2020, Geoffrey Sang V Director Public Prosecutions and 4 Others [2020] eKLR concerning the mandate of the two offices.

Odunga, J, rejected the argument, as lacking in merit, that the DCI can initiate prosecution of corruption cases, and advised the DCI to “stick to its lane” and avoid the temptation to extend its mandate through craft and innovation.

In law, there is nothing like ‘power struggle’ between the DCI and DPP. The two offices do not run a marathon. Rather, it is a collaborative relay where the DCI and EACC initiate investigations with or without the direction of the DPP, compile a report and hand over to the DPP for independent review, and prosecution.

The DPP’s core business is mounting prosecutions in merited cases. It would turn logic on its head that the DPP should set out to sabotage its prosecutorial function in order to frustrate the investigative agencies.

In the end, the DCI and EACC would have to learn to build inter-agency comity, courtesy and mutuality with the DPP in order to boost the war on graft. Otherwise the momentum on the war on graft will be lost. Forever.

Mr Ogolla is a constitutional lawyer