Norway’s Jakob Ingebrigsten denied Kenya a gold medal in the 1,500m at the 2020 Tokyo Olympics Games on Saturday.
Listen to this article

1,500m world champion Timothy Cheruiyot’s bid to add an Olympic title to his world title was ended by Norway’s Jakob Ingebrigsten on Saturday at the Tokyo Olympics.

Cheruiyot later said he felt something in his hamstring and was going to see a doctor to know what the problem was.

“I gave my best, but felt something in my leg when I tried to push for the finish line,” Cheruiyot said.

He also said it was the Norwegian’s day considering that he had never lost to the youngster even in the Diamond League races.

Cheruiyot had taken the lead just after the gun with Ingebrigsten sitting in second place.

There was no change in the positions until the last 200m when the Norwegian put in the afterburners and the Kenyan could not respond and even had to hold on for the second position with Great Britain and Northern Ireland’s Josh Kerr closing in.

Kenya’s Abel Kipsang, who was making his debut at the Olympics in Tokyo finished in fourth place.

Ingebrigsten won the race with a new Olympics record clocking 3:28.32, to break the record that was set by Kenya’s Kipsang in the semi-finals. 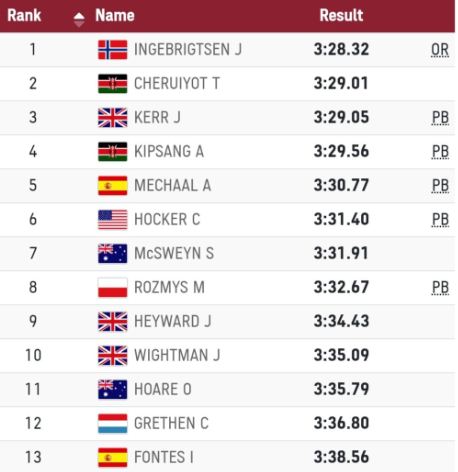 Cheruiyot clocked 3:29.01 for his silver medal while Kipsang ran a new Personal Best time in fourth place after crossing the line in 3:29.05.

Cheruiyot was however happy with the silver medal, saying it has been a long journey to the Olympics and despite many challenges, he faced before the games and was ready to fight another day.

He had earlier been left out of Kenya’s team to the Olympics after he finished fourth during the trials and meant he had to train alone before a late decision was made to include him in the team to Tokyo.

He was included in the team after Kamar Etyang, who finished third at the trials was axed after failing to meet anti-doping requirements ahead of the games.

“It has been tough and I was forced to train alone and even had to change my training base as my coach had already travelled to Tokyo with the other athletes.

“It was tough, especially after I felt the pain in after 1400m and I just decided to soldier on and I am happy with the silver medal that I won,” Cheruiyot said.

On his part Kipsang said it was a learning process in his first Olympics Games and was looking forward to more good shows in major global events.

By Robert Abong'o 1 day ago

By Odero Charles 2 days ago

By Stephen Rutto and Jonathan Komen 2 days ago

By Editorial 3 days ago

By Ernest Ndunda 3 days ago

By Washington Onyango 4 days ago

By Robert Abong'o 1 day ago

By Odero Charles 2 days ago

By Stephen Rutto and Jonathan Komen 2 days ago

By Editorial 3 days ago

By Ernest Ndunda 3 days ago

By Washington Onyango 4 days ago