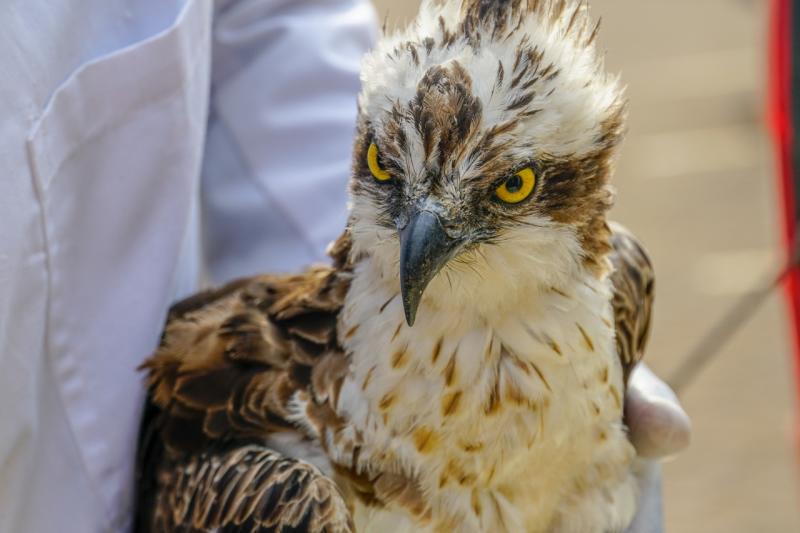 When a 72-year-old fisherman rowed back to the shore, haggard and weary after working in the long, cold night, he hoped and prayed that his nets would be full of fish.

But Walter Tende, a resident of Usalo village in Usenge, Siaya County, got an unusual catch – a rare migratory bird known as Osprey.

“I had gone to check my nets at around 10am when I found something strange,” he says.

Tende tells the Sunday Standard that the bird was totally exhausted and he picked it up with ease.

“It did not attempt to fly, as it would under normal circumstances. The bird, however, looked strange to me,” he says.

It had a metal ring on its leg, which made him suspect it was under some kind of research. He decided to call and inform the Kenya Wildlife Service (KWS) about it.

The bird had bruises on the legs following the long struggle to get out of the net. Its origin has been established from the ring on its leg that it was ringed in Finland.

The bird is said to have flown to Kenya from Finland, covering a distance of 6,948 kilometres.

Tende did not believe the bird came all the way from Finland.

“I have always thought all birds belonged to this country. It has never occurred to me there are foreign birds that come and go,” he says.

While bird migration is normal, the particular case of the Osprey, according to the KWS, is unique because the bird was recovered in an area not previously known as a migratory route.

Lake Victoria catchment area has however never been thought to be a potential site until the migrant Osprey bird, which breeds in Europe and migrates to Africa during winter, was found.

According to Patrick Omondi, the KWS Director of Research, the bird appeared healthy, though it had lost some weight, and was dehydrated.

“We delivered the bird to the KWS Veterinary Department. It will be stabilised by administering IV fluids and provided proper diet, then monitored for a few days before being released back to the wild,” Dr Omondi said.

The KWS Head of Veterinary Services, Dr David Ndeereh, said they will share the information with the East Africa Bird Ringing Association to obtain further details.

According to Bernard Amakobe, a researcher and expert bird ringer, ringing of birds is an important exercise that helps in detailing health of both the ecosystem and of the bird species.

Amakobe said birds can be ringed using metal rings, colourings, tags or transmitters that can be observed using binoculars or satellites.

“A bird that has been ringed can be observed using binoculars or transmitters to locate their habitats and even monitor their health basing on the environment they live in,” he said.

Amakobe added that birds are crucial indicators of the ecosystem and their disappearance means there is a challenge that needs to be addressed. “Birds are very sensitive to changes in the environment.”

By Harold Odhiambo | 22 hours ago