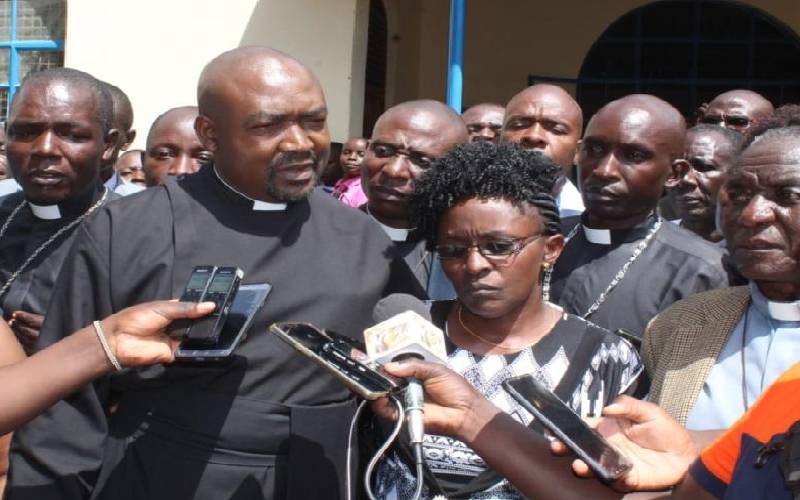 Wrangles at Maseno West Anglican Church of Kenya took an interesting turn after a section of faithful demanded the splitting of the diocese.

They want the new diocese to be known as Maseno Central.

Several faithful from Ramula and Regea deaneries yesterday presented a petition to Bishop John Godia (pictured) seeking to be allowed to form their own diocese.

They asked the bishop to constitute a special sitting of the diocesan synod to ratify their exodus.

In their petition, they argued that there was a "strong and general feeling" among Christians in Regea Archdeaconry that the leadership of Diocese of Maseno West as presently constituted may not foster unity.

"This factor will definitely play negatively upon faith and spiritual as well as physical and psychological well-being of Christians thus necessitating our desire to move out," read the petition.

The three, who spoke to the media, said their case grants them more sense of belonging than being part of the expansive Diocese of Maseno West.

Bishop Godia, however, said the congregants presented documents that had not been discussed in any deaconry committee, deanary and the church.

He said such matters must be discussed from the grassroot to the top church organs.

Bishop Godia added that he had given the Christians audience but asked them to follow the procedure of the church laws in seeking their move.

"I am hardly four months in office and I have made it known to them that their notification is not birthed out of goodwill but protest and it will be difficult to convince anyone otherwise," said Godia.

But Mr Wagude denied claims they were calling for a spilt because of the recent election of the bishop that had divided the church.

They further said that the Diocese of Maseno West has 56 parishes, meaning that if the presiding bishop was to dedicate one Sunday in a calendar year per parish, some would miss out on his visit.

According to the petitioners, the creation of ACK Diocese of Maseno Central with 22 parishes that form Regea Archdeaconry will enable Christian witness fellowship.

Mr Ochieng of Ulumba Parish argued that even Bondo Diocese had been created out of the initial diocese of Maseno West with approximately 60,000 Christians.

The Maseno West Anglican Diocese was rocked with wrangles after the election of Bishop Godia to replace retired Bishop Otieno Wasonga.

Bishop Wasonga retired in September 2019 after serving for over 29 years in the diocese.

By Eric Abuga and Stanley Ongwae | 19 hours ago