Ruto's march from a Kanu stalwart to the commander-in-chief

On April 15, 2002, The Standard, at the time titled East African Standard profiled now president-elect William Ruto, describing him as a "conservative" in a then quickly evolving political environment.

After initially agreeing to grant an interview, Ruto delayed it for three days and on a Sunday afternoon called the reporter to inform them he was outside the Town House newsroom ready for the interview.

Driving a black Mercedes Benz with no number plate which perhaps had just been imported, he quickly drove to Harambee house.

President Daniel arap Moi was exiting from power and Ruto was among those who had mellowed their way into his confidence.

Among Moi’s confidants were President Uhuru Kenyatta who was supposed to take charge of the team that included other background operatives, including Ruto.

To his advantage, as a senior Kanu leader from Rift Valley, he took control of almost all the region MPs elected on the Kanu ticket.

With a boisterous government side led by Raila Odinga in Parliament, the Kanu-led opposition became literally suffocated as it fought to remain relevant.

But as he swam in choppy waters, the fight for a review of the Constitution which had been delayed by the previous Kanu government was revived at a time when Raila was also grumbling over an MOU with former President Mwai Kibaki’s government.

An opportunity arose that Ruto grasped putting up building blocks from which yesterday, he was declared the president-elect of Kenya to succeed his former party chairman, Uhuru.

They both joined Raila in his Orange side to successfully campaign for the rejection of the Constitutional referendum in 2005 but later parted ways, with Uhuru joining Kanu in support of Kibaki's reelection bid in 2007.

That was perhaps Ruto’s biggest political statement when he now emerged as the Kalenjin spokesman, rallying regional kingpins and young politicians into Raila’s ODM.

Led by Ruto and former Cabinet Minister Henry Kosgey, who was perhaps the senior most Kalenjin leader in ODM, his Kanu side led the campaign against the draft.

One side was led by Uhuru and Ruto, while the other team from LDP was led by Raila, Prof George Saitoti and Kalonzo Musyoka.

It was during that campaign that Ruto endeared himself to the Kalenjin nation, creating a strong ODM wave in the region.

Shortly after, the Electoral Commission of Kenya (now IEBC) declared victory for the "No" side in 2005, Ruto was crowned a Kalenjin elder with thousands of supporters in attendance.

Today, as Ruto is poised to become president, some of his former peers among them Musa Sirma and Julius Sunkuli who fell along the way and were budding comrades in the new Kanu power arrangement after 2002 are back in Parliament.

Others like Musalia Mudavadi, who remained with Ruto in Moi’s government and later parted ways in 2007 before rejoining in 2021 will also be part of government.

Mudavadi, the ANC leader, was also in the Raila team that almost won the election in 2007 and is therefore another of the Kanu inner core group that will be in power.

“Raila Odinga and Musalia Mudavadi attended that highly publicised function at the Eldoret Sports Club grounds where he was dressed in a Sambut to make him an elder,” says political analyst Martin Andati.

Ruto, he says has carefully managed his way to the top because in 2007, he mobilised the elders to show he was the new kid on the block and also the de facto Kalenjin leader, usurping more senior leaders like former ministers Henry Kosgey and Nicholas Biwott.

When Uhuru Kenyatta announced in 2007 that Kanu would not field a presidential candidate, Ruto had already decamped to ODM.

He made sure the community had its stake in the party when Kosgey was appointed ODM chairman as he bid his time in high profile campaigns across the country with Raila.

“Ruto became very popular in Nyanza and other parts of the country that supported Raila but it appeared his target was to be Vice President,” says constitutional law scholar Stanislus Murunga.

And so in 2007 as a member of the pentagon that included Raila, Musalia, Najib Balala and Joe Nyagah, he declared his candidature for president on the ODM ticket.

He, however, lost the nomination when he came third behind Raila and Mudavadi. Ruto appeared satisfied with the exercise, perhaps with hopes that he would have become Vice President should Raila have won.

When the grand coalition government was formed in 2008, Raila appointed him the Minister for Agriculture, a position he grudgingly accepted.

He made it known to his people that although they had expected something bigger, this was better than what he had in the Kanu government  when he served as minister for barely three months.

On April 11, 2010, a day after Raila toured Ruto’s Eldoret North Constituency at the peak of their differences, Ruto declared that he was ready to face the Prime Minister in the 2013 elections.

“I am not afraid of anybody because he (Raila) is a man just like me. We will see each other at the ballot,” he said.

“Now that everybody knows that I am the leader of the ‘No’ campaign (on proposed Constitution) ...I will campaign against the draft even if it means going it alone,” said Ruto at the time.

Some analysts argued that he wanted to build his profile, but others said he still had an axe to grind with Raila while another group thought he just wanted to test his popularity. 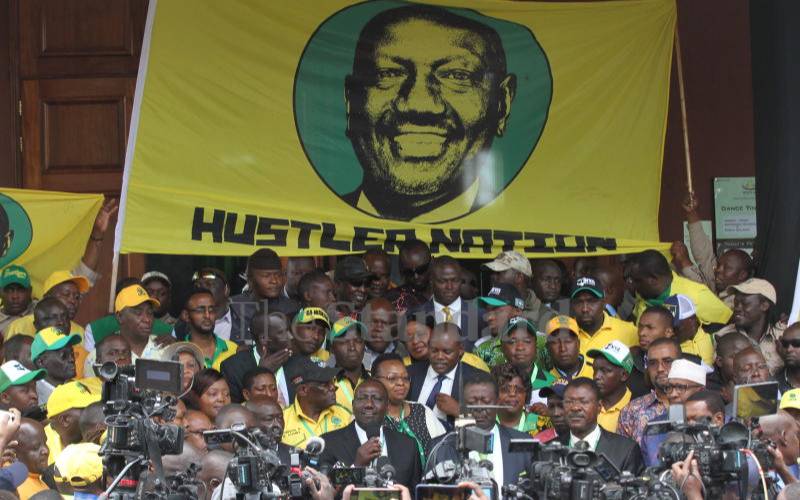 Premium Battle for State House begins in earnest as William Ruto cleared to run
William Ruto is the fourth candidate to get the electoral body’s nod to run for the top seat. He expressed confidence in IEBC but accused media houses of alleged bias in coverage.
Politics
By Allan Mungai
5 months ago
.