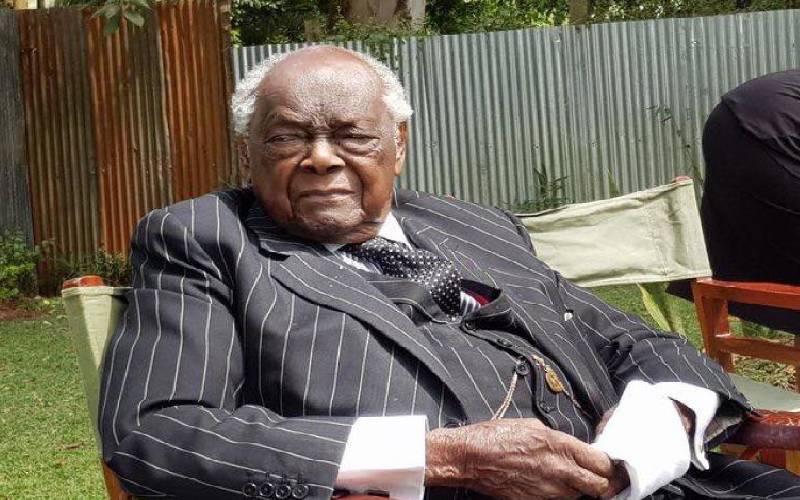 As Kenya's first Attorney General (AG) Charles Njonjo turns 101 years today, we take a look at his role in both Jomo Kenyatta and Daniel A rap Moi’s governments and how much power the only surviving member of Kenya’s Independent Cabinet wielded.

In both the Kenyatta and Moi Cabinets only the foolhardy stepped on Njonjo’s toes.

Both Presidents took the man, who had a penchant for pin-striped Savile Row three-piece suits invariably accessorised with a fresh carnation on the lapel, micro-dotted shirts and ornate timepieces, seriously.

During his colourful and often controversial career as Attorney General and Cabinet Minister, he often rode in the limousines of Presidents Jomo Kenyatta and Daniel arap Moi, and participated in the selection of ministers, ambassadors and other key members of Government.

At the pinnacle of his political career in 1983, the man nicknamed ‘Duke of Kabeteshire’ due to his English mannerisms was second only to Moi – despite not being the Vice President.

During his 17-year stint at Sheria House as AG, Njonjo occasionally shocked the nation by expressing views that were diametrically opposed to the country’s foreign policy or even that of the Organisation of African Unity (OAU), not to mention prevailing local sentiments.

For instance, he was widely known to be a proponent of continued white rule in Apartheid South Africa, Rhodesia (present-day Zimbabwe) and Mozambique; he wanted Kenya to maintain diplomatic ties with the pariah apartheid South African regime; he negotiated the Israeli military raid on Entebbe airport in Uganda to free Israeli hostages held by terrorist aeroplane hijackers; and he was strongly opposed to the existence of the tribal grouping known as the Gikuyu, Embu and Meru Association (GEMA), which he had registered in 1971 and thereafter sought to proscribe in 1976.

To his credit, Njonjo initiated many of the laws that transformed Kenya from a colony to a free and independent country and established the many institutions that became the bedrock of democracy and good governance in Kenya under Kenyatta’s 15-year leadership.

When he hit 60, Njonjo felt it was time to move on. In an orchestrated and well-choreographed move, he called a press conference to announce his resignation as AG and intention to contest the Kikuyu parliamentary seat, only a day after the incumbent MP resigned to allow Njonjo to vie for the seat.

Exactly as expected, he easily won the seat and transformed himself into a politician overnight. He was appointed Cabinet Minister in the specially-minted Ministry of Justice and Constitutional Affairs, a position he held until 1983.

The ministry strategically roped in the Judiciary and, as it was during his days as AG, Njonjo worked closely with the national security apparatus – making him the single most powerful person after the President.

After the putsch failed, the suspected soldiers were court-martialled and politicians taken to court, Moi decided to purge the ruling party, KANU, and the Cabinet of those he believed wanted him out of power.

Among them was Njonjo, who was eventually labelled ‘traitor’ by fellow Cabinet Minister Elijah Mwangale.

What followed was a protracted judicial commission of inquiry that concluded Njonjo was guilty of abuse of office and that he had tried to take over power from President Moi.

He was forced to resign from Government, effectively destroying his political career.

Moi and Njonjo would, years later, patch up things together.

And, it wasn’t only Njonjo who experienced the devastating effect of Moi’s backhand.

IEBC sparked outrage with its call upon Kenyans to verify whether they indeed signed in support of the BBI referendum.