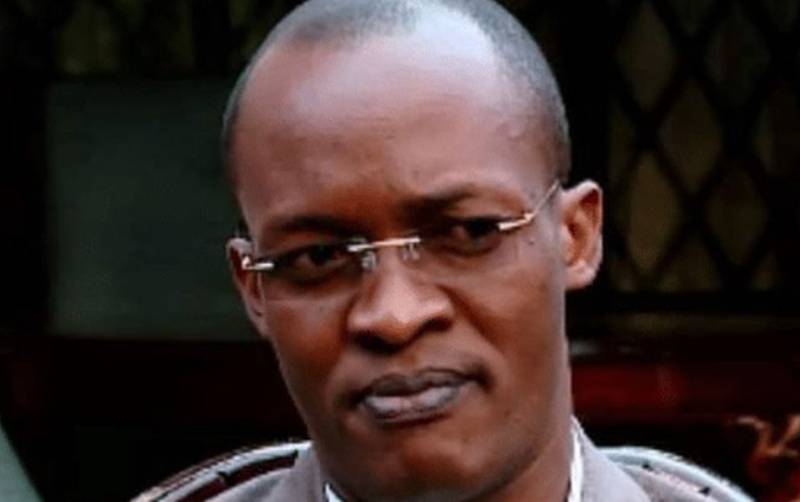 Police are holding three suspects who abducted a businessman in Nairobi while impersonating anti-graft and Kenya Revenue Authority officers.

According to police, the suspects, who included Godwin Agutu (pictured), had demanded Sh2 million from the victim to let him free for alleged tax evasion. They produced badges to show they are officers from Ethics and Anti-Corruption Commission (EACC) and KRA which have turned to be fake.

Agutu was recently in the news alleging face masks donated by Jack Ma had been stolen from the airport and sold to Tanzania. The claims were vehemently denied as lies.

Police said the six stormed the victim's offices in Nairobi on September 26, 2020, after which they took his laptop and left in two Prados registration numbers GKB 070B and KCY 280Q.

According to DCI boss George Kinoti, the suspects appeared again on September 29 now demanding the Sh2 million bribe. When the victim could not raise the amount, they forced him into GKB 070B  and drove off to Lutheran House along Nyerere Road Nairobi.

While in their custody, the victim was forced to contact his family members to get the amount, but only managed to raise Sh500,000 whereupon the suspects escorted him to his house at Westlands in Nairobi and took the cash, Kinoti added.

“According to the victim, the suspects were ruthless while claiming they are detectives from EACC and KRA,” he said.

It was then that police were contacted and managed to trace the suspects to Lutheran House arresting them, further establishing that the registration number GKB 070B  was assigned to a Judiciary Land Rover Discovery.

Upon interrogation, according to Kinoti, Agutu said he was running an NGO called Network Action Against Corruption (NAAC), and that he was working jointly with the suspects at large who are allegedly KRA officers. Police are looking for the three who were identified as Houdouvia Njoroge, Harrison Ochar and Brian Kimemia, Kinoti said.

Police plan to charge the suspects with abduction and demanding with menaces.

Agutu was recently captured on a local television station commenting about the alleged Covid-19  medical supplies graft. Authorities then dismissed him as an imposter. He is facing other similar charges before courts.

He said he had investigated and established there was graft in the procurement and supply of medical equipment for Covid-19  at the Kenya Medical Supplies Agency (Kemsa).

EACC is investigating the claims of graft and wants six top officials at the agency be prosecuted for flouting procurement rules.

By Peter Kimani 11 hrs ago
Premium Raila of old returns to Kamukunji, and he's singing a not-so-new song of redemption