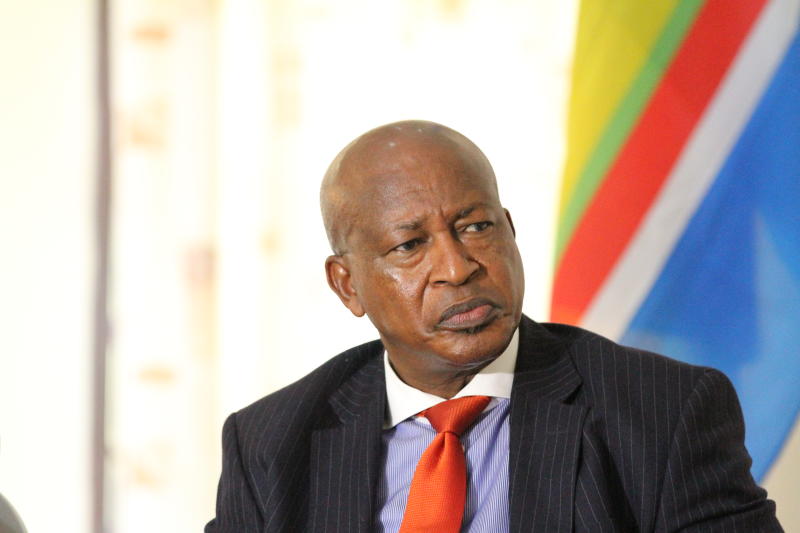 A row has erupted among Judicial Service Commission (JSC) members who oversaw the recruitment of judges in the middle of a standoff between the President and the Judiciary.

Reports indicate that JSC commissioners who interviewed the nominees that Judiciary now accuses President Uhuru Kenyatta of not appointing have now turned against each other in a blame game that exposes the divisions in the Judiciary’s employer.

Chief Justice David Maraga sits in the JSC both as its chair and head of the Judiciary. Attorney General Kihara Kariuki (pictured) and Macharia Njeru, who represents Law Society of Kenya (LSK), are members of the commission.

Justice Maraga, in a public outburst, has accused the AG and Uhuru of disobeying court orders. According to Maraga, the AG never filed an appeal to challenge a High Court ruling requiring Uhuru to appoint the 41 judges within 14 days.

The AG, in defense of the President, blames JSC for appointing judges with questionable character. He also accuses the High Court of failing to furnish him with the typed proceedings to enable him appeal its ruling.

The LSK is said to be plotting to de-register Justice Kihara and his deputy, Solicitor General Ken Ogeto, over what it claims to be failure to carry out their duty to advise Uhuru to make the appointments.

Rarieda MP Otiende Amollo, who is also a lawyer, says none of the protagonists is acting right in the public spat.

“While the CJ is right to insist on the appointment of CA judges, a letter rather than a press conference would have sufficed. Also, while the AG’s advice to the Executive on the issue is wrong, LSK cannot discipline him or SG because they were not appointed by LSK,” said Amollo on his Twitter account.

The LSK started the blame game, with Njeru claiming that his case for the commission to nominate two lawyers from private practice to the Court of Appeal were rejected.

“I made a strong case for at least two practicing advocates to be appointed, but my position was overwhelmingly rejected. I am, therefore, circulating my dissent in the interest of the community of lawyers that I represent,” Njeru said immediately after the commission listed names of judges it had nominated.

This was followed by a court case filed by lawyer Adrian Kamotho seeking to compel the President to appoint the nominees as judges.

The JSC, LSK and Maraga supported the case, while the AG urged the court to dismiss it as the President had expressed his reservations with the names forwarded to him.

The court heard that Uhuru had a right to ensure only men and women with unquestionable character would be judges.

However, JSC, LSK and Maraga held that the President was represented in the commission and that National Intelligence Service (NIS) had failed to substantiate its reservations against some of the nominees.

Despite the unfolding sharp divisions, senior lawyer Nzamba Kitonga says JSC’s function is about collective responsibility. He said despite Njeru raising his reservations, he was bound by what other commissioners resolved.

According to Kitonga, Justice Kihara's taking of a different position from that of the commission amounts to conflict of interest.

Meanwhile, the AG has urged the High Court to dismiss a subsequent case seeking to allow the nominees to assume office as judges without Uhuru’s appointment.

In the case filed by Kamotho, the AG argues Justices Lydiah Achode, Chacha Mwita and James Makau have no powers to reopen Kamotho’s case, as it had already made a finding in his case.

“This Court having rendered its final judgment on February 6, 2020 with respect to the decree holder (Kamotho) and prayers sought in his petition before this court, the petition cannot be re-opened for further orders, which in any case were sought by the decree holder as one of the prayers but were declined,” the AG argued in his new filings seen by The Standard.

Kamotho went back to the court after Uhuru failed to appoint the judges within the 14 days window provided by the court. He argues that the President had no option but to obey the orders.

“Having failed to appoint the judges recommended by the first interested party (JSC) herein as constitutionally bound, the respondent has not complied with the orders of this court and is blatantly in contempt,” argued Kamotho.

The lawyer wants the court to order Controller of Budget to authorise withdrawal of funds for the new judges' salaries and the Inspector General of Police Hillary Mutyambai to provide them with security.

“In view of the reluctance, unwillingness and refusal by the respondent to show respect for the Constitution and the honourable court through compliance, the applicant has no other way of enforcing the orders of the court,” argued Kamotho.

After the High Court ruled that Uhuru should appoint the judges within 14 days, the AG filed a notice to file an appeal challenging the orders.

“The reasoning adopted by the High Court negates the Constitution’s designation of the President as the Head of State and government and curtails his solemn constitutional duty and authority to ensuring that the actions of any arm of government, particularly those that require his hand and seal in order to be brought into effect are compliant with the law and the Constitution,” said Kihara.