General Mwathethe is also expected to hand over to Chief of Defence Forces (CDF) designate General Robert Kibochi in an event to usher him in his new appointment.

The event also marks the end of the tenure of General Samson Mwathethe, who served for one term (4 years) plus an additional year that was extended by President Uhuru Kenyatta.

The KDF rules allow one to serve for one term of 4 years only, but the President is allowed, at his discretion, to extend the term for a year or two.

The Number One Board, the organ that decides changes in the appointment and promotion of senior military and possible retirement or extension of contracts of the Kenya Army, Kenya Navy and Kenya Air Force commanders, proposes the next in command for the Commander-In-Chief of the Armed Forces to appoint.

Then, there will be a handover of the KDF flag.

General Mwathethe who comes from the Kenya Navy will exchange the KDF flag with General Kibochi.

Similarly, after the national anthem, there will be a 17- gun salute for the out-going CDF to honour General Mwathethe for his selfless service to the country.

Further, there will be a signing of documents to confirm the official handing over of command.

The table is already set, pen and papers on the table, ready for the signatures from the two top generals.

The icing on the cake will be the pulling of the military jeep carrying the outgoing CDF. This is a ceremony, that marks the end of service of a general. 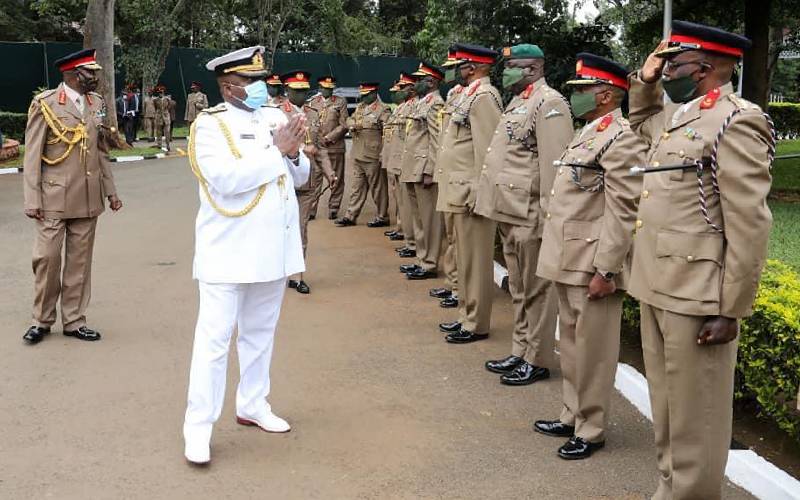 General Robert Kibochi will be sworn in on Monday, 12, May 2020 at State House, Nairobi.

The ceremony will be attended by President Uhuru Kenyatta, top generals and senior civil servants.

The CDF position is a rotational office in Kenya's military. At least for the three generals who have taken the baton of leadership.

General Kibochi, who is the incoming CDF comes from the Kenya Army.

General Mwathethe served from the Kenya Navy while Julius Karangi,  Mwathethe's predecessor, did his service under the Air Force.

The CDF position is the highest in Kenya's military, the incumbent being the principal adviser in matters defence, to the President of the Republic. 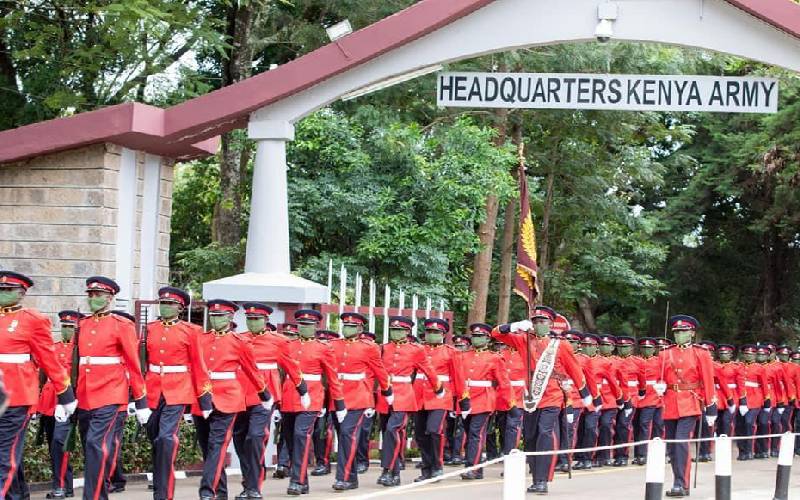 President Uhuru Kenyatta is the Commander-In-Chief of the Armed Forces.

A book, War For Peace, edited by military officers was also launched.

“The book delves into the unfinished agendum of Amisom’s coming exit — and what it means for Kenya. It is a worthy tribute to our soldiers who fought and even paid the ultimate price and an invaluable read for students, experts and practitioners of military history and strategy,”  writes General Mwathethe.

Gen. Mwathethe leaves the military with his head high knowing he has left a stable institution having served his entire term when the country was and is still at war in Somalia to contain Al-Shabaab terrorism

He rebuilt the counterinsurgency and counterterrorism strategy of Kenya, which seeks to move the military from kinetic engagement to soft power.

Further, he introduced the concept of soft power in which the military is moving out to speak to radicalised youth and radical Muslim leaders about the dangers of violent extremism.

In 2017, President Uhuru appointed him to chair the Blue Economy implementation committee.

Under his leadership, incidents of piracy were reduced at the Indian Ocean and the military expanded by constructing a number of support Units.

Modika barracks that has been under construction at Garissa and was commissioned in December 2019. The Barrack is home to 6th Brigade. In the same year, the Kenya Army established 17 Kenya Rifles a new Unit which received its Presidential and Regimental Colors during the Jamhuri day celebrations.

After he took over in 2015, insiders say he established new camps at various places and especially in Somalia to help in conducting patrols, assault, raids and other defensive operations to destroy threats of any nature.

Other officials within KDF under his leadership say he has managed to address the welfare issue of the officers and soldiers.