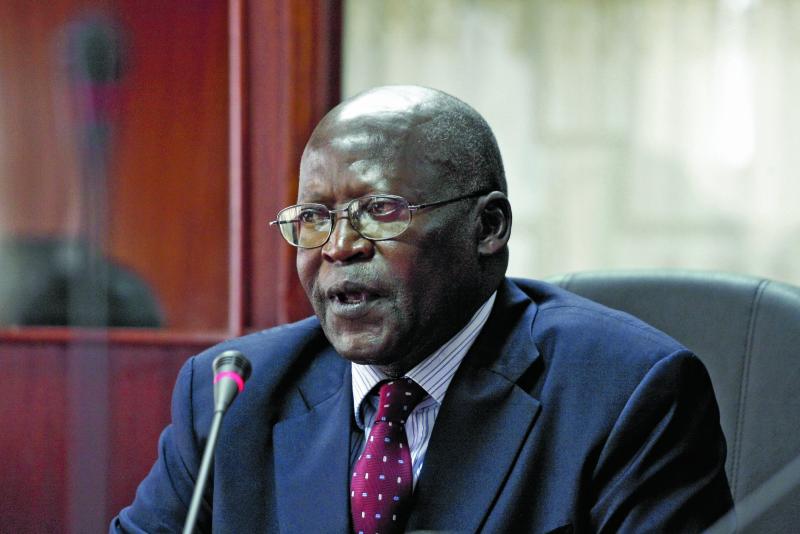 A court has quashed revocation of a title deed for 400 acres, which belongs to retired Supreme Court judge Phillip Tunoi (pictured).

The National Lands Commission (NLC), which had cancelled the title following a land grab claim dating 47 years ago, had also directed the judge to pay the complainants - Kaptuktuk Farm Limited members - for the contested property to regain possession.

However, Justice Milicent Odeny found the commission had no powers to settle a dispute that had already been determined by the court in 1983 in favour of the retired judge. The contested land is situated at Kaptuktuk in Uasin Gishu County.

Seven members of a land-buying company, Kaptuktuk Farm Limited, had lodged a complaint against the judge before NLC's historical land injustices committee claiming that he fraudulently transferred or acquired 400 acres of their Kaptuktuk farm comprising of LR No 9624 and LR No 8409/1 when they hired him back in 1974 as their conveyancing advocate.

Kibirgen Kimaiyo, Abdi Sitienei, Elias Busienei, Kipsang Masai, John Kisugut, Silvester arap Choge, and Philip Sawe claimed they approached Tunoi, who was then a lawyer at Nyairo & Company Advocates, to be their lawyer and to assist in the purchase of the contested land from Goberdas Vakatram Kaptuktuk Farm Ltd and paid Sh1.3 million.

They claimed the money used to finance the purchase was contributed by members, sale of farm machinery, a Barclays Bank loan and delivery of wheat from Kenya Farmers Association.

However, the judge produced purchase documents showing that he had bought the piece of land. He told the court that sometime in 1983, the seven lodged a case against him and the court ruled in his favour, hence retaining the contested land.

Tunoi narrated that he together with his family occupied the property and developed it without interruptions since 1990.

While agreeing with the retired judge, Odeny found NLC had overstepped its mandate by entertaining the seven complainants.

“When a matter has already been handled by the court or is pending before the court, the NLC does not have the mandate to hear and make recommendations unless the court has referred the matter to it for arbitration or expert evidence. I find the NLC acted ultra vires in hearing and giving recommendations on a matter that had been heard and determined by a competent court,” ruled Odeny.

Before NLC’s committee, the judge had objected, saying the claim against him had already been determined. The commission decided to settle the objection first and informed both parties it would notify them on when they would appear for a hearing.

Tunoi told the court that NLC remained silent and he came to learn that the Registrar of Lands had ordered the title he held be revoked or in the alternative Kaptuktuk Farm Limited should seek compensation from him for the land at the current market price.

Previous article
Virus: A war Kenya must win together with other battles