Analysis: What next for Governor Sonko 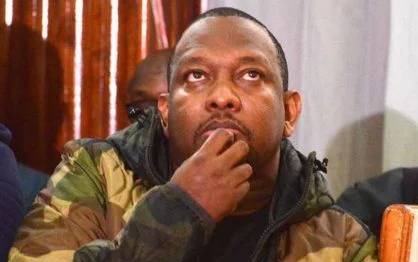 The Nairobi City County Governor Mike Mbuvi Sonko (above) is a man caught between a rock and a hard place.

Since day one when he entered office, the embattled governor has been caught in crossways and dilemmas. Sometimes having to make decisions he would later regret.

First was when his Chief assistant, Deputy Governor Polycarp Igathe bailed out on him, just six months after a resounding win in the 2017 general elections.

Sonko chose to remain without a substantive deputy, a move that threw his plans off-balance, complicating his tenure.

His moves have been termed by many as risky. Moves that opened protracted battles, in and out of City Hall between him and the members of the County Assembly.

These manoeuvres have almost brought the county to its knees and risking his job as the city sheriff, prompting the national government to jump in and save the boat from sinking even further.

The Governor had fewer options left, or say, only two options: Give up major functions of the county including finance, health, transport, public works and planning or face impeachment by the MCAs who mostly acted on orders from their political masters.

He had to wave the white flag. Sonko signed off key functions of the county government of Nairobi, in order to stay afloat in the turbulent political waters.

An astute politician and a clever horse trader, this way he survived the impeachment and somehow slowed his prosecution.

The move which seemed hurried, perhaps to protect his gubernatorial title, is slowly coming back to bite Mike Sonko. The Governor is slowly becoming just that, a governor without portfolio.

The transfer of the key functions was done at the dusk at State House and was overseen by President Uhuru Kenyatta, Senate Speaker Ken Lusaka and Devolution Cabinet Secretary Eugene Wamalwa.

Sonko, who now admits he had no time to go through the document he signed, is now crying foul as he feels shortchanged in the deal entered into with laughter and satisfaction. Perhaps, the honeymoon is over.

Barely a month since the bloodless coup took place, cracks are already showing. This time round, Sonko is blaming the national government for being used by a cabal he calls “the system” to frustrate him. He has become a stranger in his own house.

Sonko now admittedly feels like he had made a deal with the devil. He has now vowed to fight tool and nail to reverse the transfer of county functions to the national government.

“Please forgive me, I will never repeat that mistake again. In fact, I am starting the process of terminating the Deed of Transfer just like any other ordinary contract. I will now personally go to court to have it terminated. Let them kill me or jail me if they want.

When we started this process, the president had good intentions, but some of his officers, especially the ones who hate me, have hijacked the process to embarrass and frustrate me with impunity,” regrets Sonko.

“It is not like he had many options on the table. He was looking at a possibility of losing his seat through impeachment which would mostly go through. Honestly, it was a take or leave it situation for him. So he had to make a decision anyway, but it turned out to be not an option at all,” says Herman Manyora a political analyst.

Sonko’s latest woes seem to have erupted from his efforts to help the vulnerable communities in the city during the coronavirus pandemic.

The Governor claims that his team was barred from distributing foodstuffs, sanitizers and masks to the city residents. Further, Sonko alleges that his officers have been stopped from conducting the daily fumigation in estates and slums to contain the spread of Covid-19.

“May the Lord punish all the senior government officers at the Office of the President who gave instructions for the Kibra, Kencom and Buruburu sanitization booths erected by the Sonko rescue team to be vandalized,” he posted on-line.

But the Governor’s claims have come just two days after he had a meeting with the Deputy President William Ruto.

Sonko says the meeting was just to plan for the operations of the County Government of Nairobi among other national issues.

But it could part of a formidable strike-back strategy backed by the DP who is not a political minion at any rate.

“It is true the meeting happened and it was known to even the president. We discussed many issues affecting the county and the country at large,” the governor disclosed to The Standard

The big question now is now whether or not Sonko will succeed to terminate the agreement he signed with the national government.

What are the procedures?

“There is a clause in the contract signed by the Governor that allows for termination of the contract that was entered between Governor Sonko and the Ministry of Devolution. If the termination was to happen, it has to be initiated by either of the parties if they feel like what they agreed upon is not being adhered to by the parties,” says Bernard Mulwa who is Sonko’s Personal Assistant.

Already, one party, which is the County Government of Nairobi represented by Governor Sonko has complained of incessant obstruction by the National Government.

Charles Kanjama, a constitutional lawyer, also alludes to the fact that there is an opening for termination of the contract if the parties if need be.

“There is no contract that cannot be terminated whether it is a tenancy agreement, employment agreement, marriage or whichever agreement. But if you don’t terminate it in the right way it could become a breach of contract. But constitutionally, there is no transfer of functions that cannot be reversed,” says Kanjama.

“There are basically 3 ways Sonko could legally get out of this. First is by the County Assembly passing a resolution that the agreement is not in the best interest of the people of Nairobi County. Further, the County Assembly would write to the senate who, if it agrees, would write a report revoking the transfer of functions. Second is to go to court to have the deal declared null and void. Finally, is by consent, where the two parties sit and agree to do away with the agreement,” says Kanjama.

Sonko has already chosen to move to court to seek the termination of the contract. Maybe, the choice is informed by the bad blood between him and the majority of the MCAs, who had vowed to impeach him.

“I will not sign (sic) [resign]. In fact, this is the time to terminate the transfer of functions deed. To date, I have not been furnished with a copy of the deed. I was not given sufficient time to even read the draft. I was told it is a good thing on service delivery to the great people of Nairobi as I deal with my court cases.

According to Ben Mulwa, the decision to move to court would be the beginning of the cancellation of the agreement. However, the period it would take to revert the functions from the national Government is not clearly stated in the deed.

“Primarily, as the governor had said he would move to court. he would write to his co-signatory who is the Cabinet Secretary for Devolution Eugene Wamalwa, indicating the intention to terminate. However, the period it would take to terminate the deal is not clear whether it would take a day, a month or year,” added Mulwa.

It would also be an uphill task since there is already a government in place. The handover was followed by the creation of the Nairobi Metropolitan Services (NMS) led by Maj Gen Abdalla Badi. However, Sonko has had a frosty relationship with NMS.

Similarly, there is a different school of thought that says the governor is currently in a weak position to fight back and actualize his threat.

“Terminating the deal maybe his wish. But the legal gymnastics involved may be a big challenge for him. The exit clause in the deed is very tight for him to manoeuvre through in the court of law. Even if he would take the direction, it would take a lot of time. It might be even [be] past the two years in the agreement, “says Manyora.

“… His game should be like a leopard in hunting range, which waits for the right moment and pounces on its prey. Let him wait for that opportune moment and beat them at their game.  That right time will only be determined by circumstances.

The direction was meant to ensure the smooth running of services at a time when the governor was barred from accessing his office at City Hall over graft charges. He was also facing an impeachment motion from members of Nairobi County Assembly.

By Josphat Thiong’o | 21 hours ago