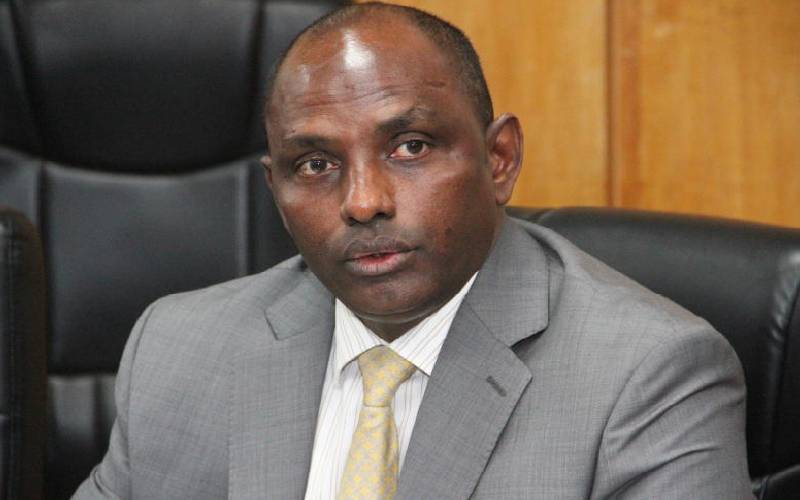 The job requires 15 years of experience in a management position, but Prof Abdille has 11. He also holds a degree in Microbiology, which is irrelevant to the job.

For one to qualify for appointment for the position, he/she is required to be in possession of a degree in Finance, Economics, Law, Engineering, Accounting or Community Development, and any other related degree.

The decision by the MPs exposed Mr Yattani (pictured) for by-passing Yusuf Mbuno, who has been holding the position in an acting capacity, despite emerging top in the interviews.

“The committee, having considered the suitability, capacity and integrity of the nominee following the vetting process, and taking into account its observations, hereby recommends that the National Assembly rejects the nomination of Prof Mohammed Hussein Abdille for appointment to the position of the chief executive officer of the National Government Constituencies Development Fund Board,” said the report by the committee chaired by Igembe North MP Maoka Moare.

Signs that Abdille was headed for a rejection by the House were clear on the day Speaker Justin Muturi announced his nomination.

Mr Muturi had to cut short his statement to calm MPs, who were chanting “No! No! No!" when he read out the name.

The NG-CDF position has been vacant since 2011 when then chief officer Agnes Odhiambo’s term expired. Since then two attempts to recruit a substantive CEO have flopped. Mr Mbuno has been holding the position in an acting capacity.

According to the CDF Act, a substantive chief executive should serve a three-year renewable term.

Kenya subsidiary legislation, 2016, states that the National Assembly shall, within 21 days of the receipt of the nominee, reject or approve the nomination.

Following yesterday’s rejection, the Treasury CS will be required to bring a fresh nominee from the list of the remaining two to the House for vetting.

It is only if all the three nominees are rejected by the House that a fresh recruitment process will begin.

The board had submitted names of Mbuno, Abdille and Akello.

Abdille was dismissed from Masaai Mara University on March 5 over claims of gross misconduct. He was deputy vice chancellor in charge of Administration, Finance and Planning.

Zelemoi was accused of abusing office leading to misuse of assembly vehicles for personal gain.