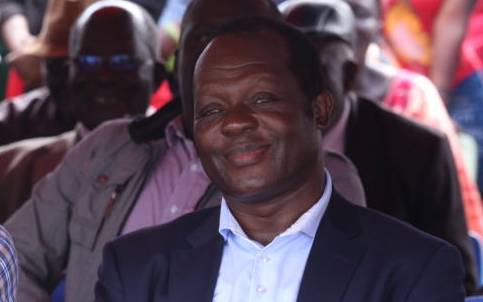 Doris wished Tuju quick recovery on behalf of the Moi family. She was received by Tuju’s close family members.

Tuju (pictured), who is also Jubilee Party Secretary-General, was among 18 people involved in a road crash along the Nakuru-Nairobi Highway on February 12, 2020.

He was on his way to Kabarak for the burial of Mzee Moi when his Toyota Prado collided head-on with a 14-seater matatu at Magina.

She taught me love, Tuju eulogises his mum

The CS sustained serious injuries and was airlifted to Nairobi for specialised treatment.

Last week Jubilee Party in a statement on Tuju’s progress said he was responding well to treatment and making good progress in his recuperation.

“He continues to receive very good care under a team of specialists and nurses at the Karen Hospital,” said the party’s Communication Director Albert Memusi.

Tuju’s doctors on Thursday also gave an assurance that he was in a stable condition.

This is probably not the first time Tuju has cheated death. On January 24, 2003, he was involved in a plane crash that killed one minister and two pilots.

Tuju, then Tourism minister, was in the company of Narc politicians who had gone to Busia for a homecoming party to celebrate their three-weeks-old election win.

Those who were also onboard were Robinson Githae, Wanjiru Kihoro, George Khaniri, Martha Karua and Linah Jebii Kilimo among others.

Moody Awori, a minister of Home Affairs at the time, had hosted them for a homecoming party at his Funyula home.

After the party, they boarded a 24-seater Gulfstream at Busia Airstrip for Kisumu. The plane hit a power line on take-off and crashed.

Labour Minister Mohammed Khalif together with two pilots died with the others sustaining injuries.

Ms Kihoro stayed in a coma after the accident for four years.

Tuju told KTN News’ Untold Story in 2017 that he cheated death after he found the late Ahmed Khalif on the seat that had been designated for him at the front of the plane.

He, therefore, took one at the back of the ill-fated Gulfstream.

“Khalif had gone to the mosque and we were waiting for him. It took too long and it was getting hot. So I walked out to the pilot and asked why we were still there” Tuju told KTN.

“When Khalif arrived, he went and sat on my seat at the front. I couldn’t tell him to leave my seat. Unfortunately, when the plane crashed he (Khalif) hit his head on the barrier and died,” Tuju said, describing the event as a very traumatic experience.