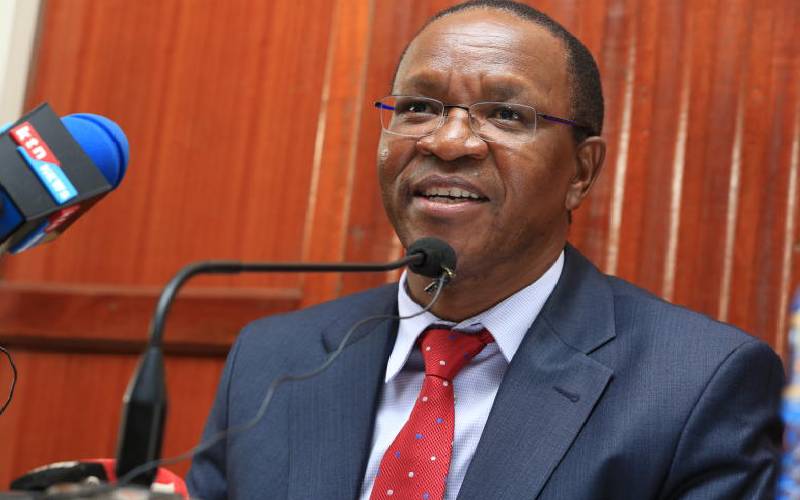 Interior Principal Secretary Karanja Kibicho (pictured) was the complainant in the case revolving around a letter that purported to expose a plot to assassinate Deputy President William Ruto, a court heard yesterday.

A witness, Yvonne Anyango, an investigating officer, told the court that Kibicho's name was later dropped.

She was testifying in the trial of the Secretary of Digital Media at State House, Dennis Itumbi, who is facing forgery charges. He has denied the charges.

Anyango was being cross examined by Itumbi’s lawyer, Katwa Kigen, who put her to task to explain why Kibicho’s name as a complainant was dropped.

“The name was dropped because we did not find it necessary anymore,” Anyango told Milimani Chief Magistrate Martha Mutuku.

The court was informed that Itumbi’s co-accused, Samuel Gateri, was supposed to be a prosecution witness in the case, but was arrested after he commented on the letter.

The officer also told the court that Itumbi’s phone had been reprogrammed at the time she was conducting her investigations and that she suspected it had been tampered with.

According to the witness, Itumbi’s phone was in use until the letter surfaced. She testified that investigators could not obtain data from the phone.

However Itumbi's lawyer argued before the court that messages in his client's phone might have deleted automatically.

When asked from which Cabinet Secretary the letter in question might have come from, Anyango said she did not know.

Asked why she requested that Itumbi be detained to allow her get forensic details from his phone when the data only took six minutes to extract, the investigator told the court that she had consulted forensic experts who said the process would take 14 days.

Asked whether she interviewed all the 256 people in the WhatsApp group going by the name 'Tanga tanga,' the investigator told the court that she only interviewed four people listed as administrators of the group.

The court heard that the letter in question had earlier been circulating in another group going by the name Kiambu forum which the investigating officer did not investigate.

The letter, which police say was fake, claimed that there had been a meeting at Hotel La Mada on Thika Road with the DP as the main agenda.

Three Cabinet secretaries who were named in the letter were summoned by Directorate of Criminal Investigations. They declined to record statements until the complainant made a substantive statement.

Later, Itumbi was arrested on suspicion of authouring the letter.

In a replying affidavit to an application by the police to detain him further as investigations continued, Itumbi offered to show the the court a video and audio recordings purportedly exposing discussions on the plot to assassinate Ruto.

“I have an audio and a video recording of material that could show, subject to the investigations, that a meeting could have happened at a place called La Mada, at which discussions were held on possibility of assassination of a member of my employer, particularly the Deputy President of the Republic of Kenya. I request to play the audio-video content in court, in camera,” Itumbi said in court papers in July last year.