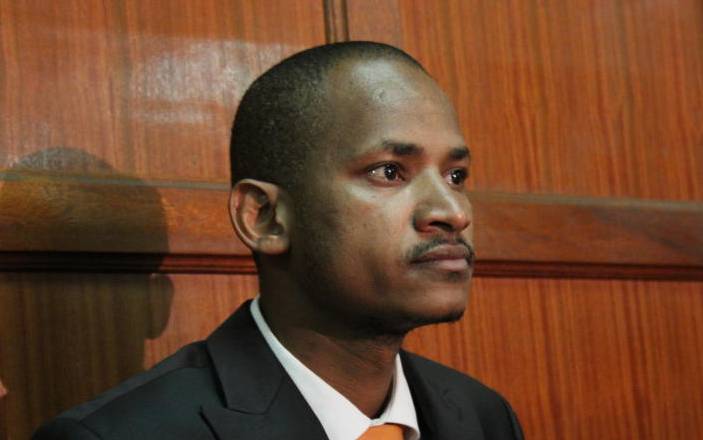 The case of Embakasi East Member of Parliament Paul Ongili alias Babu Owino on Monday morning failed to proceed at Milimani Law Courts after members of the public became rowdy.

Chief Magistrate Francis Andayi was forced to adjourn the case up to 3 pm after noise became intolerable making it impossible for him to preside over the case.

"We cannot proceed with this hearing given the noise from the corridors. Now I ask the police to escort those making noise out of the court,” said Mr Andayi.

State Prosecutor Jacob Ondari’s submission was interrupted by the noise. He had prayed to court not to release the legislator on cash bail or bond, arguing that the family of Felix Orinda (DJ Evolve) had objected fearing that the lawmaker could interfere with the witnesses.

This plea was, however, opposed by Babu’s lawyer Cliff Ombeta. The Chief Magistrate will rule on the bail application at 3 pm.

Babu Owino (pictured) was remanded for seven days at Industrial Area Remand Prison after the court ordered the preparation of the bail report by the probation team.

He had pleaded not guilty of shooting Felix Orinda alias DJ Evolve at B Club on Galana Road in Nairobi last week.

The youthful legislator appeared before Chief Magistrate Francis Andayi at Milimani Law Courts where he was charged with 'unlawfully attempting to try to cause the death of Felix Orinda by shooting him on the neck'.

His return to court comes days after he failed to appear before Chief Magistrate Kennedy Cheruiyot over the mention of his incitement to violence case.

Babu’s lawyers told the court that he was unwell and could not be able to attend the proceedings. Magistrate Cheruiyot set mention of the case for February 3, 2020, and ordered him to be treated at the Industrial Area Remand Prison hospital.

A week ago, Chief Magistrate Andayi rejected pleas by defence lawyer Danstan Omari to have Babu remanded at Gigiri Police Station but ordered him to be taken to a remand prison.

The legislator’s lawyer Cliff Ombeta challenged the prosecution’s plea to detain the lawmaker on the ground that he could interfere with the witnesses.

Ombeta said that the prosecution had no proof to warrant the detention of his client.

“Interfering with a witness is a criminal offence. The question is when did he do it and where?” he asked.

“He who alleges must prove before the court.  The accused person doesn’t have a case in Kibera court,” he added after he challenged the assertion by the prosecution that the MP had another case in Kibera law court.

Ombeta argued that since the MP had denied the charge, it was only prudent for Article 50 of the Constitution to apply, which accords him the presumption of innocence until proven guilty. He further argued that such would grant his client the right to prepare for his case.

Mr Omari accused the prosecution of making a statement that could make up premature judgment implying that the MP was already guilty.

“The DPP only presents evidence and it’s the court to convict," he said while questioning the DPP’s statement that it had evidence that can secure a conviction.

Mr Omari pleaded with the court to treat the legislator normally like any other suspect and not with a preconceived mind that he was a notorious person with criminal tendencies.

The Chief Magistrate had argued that both prosecution and defence team had not cited the views of the witnesses. On this account, he ordered the bail report to be prepared by the probation tea and availed in court when the case will be mentioned on January 27.

The DJ identified as Felix Orinda alias DJ Evolve was in critical condition at the Nairobi Hospital where he was rushed after the shooting.

It was reported that DJ Evolve got into an argument with Owino at the club before the shooting happened at about 7 am. The two are bosom buddies, close associates said.

Friends who visited him at the hospital like, Radio presenter Joe Muchiri, who is known to him, revealed that doctors had told him that Orinda’s major organs had not been affected by the bleeding.

In a short video, Embakasi Member of Parliament (MP) Babu Owino, who is facing attempted murder charges, is seen whipping his pistol before shooting a man believed to be Orinda.

The youthful MP is seen smoking shisha in the company of other revellers.

The 18 seconds long CCTV footage ends with two men dragging the wounded man from the club.

From the time stamp on the video, the incident happened at 7.16 am.

After the shooting, Owino, other revellers and management of the club rushed the DJ to the Nairobi Hospital. He was rushed to theatre and a bullet that had been lodged in his neck was removed. Doctors say DJ Evolve is in critical condition but stable.

However, the prosecution rubbished this narrative today when it told the court that the medical documents from the hospital were dated January 18, a day after the MP was already arrested and put in police custody.

It argued that it was impossible for Babu to facilitate the treatment for the victim while in police custody.

As of January 17, Orinda was scheduled to undergo a second operation to remove a blood clot in his neck after doctors had removed a bullet that was lodged in his neck.

This has been corroborated with his friends who have visited him at Nairobi Hospital.

The Directorate of Criminal Investigations on Saturday on Friday said that its officers recovered a firearm believed to have been used by the legislator.

“Detectives have managed to recover the firearm that is suspected to have been used by Hon. Babu Owino at the B Club shooting incident,” DCI stated on its twitter page.

“Nine rounds of ammunition and a spent cartridge have also been recovered and placed as exhibit awaiting analysis by ballistic experts.”