'I only reported Msando's abandoned car, I had nothing to do with his death' 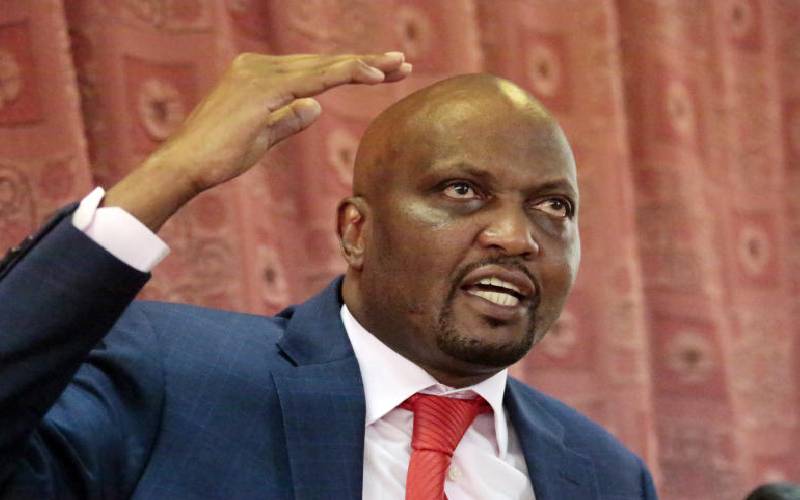 Gatundu South MP Moses Kuria (above) has described reports linking him to the disappearance and murder of former Independence Electoral and Boundaries Commission (IEBC) ICT manager Chris Msando in July 2017 as character assassination and vowed to sue those peddling the claims.

The controversial MP distanced himself from the murder saying he only gave the information he had then and had nothing to do with the murder.

“I played my role as a responsible leader I gave information about Msando's abandoned vehicle to the police,” said Kuria.

Speaking on Tuesday when he addressed the media over the matter, the Jubilee MP threatened to sue anyone linking him with Msando’s killing, adding that he respected human life and could not wish death to anyone.

“I am unhappy with the accusations being bandied around by the media and on social media over the murder,” he said.

Kuria challenged the media and the opposition leaders to push for justice for Msando and his family, adding

“How many people have followed up on the matter, be it the media or Opposition leaders who are now in government? The media can do more,” he said

He cited the recent demos in Mwiki over poor roads that left a 17-year-old teenager dead, saying the media was silent on the matter

“An engineering student was killed just because of mere protest yet the media, went silent like it never happened, it is unfortunate”

Kuria had promised to set the records straight over Msando’s murder saying he is tired of being linked to the killing in the run-up to August 8 General Election.

“I am sick and tired about people connecting me to the murder of Chris Msando. I will address the media January 20, at 3pm about this whole issue,” he wrote on his official Facebook page on Saturday.

Kuria landed in trouble after a Facebook post on Msando’s disappearance on July 31, 2017 castigating the slain ICT boss for having a good time as the country was looking for him hours before the news of his death broke out.

The MP even went ahead to call Msando an ‘idiot’.

The post with a photo in which Kuria is pointing at a grey Land Rover Discovery in Roysambu and which belonged Msando was later brought down.

Kenyans have never forgotten the incident and have constantly reminded the MP of the same with others linking him to the gruesome murder.

The fact that Msando’s body was found with another body a woman did not help matters with Kenyans questioning how the legislator knew that Msando was in the company of a woman, and how did Kuria trace the car to Roysambu.

Msando’s body had visible wounds and an autopsy revealed that he was strangled.