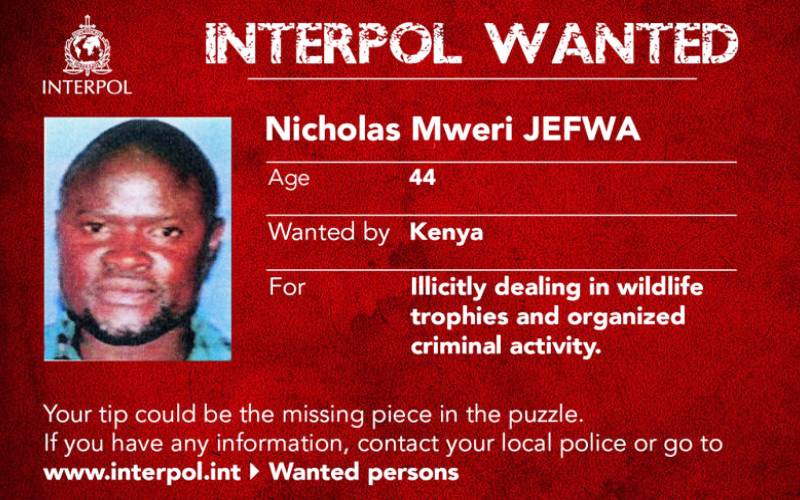 Nicholas Mweri, 44, and Samuel Bakari, 29, are being sought for allegedly illicitly dealing in wildlife trophies and organised criminal activities.

The brothers, who went into hiding in April 2015, have been on Interpol’s Red Notices list since 2016. They are wanted in connection with the exportation of 511 pieces of ivory seized in Thailand in 2015.

A Red Notice is a request to law enforcements worldwide to locate and arrest a person wanted either by a country or an international tribunal, pending extradition, surrender or similar legal action. It is not an arrest warrant but an international wanted persons notice.

They were flagged after port officials in Thailand seized 3,127 kilogrammes of ivory valued at Sh576 million. The ivory was being shipped in a container labelled as tea leaves.

Through the Fugitives Investigative Support Unit, and in collaboration with the Environmental Security programme, Interpol published its list of wanted fugitives being sought over environmental crimes.

In a December 2018 report, Wildlife Direct said Mr Mweri and Mr Bakari were linked to the exportation of 6,400kg of elephant tusks from Kenya to Singapore in 2014, though they were yet to be arrested.

By 2018, half of all wildlife traffickers on Interpol’s most-wanted list were Kenyans linked to major trafficking syndicates of elephant tusks, pangolin scales and rhino horns. Gedi Ahmed Mahabub was on the list but has since been removed.

“Environmental crime is occurring on an industrial scale, with trans-national organised crime groups making billions in profits whilst undermining the rule of law and threatening national security,” Interpol said in a statement.