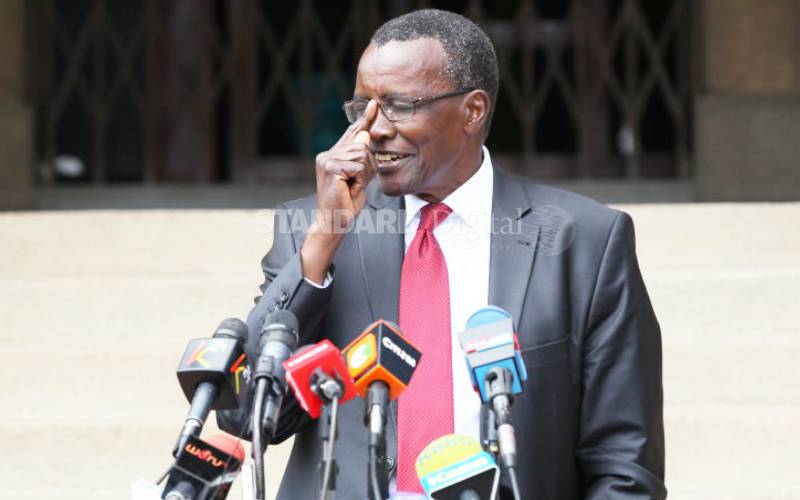 A letter by the National Intelligence Service (NIS) containing names of judges it had flagged has been expunged from court records.

The letter was part of an affidavit filed by the Judicial Service Commission and Chief Justice David Maraga (pictured) in a case seeking to compel President Uhuru Kenyatta to appoint 41 judges.

The case was filed by lawyer Adrian Kamotho.

Expunging the letter from court records means it can no longer be referred to in the matter.

JSC and Maraga’s lawyer Issa Mansur told Justice James Makau that he wanted to switch the former affidavit ‘with a new one which is complete.’

The new document does not have the four-paged document dated July 9, 2019 that contained names of some judges the NIS had flagged.

Attorney General Kihara Kariuki and lawyer Mr Kamotho, who is the petitioner in the case, did not object to JSC’s prayer to file the document which now removes the NIS letter from court records.

“Application for the first and second interested party (JSC and Maraga) to substitute the replying affidavit with a new affidavit is allowed and should be served to the parties,” ruled Justice Makau in a short ruling.

Meanwhile, daggers were drawn over Law Society of Kenya(LSK) prayers to join the case as an interested party.

On one hand, lawyer Kamotho, JSC and Justice Maraga supported LSK’s application to join the case while the AG objected, saying it had taken sides in the fight for the 41 judges.

AG’s lawyer Morris Ongoso argued that LSK was not adding any information to the case.

Meanwhile, the AG’s lawyer was hard-pressed to explain why his boss Kihara Kariuki did not comply with the orders of the court by calling a meeting for mediation.

Kamotho informed the judge that the AG never bothered to convene a meeting which was to be held within 21 days.

While supporting Kamotho’s sentiments, Issa told the court that although he is a member of the JSC, which is now protesting about President Uhuru Kenyatta’s failure to appoint the judges, he has been quiet all through.

“Regarding the order that you made that AG convene a meeting, I can confirm that there is no invite by the member of JSC or communication regarding the matter as yesterday,” Issa explained.

Justice Makau asked Ongoso why nothing had moved. According to the judge, the fight between the two arms of government maybe a simple issue that can be resolved if they discuss them in a meeting.

“We gave orders for the AG to convene a meeting to seek a settlement. This court took the seriousness of this matter and the effect to the public and these are two arms of government  fighting. We may be fighting over a simple matter which can be resolved,” said Justice Makau.