Jaguar in a cage after ‘kigeugeu’ fit of rage

By Nzau Musau | 3yrs ago 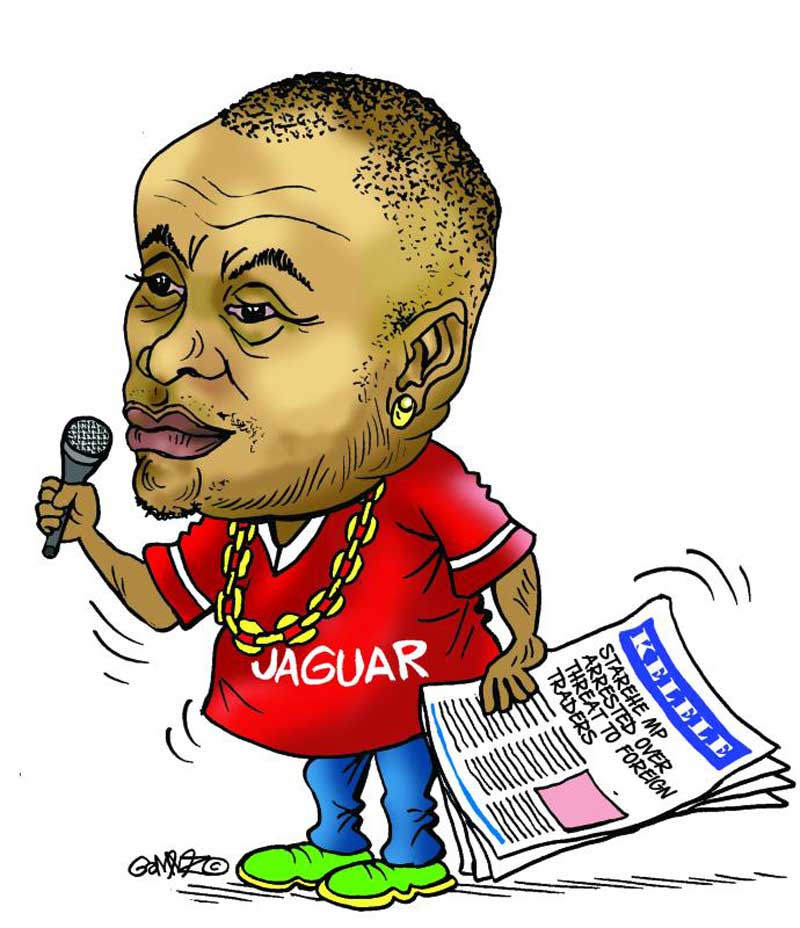 His alter ego, the aggressive jaguar, is reputed for his agility, calculation and power to take down the largest prey in the jungle.

But Charles Kanyi Njagua, the youthful Starehe MP, is carving out his own niche as a hasty, haughty, thoughtless and average windbag case study of our political jungle.

When he turned up at downtown Nairobi earlier this week to “defend his people” against external commercial aggression, the ‘Kigeugeu’ singer was spewing on all openings to the chagrin of both friend and foe.

Eyes twitching, lips snapping and dimples contorting, he opened up his putrid outburst with the archetypal politician intro “mimi nataka niseme leo” before lobbing his own foot in his mouth.

“I am giving the government (a) 24-hour notice, if these people do not go back to their countries, as the area MP, we will flush them out of their shops, beat them up and frog march them to the airport,” he retorted.

For all his bravado, when sleuths laid siege on him in Parliament on Wednesday, Jaguar walked out flanked on either sides by friends who interceded for him but in vain:

“Hakuna haja ya pingu,” they pleaded in chorus as the cops isolated him and cuffed his hands before driving him away. At the police station where he was held, his supporters tried to stage a demo in support of his freedom, but a few bursts of teargas scattered them apart. His parliamentary colleagues Moses Kuria and Nickson Korir were caught up in the melee.

“It is coming. I can smell it. The smell of a revolution is stronger than the smell of teargas we are taking here,” Kuria told a TV crew as he rubbed his teary eyes.

At the dock the following day, and despite the many acquaintances who turned up to lend him moral support, he looked like a rained on chicken: Tamed, uncertain, reflective. In Parliament where the tirade was discussed, he was receiving support from a likely quarter, Leader of Majority Aden Duale, but strictly for the message, not the manner of its delivery.

“Kenya is not a dumping ground… I can tell you for free, you might condemn Jaguar, but tonight, he is the most popular MP in his constituency… that’s how you get votes, by standing with your people.”

A product of the tortured Kenyan political culture, Jaguar tricked his way into national politics riding on his musical fame and hobnobbing with top Jubilee leadership.

Initially appointed a member of the National Authority for Campaign against Alcohol and Drug Abuse (NACADA), Jaguar honed his political skill in boardroom squabbles for a while. Armed with a celebrity name, dodgy academic credentials and access to the big man, he took a stab on parliamentary elections the following year.

When he was upstaged by “City Father” Maina Kamanda in Jubilee primaries, Jaguar wept in the streets. “Jagua usikubali, usikubali negotiation na Kamanda,” he was urged on by equally weeping fans as women padded his chest and hid his teary faces in their bosoms. In style and while cleverly rooting for talks, Kamanda likened Jaguar to his son: “He’s like my son, I have no problem with him. If he says Daddy let’s talk, I will not tell him no.”

Kamanda had his way and was assured a nomination ticket to Parliament. In turn, Jaguar was handed the ticket and he proceeded to fight a strong ODM machinery of Steve Mbogo to win Starehe.

He had barely settled in Parliament in October 2017 when he was involved in a fistfight with his colleague Babu Owino with every dog barking for its owner. At the time, Uhuru’s win had been invalidated by the Supreme Court and another election was in the offing.

Babu had called Uhuru a “caretaker President” and Jaguar would not take that lying down. When he showed up at the media centre to take on Babu, he was instead shoved back into the adjacent office of parliamentary media relations boss Martin Mutua. When Babu was led away from the scene, Jaguar followed him raining words on him and daring him. Babu turned back and a scuffle ensued. In the end, Babu proceeded in his direction as Jaguar walked the opposite direction.

For the next one year, not much was heard of him in Parliament until a few months ago when he stumbled on his way to move a motion, reducing retirement age from 60 to 50. Instead of slotting his card, he raised his hand, provoking reprimand and laughter.

Like many young MPs who swipe the age card and access leadership, Njagua is learning the ropes from his spoilt colleagues so well that he can hardly be distinguished from the elderly politicians in ignominy terms.

This weekend, he is spending what is perhaps his first weekend in police cells. When he shows up in court in the next few days, and obtains bail, he will predictably be celebrated as a hero by his colleagues. But lost in the celebration will be the effect of his conduct on the goodwill accorded to youthful leadership.