Gikomba Market Fires: When all is said and nothing is done...

On the morning of June 28, 2018, the nation was shaken. The cold chill of June significantly coincided with the news of a huge fire at the country's largest open air market, Gikomba, Nairobi.

Fifteen people died and over 70 others sustained injuries in the 2.30am inferno.

The fire had been contained by 4am but broke out a second time, prompting Nairobi County officials to declare the market a no-go zone.

The injured were rushed to Kenyatta National Hospital for treatment. While addressing media, acting KNH chief executive Thomas Mutie said, "five people sustained burns above 30 percent and were admitted in the ICU."

Nairobi Governor Mike Sonko then promised that a multi-agency team would be formed to investigate the cause of the fire and that the county government would also work closely with the Directorate of Criminal Investigations (DCI) to unearth the cause of perennial fires at the market.

No solutions have been forthcoming since his promise to look into ways of averting similar incidents in future.

In a clear case of when all is said and nothing is done, five months later, history would repeat itself. Several stalls were razed when a fire broke out on the morning of November 7.

Property of unknown value was destroyed as traders counted losses. Luckily, there were no casualties.

This not being the first time stalls at the market have gone up in flames, it raised a serious debate online, with netizens questioning the country's state of disaster preparedness.

So frequent are the fires that some have even labelled it "The Annual Gikomba Market Fire."

In October 2017, another huge fire swept through the market. It razed the fish and groceries section at about 3am. A spot check by the Standard showed that stalls were too compact, blocking roads and underground water points for fighting fire.

President Uhuru Kenyatta expressed shock at the tragedy and called for a review of the country's emergency services and its disaster preparedness.

"We owe the victims, and the people of Nairobi, a clear, credible plan to end these fires," he said. 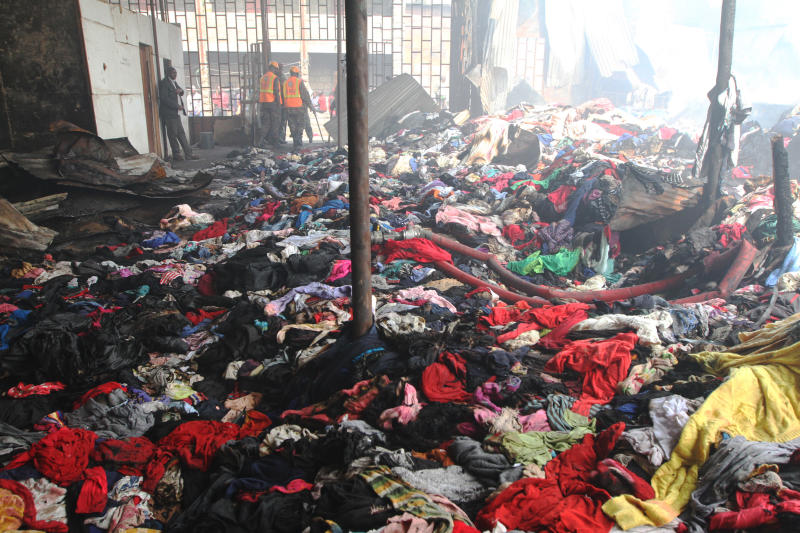 In September of the same year, another fire had consumed a section of the market. Traders said the fire had started at one of the stores before spreading to others.

There were no casualties in both but there was yet another empty talk about "preventive Measures".

June 23, 2015: Another fire. The inferno, which started at around 1am, left traders in tears. Then Nairobi Police boss Benson Kibui said preliminary investigations showed that the fire was caused by arsonists.

Despite the huge losses, the market always bounces back. All that remains now is the strong stench of sweat that welcomes you, perhaps an indication that its habitats remain unshaken.