The 42-year-old man in front of a court in the Southern District of New York looked dazed.

He was not sure where he was. And as he stood in front of one of the most thorough judicial systems, Baktash Akasha Abdalla cut an image far detached from the one he projected in Kenyan courts.

Here, thousands of kilometres from home, in the middle of a cold court room dressed in an orange jumpsuit, he was perhaps missing the 30-degree weather in Mombasa where he would face a judge dressed in a pair of slacks and a half buttoned shirt.

Beyond that though, what he missed the most was the fact that in a span of five years, he was able to manipulate the system through a series of well thought-out bribes that ran through the entire justice system.

For Baktash, no judge, prosecutor, policeman or lawyer was unreachable. For him and his empire, everyone was fair game.

Why war on drugs fires up our soft political underbelly

Everyone had a price and the Akasha Empire, for which he served as judge, jury and executioner, had the resources to sway the conviction of almost every man or woman who found himself face to face with him.

His journey to the courtroom may also have broken him further: A prisoner going to court from the Metropolitan Correctional Center, where Baktash is presented to federal marshals in the basement of the main prison building.

Shackled at the ankles, chained at the waist and cuffed at the hands, the prisoner hop-marches through an underground tunnel some 12 metres underground.

US media report that the prisoner and his escorts then go through channels, or corridors, with electronic doors at each end.

These are controlled remotely by officers who watch the journey via cameras.

More prominent prisoners, who need to be segregated from the general prison population, such as the notorious Mexican drug lord Joaquim Guzmán, alias El Chapo, who has had several stints in the facility are housed in the 10-South wing, which is noted for severely confining conditions.

During this passage from jail to court, no one lays eyes on the prisoner except the marshals and the people in the surveillance stations. Once they have reached the north end of the tunnel, they wait for the prisoner elevator.

Inside is a locked cage that the prisoner stands in for the ride up to the courthouse cells.

Unlucky for him, the American justice system is like a rabid dog -- once it locks its jaws around you, it doesn’t let go and you have to choose between leaving a pound of flesh between its infectious teeth or accepting defeat and facing your fate.

On that day, faced with the enormity of the evidence stacked against him, Baktash chose the latter. 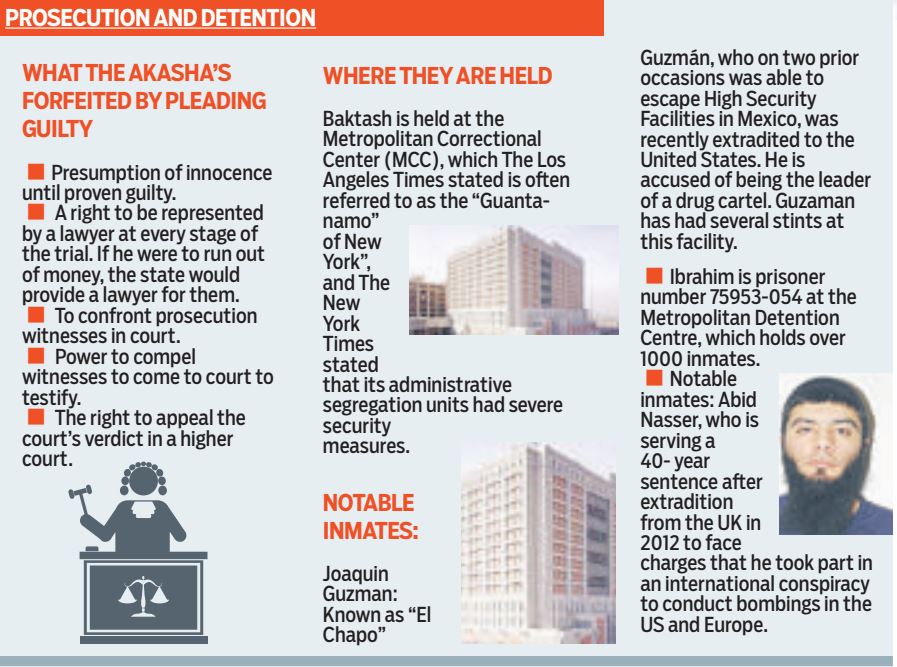 A set of 18 phones recovered in different homes that belonged to Baktash and Ibrahim Akasha is believed to have blown the international drug case wide open.

The data retrieved and listed as evidence in court proceedings from the phones has been downloaded onto 97 compact discs and is currently being analysed by the Drug Enforcement Agency, state prosecutors as well as the Akasha defence lawyers.

It is widely believed that the data, in form of recorded conversations spanning years, messages and communication on multiple platforms, might provide crucial evidence in the ongoing case that might end up nabbing top Kenyan judges, lawyers and prosecution officials who may have dabbled in the case.

It has also emerged that this crucial piece of evidence is just one cog in the wheel of justice that compelled the Akashas to plead guilty.

Copies of court transcripts accessed by the Sunday Standard detail the intricate questioning that went on in the New York courtroom before Baktash and his brother Ibrahim pleaded guilty to an array of offences that may see them spend the rest of their lives behind the walls of an American correctional facility.

The court records bring to the fore the two sides of the Akasha family.

One of sons who were prepared to do anything, including kill, to make sure the empire built on their father’s ingenuity, ruthlessness and callous risk-taking personality remained in their grasp.

But as the court official slowly interrogated the older of the Akasha brothers, the layers he had carefully constructed around himself, the layer of invincibility, the layer of a daredevil king, the layer of a man in control of everything and everyone around him, were slowly peeled off one by one, leaving behind a vulnerable, cornered lonely man with nowhere to run.

The sojourn away from home has not treated his younger brother any better.

“The defendant, Mr Abdalla, is a confidant of his brother, who is before the court next. His brother had been suffering from depression. His brother is currently incarcerated at the MCC. We would ask the court to recommend to the Bureau of Prisons, if possible, or ask the government to recommend to the Bureau of Prisons that the brother be transferred to the MDC, where this defendant is, so that he may have the emotional support and contact with his brother,” the Akasha lawyer asked the court at the hearing.

The two had been separated upon landing in the United States and have been held in different facilities since the deportation.