High profile cases worth over 224b pends in court, Haji report

NAIROBI, KENYA: The Office of the Director of Public Prosecutions (ODPP) has over 100 cases before the court involving more than Sh224 billion as of June this year.

The cases classified as high impact are traced from 2017 and involves senior government officials, Chief Executive Officers, Members of Parliament, deputy county commissioners, and members of county assembly among others.

During the period covered by the report, 53 cases involving top government officials were registered.

Cabinet Secretaries and Principal Secretaries were seven while governors and senior county officials were 11.

irectors, Members of Parliament, Deputy County Commissioners and Members of County Assembly were 22, 7, 1 and 5 respectively. 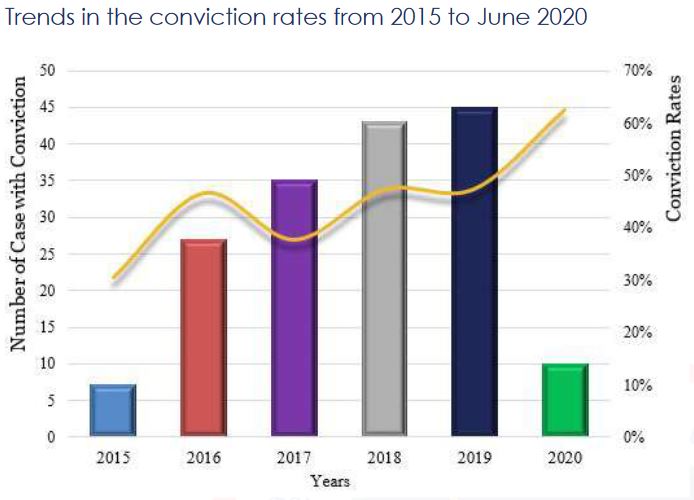 While receiving the report, President Uhuru Kenyatta called on ODPP to focus more on the successful prosecution of high profile cases especially those involving misuse of public resources.

The President said it is only through the successful prosecution of such cases that the agency will win and retain the confidence of Kenyans.

“Confidence is a fleeting thing. If people don’t see results, that confidence can also evaporate. It is therefore important that results are also shown to justify the investments we are putting in," he said.

He said an effective and efficient criminal justice system does not only builds confidence but also attracts investors, leading to the creation of jobs for the Kenyan youth.

“I want to encourage you. As much as we appreciate what you have done and what you are doing, I must emphasize the need to deliver results and the need to bring closure to cases.

"That is what will build the confidence, that is what will make the Kenyan public and the international community say, yes Kenya does have a criminal justice system that delivers and produces results,” Uhuru said.

The Director of Public Prosecution Noordin Haji said his office has prioritised corruption cases adding that the involvement of subject experts from various fields, such as financial analysts, had enabled the institution to recover corruptly acquired public resources.

“This has thus seen the prosecution of senior state and public officers in both national and county governments, recovered public property and funds that have been corruptly acquired and increased the conviction rate of corruption cases from 37.4 per cent in 2017/2018 to 63.16  per cent in the first half of 2020,” Haji said.